Guide Richard Lindsey shows you how to get the main ingredient for a Cajun Crappie Fry.

There are two things in this world that Richard Lindsey likes to do — cook and catch crappie.A native of Sibley, Lindsey has the perfect combination of occupations to fulfill his dreams. He’s part owner of The Golden Biscuit Restaurant in Minden and a full-time crappie guide on Lake Bistineau.

“I tell my clients that they can spend the day on the water with me at Bistineau and then go to ‘where your friends eat’ over in Minden at the restaurant,” he said.

When not occupied with either of those two pursuits, Lindsey is also a competitor on the Crappie Masters Tournament Trail, which takes him to some of the best crappie lakes across the country to compete with other well-known anglers.

While he enjoys the competition of the trail he’s also inspired by the camaraderie of the events. Staying true to his roots, the restaurateur enjoys cooking up a mess of crappie fillets for the competitors after practice days, and is even sponsored by the Cajun Fryer, a revolutionary fish-cooking system created by a childhood friend.

Winter is one of Lindsey’s favorite times to guide for crappie on the 17,000-acre natural-swamp reservoir known as Lake Bistineau. The lake is immensely popular for its diverse fisheries of bass, bream and catfish, but December marks the beginning of what Lindsey likes to refer to as “trolling season.”

That’s when he’s most likely to be found using multiple rods to slowly vertical-troll the edges of creek channels and old pond edges in search of Bistineau crappie.

“Bistineau was created by combining Dorcheat and Loggy bayous, both of which run into the Red River,” Lindsey said. “This used to be the navigational waterway in North Louisiana, and when they dammed up the bayou, it became Lake Bistineau.

“The lake averages about 5½ feet all the way across, but has a well-defined channel with some 20-foot water, and it also has some deeper water down the lake near a place we call ‘The Rock.’ There’s also a multitude of old ponds that will drop down into depths of 10-11 feet, and all of these bottom contours are great places to look for crappie.”

Lindsey knows the lake well, and has seen many developments along its banks and waters. His father and uncle worked with ox-pulled land tools to help create the levee that formed Bistineau, and he grew up along its banks back during the 1950s.

Lindsey indicated that back then there used to be a large number of privately owned commercial camps around the lake that catered to anglers, but the businesses have pretty much narrowed down to just three or four private camps and a large public state park. 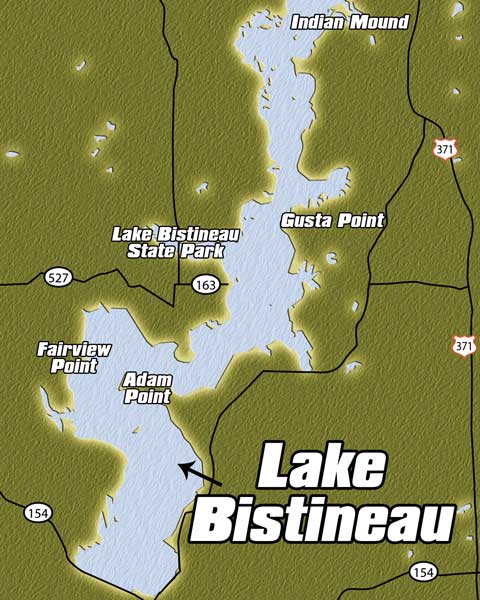 Currently, the lake is under a drawdown to combat an infestation of giant salvinia — a non-native aquatic plant. The drawdown has changed the look of the lake somewhat, but it hasn’t hurt the crappie fishing at all.

As Bistineau’s water temperatures begin dropping off into the 50s around the middle of November, the cooling water ushers in what Lindsey likes to refer to as “crappie season.” This is the time of year the guide will slowly troll in spider-rig fashion around the edges of ditches and creeks, and he may be out in the middle of the lake one day or near a deep cut along the bank the next.

“Most people around here use single rods to jig-fish around structure, which means that many times I’ll have most of the lake to myself,” Lindsey said. “I’ll run six rods out of the front of the boat and four or five more from the back if I have two clients who want to fish at the same time.

Although Lindsey likes to use only one jig per rod, many days he finds fish at two distinctly different depths. Straight out from Lake Bistineau State Park is an area known as Clark’s Bayou that’s a good example. Lindsey may locate crappie on the edge of the main channel that are holding a foot off the bottom under schools of roaming threadfin shad, while at the same time he may find fish holding to stumps or surface vegetation along the outside of the channel in only 8 to 9 feet of water.

“The baitfish are the key,” he said. “Bistineau has a very stable population of baitfish — threadfin shad, small gizzard shad, bream fry and other minnow species; the crappie usually aren’t far from concentrations of food, and they’ll move along the channel drops or the upper edge of any change in bottom contour waiting to ambush baitfish.”

Another favorite location for Lindsey is in front of Port o’ Bistineau, a commercial camp that used to be known as Noles Landing. Here Lindsey concentrates on the main channel to find crappie holding down in the channel. The bottom of the channel is in 18-19 feet of water, while the upper edge is about 14 feet deep.

Lindsey indicates the channel is some 40 yards across at this point, and he’ll target crappie on either side of the channel along the drop.

“The bite this time of year is not real aggressive,” he said. “It’s for this reason I like to use gold hi-vis line. I can see it better, and there will be times when I’m bumping along with the trolling motor at less than 1 mph and all you’ll see of the bite is a slight twitch or just some slack in the line.”

Another factor that helps put fish in the fryer is jig color. Lindsey’s standing rule is that he likes to match the color of the jig to the color of the water. If there’s been a lot of rain, he’ll opt for a darker color jig like a brown or pumpkinseed. On a bright, sunny day, he says it’s hard to beat a blue/pearl combination.

He prefers tube jigs over most other types, and uses a lot of Crappie Pro Little Wassa jigs. If conditions dictate, he’ll often tip the jig with a 2- to 2½-inch shiner minnow to add smell and movement to the bait.

“These Bistineau crappie will average about a pound during most of the year, but when the weather starts getting cold, they start putting weight on. They eat a lot of shad, and will bite just about anytime you find them,” Lindsey said. “I find that the wintertime average is higher — say in the 1¼- to 1½-pound range — and every so often we’ll find some bigger fish that get up near the 3-pound range.

“There’s nothing better than coming off the lake with a big-ol’ stringer of fresh crappie and cook up a mess that night. I like to refer to that as catch and release into the grease.”

Single-pole techniques can put plenty of sac-a-lait in your cooler if you understand how to get your baits in the right places or to the right depths. […]

Bass fishing in the singular; how to target big bass

How to single out and target that one big bass? Two Louisiana fishermen, Todd Risinger of West Monroe and Sontus Mitchell of Ruston, share their secrets. […]

About Phillip Gentry 16 Articles
Phillip Gentry is a freelance outdoor writer and photographer who says that if it swims, walks, hops, flies or crawls he’s usually not too far behind.