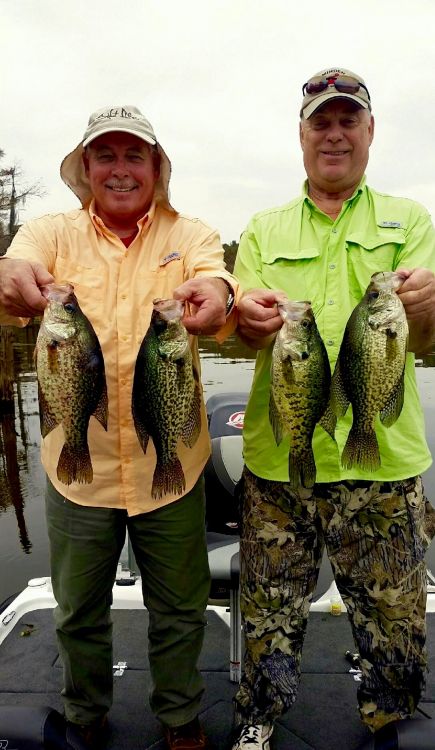 When you talk to a guy like Homer Humphreys, who has guided and fished professionally for more than five decades, and he’s excited talking about the fishing in a certain lake, you can bet it’s good.

“The lake’s been down 7 feet for a drawdown and as it comes up, the crappie are heading up the channels and creeks just like we head down I-20 to get somewhere,” he said. “You can follow the edge of that deeper water this month and find the fish staging to go in for the spawn. Then, if the water does warm up into the upper 50s, they are going to head for every tree and top on the flats they can find. And it’s on.”

The water level coming out of the drawdown is a bit uncertain, but Humphreys said adjusting to whatever is happening isn’t hard.

The main reason is that the lake is chocked full of big crappie.

“If we are getting lots of rain and the lake is coming on up, the fish will move up those creeks into Skinner Slough, Brushy Creek and all the sloughs,” he said. “They’ll stay there staging on the edges of those creeks until the water temperature gets perfect, then move in to spawn. The big females will move in a couple of days before that full moon, and it won’t last long with them, but the males will follow up and they’ll be shallow. The females will move back off to the edges of the creeks.”

One thing is certain for the spawn, Humphreys said.

“All the crappie don’t spawn at the same time. There will be several waves of them coming shallow,” he said. “But one thing is for sure, that first wave usually has the very biggest of the crappie in it. They are busting with eggs and ready to get it done.”

If the water doesn’t fill up the creeks, the fish will just move out into the flats close to where they are in the big channels, which will make them even easier to catch. They’ll be congregated more and it will be like fishing 1 acre instead of 4 to find them.

You can catch crappie on live bait like big shiners or jigs, he said.  Favorite colors are popsicle or gray ghost.

Of course, there is always the lake’s namesake Bistineau jig, a pink head wrapped with purple thread and chartreuse hair. More and more people are fishing the jigs under a cork — a tactic Humphreys recommends because it makes it easier to control the depth of the jig.

One thing Humphreys said is critical is fishing above the crappie.

Crappie only feed up, so if you get your bait below them, you’re out of luck. A good rule of thumb this time of year is to fish halfway to the bottom, no matter what depth of water you are in. If fish are hitting it and coming up, you need to shallow up a little bit more. If you are fishing a cork and the cork lays flat when they bite, that means they’re hitting it and coming up — so again, go a bit shallower.

Lake Bistineau State Park and Lake Claiborne State Park both have lakes that are chocked full of bass, bream, crappie and catfish. […]

The LDWF has scheduled a drawdown of Lake Bistineau in Webster, Bossier and Bienville parishes to reduce the expansion of giant salvinia. […]

When Tim Trahan of Arcadia caught a 2.24-pound bluegill on May 30, 2022 he momentarily thought he was hooked into a sheepshead in Houma where he was born and raised. […]