Like many other sac-a-lait fishermen, Bill McCarty is ready to make a well-placed cast, set the hook and pull in slab after slab when February rolls around in South Central Louisiana.

McCarty, an all-around outdoorsman from Morgan City, knows just the area to target to work on putting sac-a-lait in the ice chest during the second month of the year, weather and water conditions permitting.

He’ll point the bow of his boat east to fish the dead end and dogleg canals along Bayou Penchant and Bayou Copasaw, including the Bluebird Canal and canals off the Hooch.

“The Bluebird’s really good … just any of the dead ends off Bayou Penchant, or doglegs where you can get out of the wind and fish the back end. 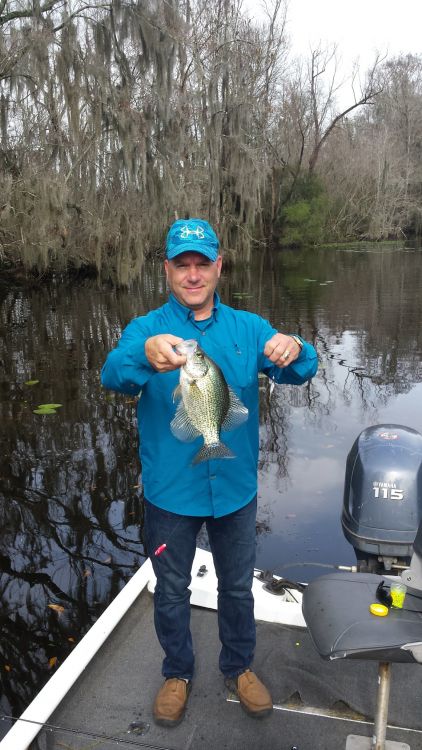 “The main deal is the water has to be pretty. Look for clear water where you can see the bait 18 to 24 inches down. A couple days of warm weather is all you need down there. Pretty water warms up quickly.”

Sac-a-lait start getting into spawning mode when the water temperature gets into the upper 50s and above, he said, noting they start spawning earlier than bass, but don’t all spawn at the same time. The sac-a-lait spawn will go into March and, even, April, he said.

Males move up first then, hopefully, females follow to spawn, he said.

“Sometimes you catch them feeding. Sometimes when you filet them, they’re full of minnows,” he said.

McCarty said to look for canals with clear water and with scattered grass. The sac-a-lait, which average 1/2 to 1 ½ pounds, could be 3 inches off the bank to 20 feet out, and in depths of 3 feet or less, to 6 feet.

He catches many sac-a-lait along undercut banks, he added.

For sure, he’ll have tied on a blue/white Poppa Chop hair jig (made by Paul “Chopper” Viator and his wife, Angela in Delcambre and sold at Ivy’s Tackle Box in Morgan City and Gayle’s Texaco in Maurice) with a chartreuse Crappie Nibble, or a blue/black/chartreuse Luck-E-Strike tube on a 1/16-ounce leadhead with a chartreuse Crappie Nibble. McCarty likes to fish under a very small, oblong Styrofoam orange/white cork — “the little bitty ones,” he said.

That way, when a sac-a-lait bites, there is as little resistance as possible.

He fishes for sac-a-lait with 6-pound line loaded on a spinning reel seated on a 5 ½-foot light action casting rod.

“It’s hard to beat a Zebco Delta 2,” he said about his reel choice.