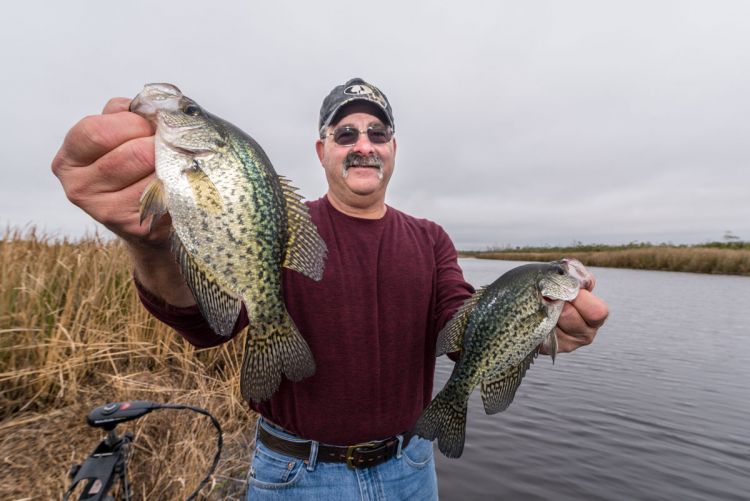 Sac-a-lait can spawn in the Lac Des Allemands area starting in January, but angler Tim Bye said this month is when it’s most likely the fish will pull onto the banks.

Especially with this year’s frigid winter.

“If you go in a canal and (water temps are) 65 degrees and you don’t catch any fish, there are no fish in the canal — they didn’t show up.”

The first key is to head to the dead-end canals around Lac Des Allemands, with water clarity being of paramount importance.

And then ignore all of the sloping banks. Instead, look for banks where the water drops immediately to at least 2 feet.

“There are stretches of canal that they’ll spawn on every year,” Bye said. “They’ll be right on the bank — right next to the cut grass.

“Where they’re at, they’re all together.”

He said once the water hits that magic number, he goes into a canal watching the banks, looking for slight surface disturbances that give away their locations.

“You’ll see there’s something strange about the water,” the die-hard crappie angler explained. “If you don’t see movement on the bank when that water is 65 degrees, move to the next spot.”

Bye uses a 10-foot B’n’M crappie pole to drop his jig right off the grass, targeting 2 to 5 feet of water.

“That’s where that long pole comes in handy,” he said. “I can put that jig right where I want it — I don’t have to cast. I can just pick it up and drop it down where I want it.

“I’ll catch three fish to your one (on a casting rig) because you’re too busy reeling in.”

But having the jig dangling at the same depth as the fish is critical.

“They won’t go down (to bite),” Bye said. “If they’re feeding, they might go up a little, but they’ll never go down.”

Bye’s lure of choice is a Crappie Assassin jig — he never fishes live bait — but he doesn’t have a favorite color.

“I don’t think color makes a difference,” he explained. “Crappie are reaction-bite fish.”

If a cold front pushes through and drops water temps, don’t get all worked up because crappie haven’t moved far — and if the spawn has already begun, there will still be some on the banks.

“Once the water temperature hits 65 degrees and the females drop their eggs, the males are going to stay on that bank no matter what,” Bye said. “They will sit on that nest; they won’t leave.”

“When they move up, they’ll spawn quick,” Bye said. “Two or three days, and they move back out.”

Fortunately, the spawn happens in waves, so there will be fish moving in and out of the shallows for the next several weeks.

And then they’ll disappear from the canal systems.

Bayou D’Arbonne is one of Todd Garvin’s favorite places to fish in August. The main bayou, especially right below the spillway, is a hotspot. […]