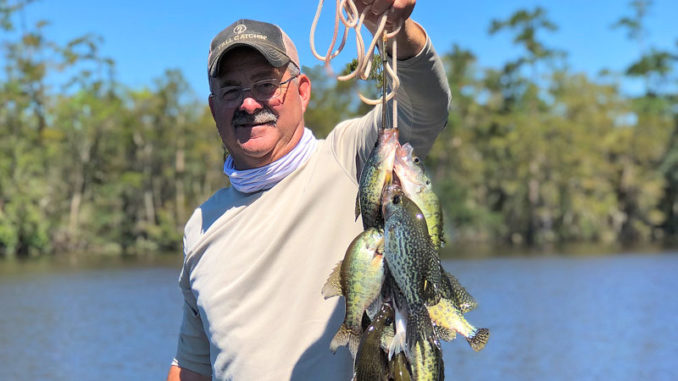 Sudden surge in small crappie should grow into Northshore bonanza

Studies show that crappie lay between 30,000 to 40,000 eggs every spring. Of the eggs hatched, it’s been estimated that one to three percent of the fry survive the first month of life.

Tim Bye of Folsom has been fishing the rivers and bayous on the Northshore for over a decade and said judging by the amount of small fish he’s seeing, the number of fry that survived last year’s spawn was at least three percent and he wouldn’t be surprised if it was pushing five percent. Bye uses a LiveScope which offers a detailed picture of what’s beneath the surface.

“I am seeing large schools of 3-inch fish all over, which is something that I haven’t seen before, at least not to the degree I’m seeing them now,” he said.

I received a call from Bye after he first spotted the phenomenon and he shared his thoughts behind the sudden surge in small crappie this year.

“If you recall in 2021, we saw a really rainy spring that ended with the wettest May on record for the Northshore,” he said. “As a result, we saw the rivers so high that the water was in the woods for weeks that month.”

Bye suggested that the high water offered the newborn fry enough coverage to survive the all-important first month of life.

After hanging up with Bye, I thought about what he said and decided to dive further into his theory. My plan was to contact numerous sac-a-lait fishermen on the Northshore and to question them about what they’ve been seeing recently. Here’s what I found.

My first call was to Ray Miller of Madisonville. Miller fishes the Tchefuncte River and recalls the rains of 2021.

“I remember fishing during that time because the sac-a-lait were hard to come by,” Miller said. “The high water made it difficult for fishermen because it was harder for them to reach the fish through the flooded brush along the shoreline.”

While he was unable to properly assign a length to the fish, he said that they weren’t big enough to inhale his bait.

“When I lowered my jig into the schools of small fish, I saw them swarming the bait, but they never hit it,” he said.

The sac-a-lait veteran conceded that the increase in small fish was most likely due to the extended high water in May of last year. Miller said he’s excited about the population increase in the Tchefuncte River and is catching upwards of 30 fish a trip with his largest fish measuring 14.5 inches and weighing two pounds. His lure of choice when fishing the Tchefuncte this month is a Panfish Assassin jig in Crystal Shad color.

Forrest Green is a native to Lacombe and has fished the bayou since he was a kid. Green’s opinion holds value to me since I know that he logs his trips in somewhat of an old fashioned way.

“My old Steno notebook,” Green said. “It’s still got the K&B price sticker on the back.”

The price reads 14 cents, but its value is immeasurable when it comes to its contents. Green’s logs coincide with Bye’s theory and even meshed with Miller’s observation that the fish aren’t quite big enough to swallow a jig.

“They’re all over, but we won’t see them hitting the ice chest until next spring,” Green said. “You talk about excited! Next spring is going to be something to write about! I may need to buy a new notebook,” he joked.

This month, Green has been catching fish in the main bayou off of structure such as tree tops and stumps in over 10 feet of water. His bait of choice for October is his homemade plastics that resemble a shad.

“Green and black is the ticket this month,” he said.

Farther east, Robert Kelly is a relatively young man without much history on the bayou. But what he lacks in wisdom, he makes up for in tenacity. Kelly said he’s been fishing the bayou at least twice a week and is seeing large schools of 4-inch fish which has him excited for next spring.

“In addition to catching some really solid slabs, I’m also seeing something new — giant schools of crappie,” Kelly said. “I first started noticing them in June and mistook them for balls of bait at first, then I noticed the small fish reacting to my jig the way a crappie would.”

Kelly said he’s catching anywhere between 15-25 fish a trip but said he’s had to move farther north in the bayou on account of the salinity increasing in the southern section of the river closer to Lake Pontchartrain.

“I’ve had to learn a few new spots upriver, but it’s all good,” he said.

Kelly said his primary bait this month is shiners under a slip cork with a split-shot on the line about five inches above the hook.

While most of the rivers are holding more small fish, there were two rivers that didn’t fare as well for two completely different reasons: The Tickfaw River and the East Pearl River.

Robert and Laitin Gauley are a father-son team that fishes the Tickfaw River regularly and also operate LiveScope. Robert told me that they haven’t seen any small fish after the hurricane, but oddly there seemed to be large ones that survived the pressure drop from the storm.

“I keep referring to Ida, but it’s hard not to when there is a clear difference from before the storm to after,” he said. Gauley said they’re seeing things that he and his son have never seen, including a plethora of shad in the river these last few months. Gauley said he thinks that may be the reason why the fish are bigger than normal right now.

“I’m thinking maybe the big sac-a-lait survived and now they have more bait to eat because the shad population is huge right now,” he said. The Gauley’s have been having success this month with a Bobby Garland 2-inch Baby Shad in the Bone White color.

“In 2021 the river was abnormally high all spring, but one thing about the East Pearl is if the water is moving too fast through the trees — those females won’t spray,” he said.

Guillot infers that the East Pearl is different from the short “run-off” rivers to the west.

“The East Pearl stretches 450 miles and has all kinds of tributaries emptying into it before it reaches us — so a really high river, especially in early spring, will result in a lack of spawning because the females know that their eggs won’t survive,” he said. “You have to remember that these fish don’t necessarily have to spawn; they can just absorb those eggs and wait for a more opportunistic time.”

In October, Guillot uses an assortment of tube jigs but emphasizes the importance of using shiners until the colder weather arrives.

“With this heat, these fish aren’t very active and more than often I see my best results using shiners,” he said.

As is usually the case with talking to crappie fishermen, I’m always amazed at the depth of knowledge they possess from years of fishing experience. And, they are always willing to share that knowledge to help others.

And while none of the research is scientific, you can bet they are on target with their observations.

It’s safe to say that the majority of the rivers and bayous on the Northshore are seeing a bumper crop of young crappie. Add in the resurgence of shad in the rivers from a healing Lake Pontchartrain and crappie anglers should be in store for a fantastic 2023 sac-a-lait season!

Steve Danna of Bernice has put on countless crappie fishing clinics both in public venues and for large sporting goods stores. […]