November marks the start of what sac-a-lait anglers across the state refer to as the “deep jigging season.”

The colder temperatures are sending sac-a-lait into the main rivers and with the transition comes an exciting time for those using electronics. Matt Schwierjohn of Raceland fishes the rivers on the Northshore of Lake Pontchartrain and said November is one of his favorite months to catch sac-a-lait. 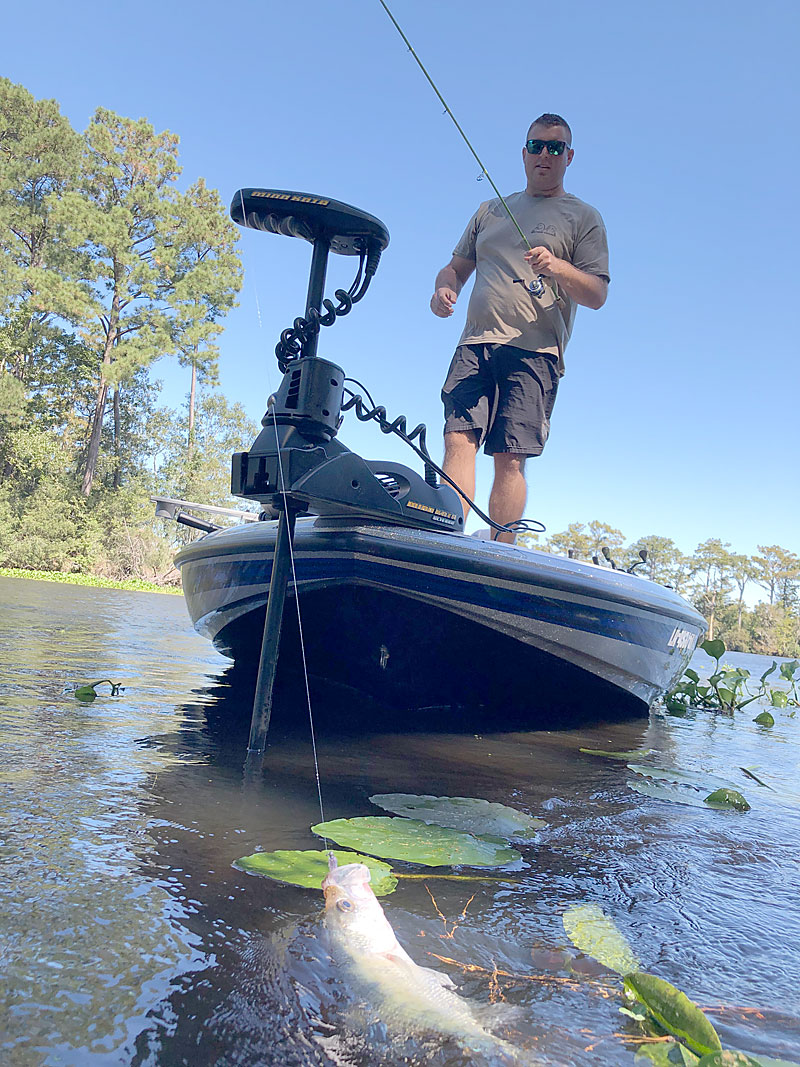 “I find the sac-a-lait school up tighter and are easier to locate in the deeper section of the rivers,” he said. In addition to the fish being grouped tighter, Schwierjohn said he finds that they are less hesitant to bite.

“They seem to feed more aggressively as the water temperatures cool down,” he said.

Schwierjohn uses Garmin electronics with the ECHOMAP 93SV for GPS, side scan and down scan. On his bow, he operates a Garmin GPSMAP 1022. The 28-year-old said that his setup has become invaluable when targeting sac-a-lait in deeper water.

“It has been an absolute game changer for me when fishing deep water,” he said.

On his latest trip, Schwierjohn was fishing the Tickfaw River. He was on the main river using his side scan in 20 feet of water when he spotted something on his screen.

“It was a brush pile with what looked like large fish suspended over it,” he said. “Every time I come across sac-a-lait suspended over structure, it gets me fired up because those fish are usually feeding pretty heavy.”

The excited angler lowered his jig down and when it was five feet above the school, four sac-a-lait shot up and tried to bite the jig.

Schwierjohn pulled nine sac-a-lait out of the school with all of them being over 10 inches.

In November, Schwierjohn stays in the main rivers and targets brush piles and tree tops that are in 15-20 feet of water.

He uses an 8-foot ACC Crappie Stix rod paired with a Lew’s American Hero reel. For line, he uses Seaguar Fluorocarbon and ties on his favorite bait — a Bobby Garland Baby Shad in the Bone White color. With fishing deeper, comes the need for a heavier jig head than what he normally uses during the summer months. Schwierjohn uses a 1/16-ounce jig head but also adds more weight with a 1/8-ounce split-shot clamped on the line about one foot above the jig.

The split-shot serves as a marker when dropping his line down into a school of crappie.

As November passes by and the colder weather starts to set in, the main rivers that pepper the Northshore of Lake Pontchartrain will hold large schools of quality sac-a-lait. The colder water temperatures will group baitfish tighter which also helps in keeping the sac-a-lait segregated to isolated areas in the rivers.

Schwierjohn recommends targeting the deeper rivers like the East Pearl, Tchefuncte, and Tickfaw Rivers on the Northshore.

Using your kayak to set out a dozen or more baited pool noodles (or jugs), is a fun and exciting way to catch catfish. […]