Almost heaven, and we didn’t even have to go to West Virginia

A 14 foot aluminum boat, one old beat up seat cushion and a vintage blue and white Coleman cooler that would make Yeti owners cringe. A hand powered trolling motor (that’s a paddle for you young whippersnappers so you won’t have to ask Alexa), a hand-steered 15-horsepower Yamaha and a half-dried up creek meandering through the backwoods of the Louisiana landscape.

And not another boat in sight. All day.

It was a real fishing trip. Just like a lot of us grew up making. The only thing missing was a can of vienna sausage, some hoop cheese and a fresh garden tomato about 11 a.m.

As John Denver sang, “Almost heaven…” And I didn’t even have to go to West Virginia.

“I have a special trip lined up if you are up for an adventure,” Wesley Miller’s voice boomed out over the speaker of my cell phone. “It’s called a fishing trip. Real fishing. No electronics. No fancy gear. Us and an old boat.”

“Anything special I need to do or bring?” I asked Wesley.

After settling into the middle seat and feeling like I might just be able to do this without tumping the small boat over, we headed down Bayou Dorcheat. It was a slow trip, which was just fine because there was plenty to look at and Wesley’s sage commentary made me feel like I had been there already.

The low water stage left the creek well within its banks, showing the root systems of age-old cypress trees and everything Mother Nature had placed here over centuries. Years of swift current had cut into the banks, formed sandbars and exposed river rock beds everywhere. Every runout had some sort of activity in the water. Small fish splashed in every direction. Each spot we passed looked fishy, but we forged ahead.

Bayou Dorcheat runs a long course through Northern Louisiana, but in the 115 miles from its source in Arkansas to its mouth in Lake Bistineau, there are surprisingly few access points. Most of the bayou is hidden away in forest and swamp land. The largest community that it passes by is the small town of Dixie Inn near Interstate 20.

We reached a couple of shallow shoals that required exiting the boat and dragging it across the shallows. And there was one time when Wesley had to jump a fallen tree and crash through the remaining limbs just to get to the other side. Fortunately, he put me out on the bank and I met him on the other side. There was now no question as to why boots were required.

We finally reached our destination that only the most adventurous would seek and found a shallow spot where Wesley and I traded places so he could run the hand powered trolling motor. That in itself was a sight. And as we passed in the middle of the tiny boat, it became apparent why he looked for a shallow spot. He wasn’t worried so much about falling in, but he didn’t want to lose either of the crappie poles or his tackle box, a small Zip-lock bag full of his special hand-tied hair jig “crickets.” 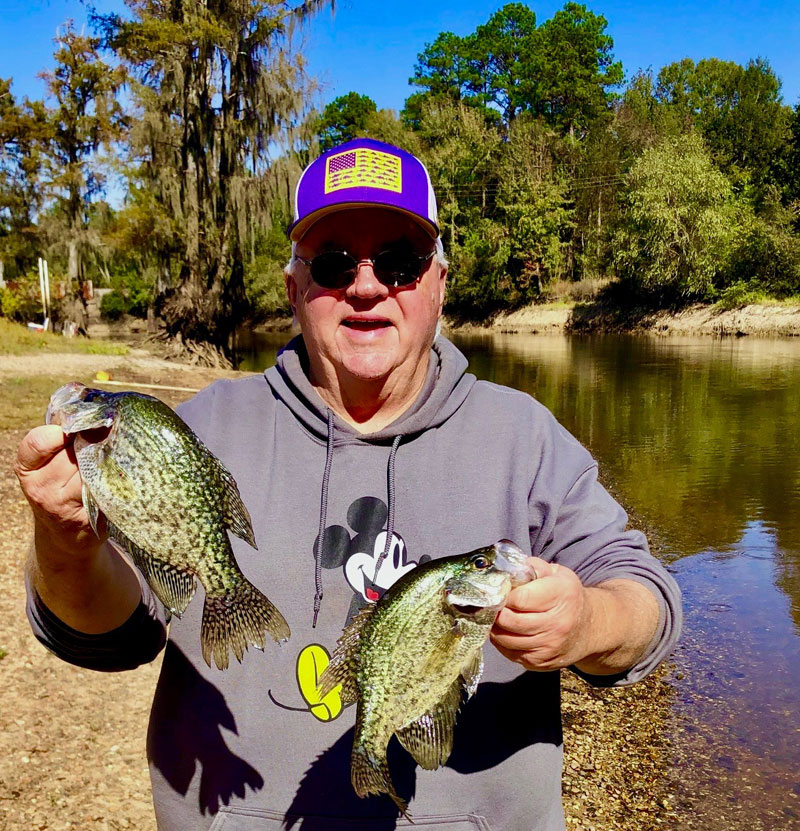 We eased up to the spot Wesley had caught about 20 the day before and he dropped a jig in the water. Bap! He caught one on the first cast. And the second cast. And the third cast. Finally, I got in on the action.

One bit my jig immediately. Or breathed on it. But I caught nothing. I dropped it in again. Another Bap! Not a thump, mind you. A Bap. I caught nothing. You would think these fish way back up in a creek would jump on anything, but they hit the bait almost like it was against their religion. If the severity of thumps were measured in calories, the way these fish hit would be called Diet Pepsi.

But I caught on. I was proud of myself. Like Daniel-san when Mr. Myagi told him, “Man who catch fly with chopstick, accomplish anything.”

With these fish, you had to drop it right on their head and set the hook immediately when they bapped it, almost before they bapped it.

As the morning wore on, we filled up the ice chest with crappie. Healthy one pounders, pound-and-a-halfers. Nothing huge, but all good eaters. It was so peaceful. I had looked at my phone a few minutes earlier and there was no cell service. Just a little red flashing message box that said, “Alexa doesn’t even know where you are.”

The best fishing spot of the day was where Wesley told me I could get out of the boat and take pictures from the bank, as I had requested earlier. We had just squeezed under a fallen oak that spread all across the bayou and came to a little natural beach. But now I was nervous. What if Sasquatch was still steamed over that time I didn’t bring the beef jerky? What if his distant Sasquatch relatives lived in the impenetrable thicket just behind me?

But I hopped out trustingly, roamed the bank and got some good shots of Sasquatch fishing and running up and down the bayou. And, most importantly, he came back to get me. I knew he would. But when I sat down on my little red seat cushion, something bit me. Or so I thought.

It was cockleburs, all up and down my britches leg. And on my jacket, and…well, everywhere. After standing up in the boat and picking them off everywhere I could reach, Sasquatch remembered that he should have reminded me to watch out for those bushes. There are no cockleburs in city fishing.

And, looking back, I don’t know if when he let me off on the bank, he was helping me with pictures or just having the good hole all to himself. But I didn’t ask. We were a long way from home and had nothing to eat but cockleburs.

Steve Danna of Bernice has put on countless crappie fishing clinics both in public venues and for large sporting goods stores. […]