When the water is blown out and murky from cold fronts, there may be no better time than January to drop a tight-line rig for central coast blue catfish.

The thing about blue catfish is that they are a big, river species and can reach upwards of 100 pounds. The state record is 114 pounds, caught in the Mississippi River by 12-year-old Lawson Boyte in 2014.

When the bite of most other gamefish along the coast has slowed during the winter, big blues are a good alternative for anglers looking for a fish coubion to warm their bellies at camp.

During the winter, cold-weather northers seem to blow in each week, but it doesn’t keep Harris Dehart, a fisherman from Berwick, from wetting a line or tossing a jug line. Dehart, who works as a welder in Morgan City, looks forward to the holidays. Around Christmas and New Year, he takes a little time off to fish the Wax Lake and Belle Isle areas near the Calumet Spillway and Atchafalaya Bay for blue catfish.

In the winter, the bayous and bays can be cold, shallow and murky. The right bait often comes into play when fishing these coastal waters.

“I’ll fish with beef melt in the winter. I’ve used river shrimp, deer liver, and worms, but I find it works better than the other baits I’ve tried when the water is so dirty,” Dehart said. “I’ll also use a smaller hook, something like a 2/0. Blue cats don’t attack a bait when the water is colder. They seem to nibble at it and take it slower than when they bite in the summer. The smaller hook seems to work better to me.”

Dehart also likes to fish in deep-water bayous that hold at least 6 feet of water. Blues, unlike their close cousins, channel catfish, tolerate waters with slightly higher salinities. Bayous like Big Beach, Little Beach, Greens, Big Hog and Little Hog all empty into the Gulf and are tidal, and the brackish waters will have increased salinity during the fall and winter months.

Joey Ratcliff of Morgan City has a camp below the ICW Canal down the Atchafalaya River. He targets blue catfish in a variety of conditions during the winter.

“I’ve caught them in several different scenarios, from mud flats in the bays to deep holes in smaller bayous to the sand bars in the river in 6 to 8 feet of water,” Ratcliff said. “Wind direction sometimes plays a role, too, in the coastal bays. It’s always better when there is a falling tide, but a hard, south wind will sometimes push the water and stall the normal dropping tide along the coast, slowing the bite.” 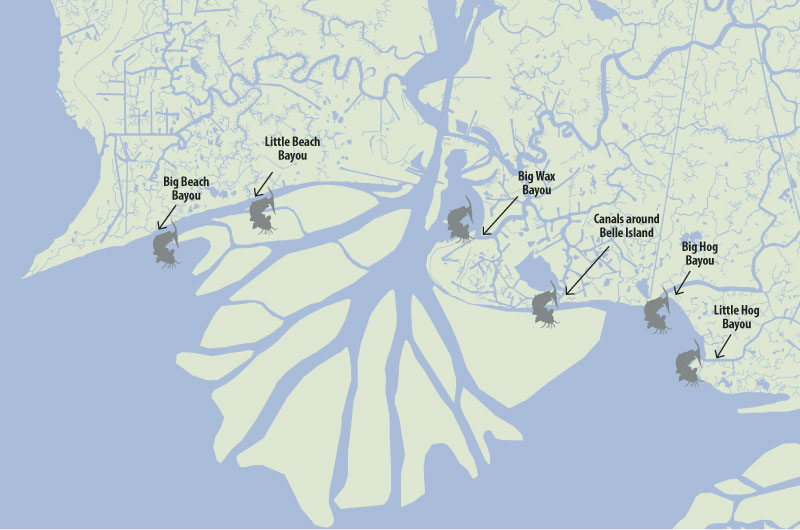 Ratcliff uses and recommends 20-pound monofilament with a 2/0 Kahle hook attached for coastal blues. Typically, when fishing deeper bayous, particularly those with big curves or bends, there will be a backwater eddy that fishermen should look for.

Ratcliff has thrown into these eddies and come away with numerous blue cats weighing 10 pounds or better.

Drop rigs for tight-lines will require an assortment of weights, depending on depth and size of the bayou. A good selection of bank or pyramid sinkers ranging from ¾- up to 4 ounces in the deeper Atchafalaya River waters is recommended.

If you have a hankering for a good catfish coubion this winter, it’s time to get out after the holidays and chase a few cold-water cats along the central Louisiana coastline.

Not only are catfish fun and relatively easy to catch, but they also make for excellent table fare. Try out this Catfish Piccata recipe. […]

Palmetto Island State Park and Sam Houston Jones State Park both feature just about any activity you’d like to pursue in the outdoors. […]

The Senate is expected to give final passage to a pair of bills that would create new ways for sportsmen to hunt and fish in Louisiana. […]

About John Flores 145 Articles
John Flores was enticed in 1984 to leave his western digs in New Mexico for the Sportsman’s Paradise by his wife Christine. Never looking back, the author spends much of his free time writing about and photographing the state’s natural resources.