And then there’s Rhesa Walston of Washington, N.C., who hit a catfish while driving home from her mom’s house on the evening of Dec. 18. Or rather, the catfish hit her. And Walston wasn’t driving a boat.

Walston, an office manager for Le Moulin Rouge de Danse and part owner of Basic Bag Wurx in Washington, N.C.. was driving the backwoods of eastern North Carolina when a bird — possibly an osprey, eagle, or hawk of some kind — dropped a keeper-sized catfish onto the passenger side of her SUV’s windshield.

Both the fish and windshield suffered irreparable damage. Walston shared a few photos of the incident on her Facebook page and has gotten more than 27,000 reactions and more than 14,000 comments. Her post has been shared more than 138,000 times. 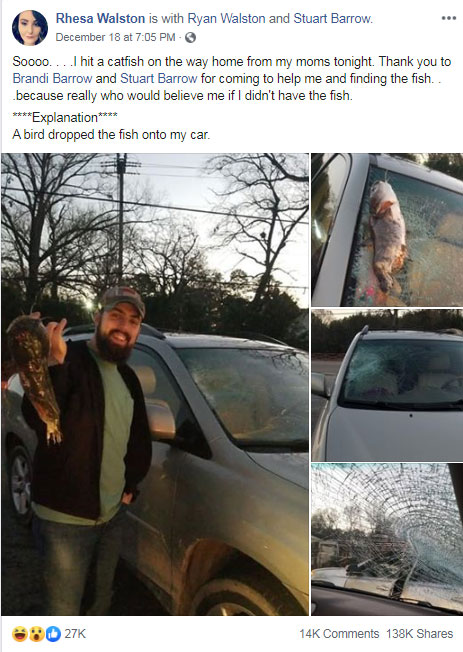 Walston said she’s been contacted by two national TV stations about her story. She’s currently driving a rental car while waiting for a new windshield. And it looks like she’s kept a good sense of humor throughout.

“My greatest worry now is getting on national TV and sounding like a bumpkin. However, it is difficult to explain this situation and not sound like a hick,” she said.

This story first appeared on CarolinaSportsman.com.