Caney Lake is truly the home of monsters holding 12 places in five different Top 10 records. Among these are state record largemouth bass and redear sunfish. Others include black crappie, yellow bass and bluegill, according to the Louisiana Outdoor Writers Association’s report from 2017.

On Aug. 3 at 2:00 in the morning avid bass fisherman David Norman was flipping a 12-inch Texas Rig Mag Worm under a dock at Brown’s landing on an underwater light when he found himself fighting a behemoth for over 20 minutes.

“I was putting a little gas in the boat, saw an underwater light about 50 yards away, and saw a couple of gar on it and saw a big shadow cross. So I picked up the only rod with braid on it and made two casts and then he hit,” Norman said. “Then I thought if this is a bass then I would never have to fish again.” 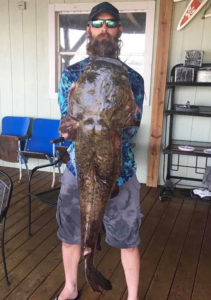 The shadow that piqued Norman’s interest turned out to be the largest flathead catfish he had ever seen, also an abnormal catch for Caney Lake. Norman weighed the fish at the official scales nearby and topped them out at 50 pounds. After topping out the official scales, Norman called Louisiana Wildlife and Fisheries for more information on how to report it but had trouble getting a marine biologist to weigh the fish.

During this time the catfish was sitting on ice and, not to let good fish go to waste, Norman donated the fish to a friend that could use it. His friend weighed the flathead on his deer scale which brought its unofficial weight to 67.3 pounds, which would have been the new No. 2 in the state.

There are many stories like this where someone believes they have a possible record fish but do not get it weighed officially. Anglers should always remember to weigh the fish on an official scale.

According to Ryan Daniels with the LDWF office in Monroe, the Department of Agriculture and Forestry certifies all of the scales in Louisiana and there are many businesses which have these scales. Smaller fish can easily be weight at grocery stores and meat markets while larger fish might be weighed at saltwater marinas and post offices.

According to Lyle Johnson with the Louisiana Outdoor Writers Association, the rules for weighing record fish have recently changed. If the fish is a state record it still must be physically identified by a biologist, but second through tenth place fish can now be photographed on either side and sent in along with a Louisiana record application .

Johnson said that anglers can also get their own scale certified by the Department of Agriculture and Forestry for 35 dollars.

John Biscoe of Jarreau caught a 56.38-pound flathead near the Red River hydroelectric locks on fresh-caught skipjack back in April. Unlike the aforementioned story about the missed opportunity to verify a possible record, Biscoe was able to log his catch in the record book.

“I took it to Leblanc’s Processing right there in Morganza and had it weighed on a certified scale,” Biscoe said. “The following morning I just went to Baton Rouge, to the DNR (Department of Natural Resources) down there and had it certified, filled out all the paper work, which was then sent to the Louisiana Writer’s Association for the record book.”

Biscoe’s flathead ended up taking the No. 4 spot for rod and reel in Louisiana’s Top 10.