If Derek Hudnall of Baton Rouge had just one artificial lure to use during March, what would it be?

The 48 stick worm looks different from other soft-plastic stickbaits because it’s a little thicker on each end, a physique, Hudnall said, that gives it a different profile and presentation as it falls in the water column. He said the heavily salt-impregnated soft plastic has an “enhanced fluttering action as it falls super-slow, super-subtle.

“It’s super-dense. When it falls, you’re going to have enhanced wobbling,” he said. “Oh, gosh, I’ve thrown those since really since they released them, probably three, four years.”

Hudnall planned to fish the 48 in the first Bassmaster Elite Series tournament of 2020.

“Hey, (this) time of year, it’s hard to beat. It’s hard for the fish to stay away from it,” he said, adding it triggered key bites in several tournaments for him throughout the year. 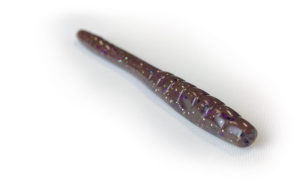 Hudnall, 39, boated an 8-pound bass on a junebug 48 in an Elite event last year on Florida’s St. Johns River the second week of February. He saw and missed the bass a day earlier and made a beeline for it the next morning. He offered the 48, which he had Texas-rigged under a 1/8-ounce weight, on his first cast and set the hook.

Hudnall caught another 8-pounder on the 48 in an Elite tournament six months later on New York’s Cayuga Lake.

Most of the time, he said, he fishes it wacky style on a 2/0 Gamakatsu G Finesse Dropshot Hook. It’s rigged without a weed guard 99 percent of the time; if one is required, he’ll make his own light-wire weed guard. He’ll fish it on a spinning outfit: a 7-foot, medium-light St. Croix Legend Extreme rod and a Shimano Stradic C14 reel. He loads the spinning reel with 15-pound braided, usually Seaguar.

“I’ll put like an 8- or 10-pound fluorocarbon leader on the braid, depending on where I am. I tie an Alberto knot. It’s super small, pretty easy to tie. I think we all have a little different variation of the Alberto rig, but basically they’re all the same,” he said.

Hudnall Texas-rigs the 48 for certain water and structure conditions. On the St. John’s River, for example, the water was dark and, for the most part, bedding bass were difficult to see. The bass were on certain weed clumps; Hudnall he would fan-cast with a Texas-rigged 48.

“If I can see them and the water’s clear enough, I can back off and use a wacky worm,” he said.

Hudnall’s favorite colors are junebug or black, especially in stained or dark water, and green pumpkin or some “more natural” color in clear water under sunny skies.

According to Missile Baits, the 48 with a nail weight in the rear produces a revolutionary backwards descent with shimmying when rigged weightless Texas-style.