Simply put, Major League Fishing has decided to make small big! And they are doing it in Louisiana.

The world’s largest tournament fishing organization is opening its 2022 Major League Fishing Bass Pro Tour with a six-day event on three small north Louisiana Lakes. The first four days of the elimination event are on 16,000 acre Lake D’Arbonne in Farmerville. Day 5 will be held on 2,200 acre Caney and the championship will be on the newly renovated 2,000 Bussey Brake Reservoir in Bastrop on Day 6.

But while the lakes are small, the catches could be huge during the Feb. 5-10, 2022 events. First, let’s talk fish. Caney Lake holds six of the top 10 bass spots in the Louisiana state fish records. Last summer, Bussey gave up a new lake record almost 13 pounder. D’Arbonne has large numbers of 6-8 pound bass and it won’t be surprising to see a couple much larger caught. Then there’s the $100,000 prize that goes to the winner in the 80-angler field. A total of almost $800,000 will be divided among the field, where every angler takes home a check from the tournament.

“I think it is awesome, said Bass Pro circuit member Cliff Crochet of Pierre Part. “I’m so thankful that the Visitors Bureau up there brought this to promote our state. It’s fantastic. Fishing on smaller lakes like that offers some challenges, but the format of MLF makes it possible. And we throw every fish back immediately after it’s caught.” 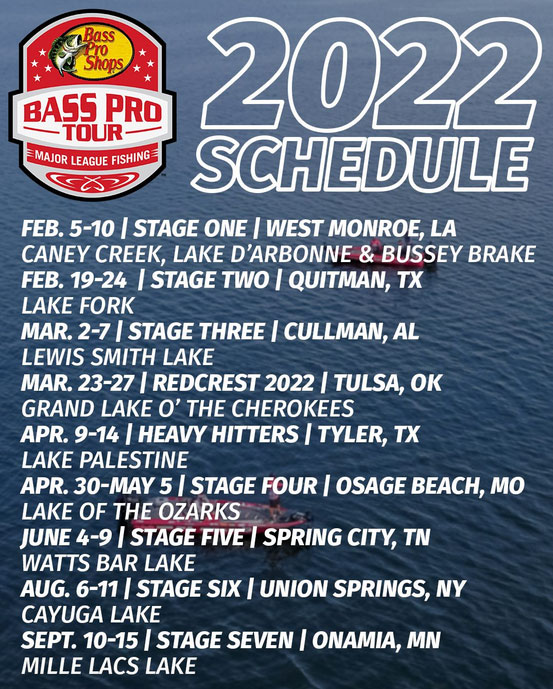 Crochet says in February, the pre-spawn patterns like throwing a jerk bait, Rat-L-Trap or flipping jigs and plastic will probably be the key techniques.

“It doesn’t matter whether you are on a big lake or small lake, that’s what you do this time of year,” he said.

Louisiana angler Gerald Spohrer of Gonzales also fishes this tour. Anglers make it to the Bass Pro Tour through other MLF qualifying circuits.

In case sportsmen worry about pro anglers hurting these water, MLF has no traditional weigh-in. Fish are caught, digitally weighed and recorded in the boat by a trained MLF marshall and then immediately released back in the same spot they were caught from. There’s even a penalty should the angler drop the fish in the boat. That shows how important protecting the fishery is to them.

And you can almost “be in the boat” for the whole thing as it is broadcast live on MLF NOW! and streamed to the Major League Fishing app, MyOutdoorTV (MOTV), and on MajorLeagueFishing.com.

Each stage will also then air on the Discovery Channel, beginning in July, 2022. Anglers can watch the action and see what they are catching, the lures they are using and the techniques that work for these pros.

How the competition works

On Day 6, the competition and the Top 10 anglers will move to Bussey Brake in Bastrop to determine the champion. On this day, all competitors will begin anew with ZERO WEIGHT. Whoever catches the most total weight at Bussey will be the champion.

“We are excited to host Stage One of the 2022 Bass Pro Tour on the beautiful waterways in Northeast Louisiana Sportsman’s Paradise,” said Scott Bruscato, Senior Vice President of the sponsoring Monroe-West Monroe Convention & Visitors Bureau. “We hope to create a memorable experience for all of the anglers and wish them good luck as they travel to Ouachita Parish in hopes of winning a championship.”

“I can’t wait to get up there,” Crochet says. “The lakes are off limits 30 days prior to the event. I’ve fished Caney and D’Arbonne before and look forward to fishing on all three of them. The coverage from this event will blow folks away. Louisiana has a lot more to offer than hurricanes and broken levees. We need to show folks that.”