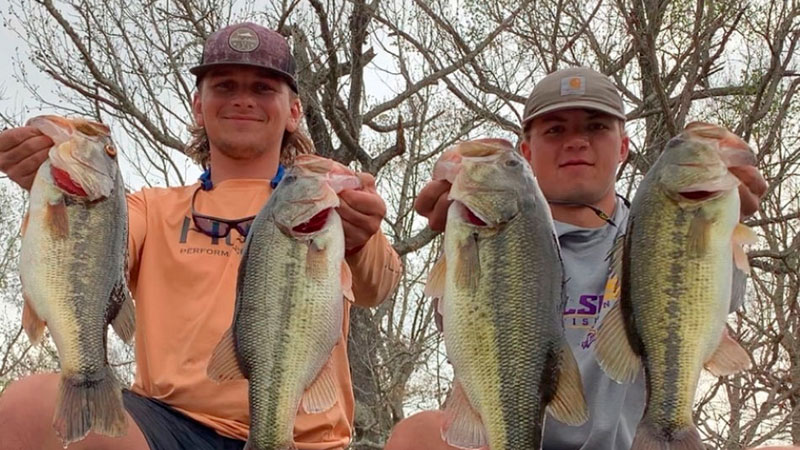 Thanks to a single stump in Alabama’s Lay Lake, Tripp Bowman and Blakely Young of LSU-Shreveport qualified for the Bassmaster College Series National Championship on New York’s St. Lawrence River.

The Stump, as it will be known henceforth, gave up quantity and quality bass during the Bassmaster College Series Wild Card tournament June 23-24 on Lay Lake. Bowman and Young finished fifth in the 103-team field with 11 pounds, 15 ounces the first day and a 16-pound, 9-ounce sack the second day for a 28-pound, 8-ounce total.

“Nobody else figured out that fish were on that stump,” Bowman said. “For some reason, the fish were stacked up on one stump. The amount of fish on that thing was just ridiculous. We probably caught 20 or 30 (keepers). Every fish we weighed in was off that stump.”

Bowman said they would let it rest and target other areas where they had pre-fished successfully but caught smaller bass.

Young said they looked around the lake for characteristics similar to Toledo Bend, but many of Lay Lake’s creeks lacked channels, he said.

“We went into this creek because it had a little channel through it. We were looking for something like (Toledo Bend’s creek channels), and it worked out. We were working along a grassline. Tripp turned around and threw at this stump.”

He immediately caught a nice bass.

The Stump, located in 4 feet of water near 6-foot-deep water, proved to be a gold mine. The best thing was they had it to themselves, and they worked it over, drop-shotting 4½-inch Roboworms, jerkbaits and bladed jigs. The worms worked best.

The lofty finish was one of the highlights of the 2020-21 season for Bowman, a rising sophomore from Haughton, near Shreveport, and Young, a rising junior from Carthage, Texas.

Passion for the outdoors

Bowman, 19, who worked part-time this summer at Bayou Outdoor Powersports in Bossier City, started “serious” bass fishing at 13 with his father, Ben Bowman, and he fished high school tournaments in the eighth grade, although he was ineligible to qualify for nationals.

“I’ve been fishing tournaments all through high school and now in college,” said Bowman, who looks up to bassing legends like pros Kevin VamDam and Jacob Wheeler. They aren’t his heroes, per se.

“I guess my main hero is my dad for giving me the passion for the outdoors, getting me into fishing and hunting when I was a little kid,” said Bowman, an avid deer hunter who qualified for nationals each year in high school with Matthew Nesbit. As freshmen, fishing for Haughton High School, they won the 2017 FLW High School Fishing Louisiana Open on the Ouachita River. They won another state title as seniors in 2020 at Toledo Bend.

“Me and Matt kind of have everything down; we’ve been fishing together so long. We’ve been friends since we were young. We know each other’s strengths real good,” Bowman said.

“I’ve always loved fishing tournaments since I started doing it in high school. You’re fishing against your buddies but you’re still buddies. Traveling to tournaments with all your buddies is fun,” he said, adding good-natured trash talking is part of it.

Nesbit was unable to fish the Lay Lake tournament, as was Young’s college partner, so Bowman and Young hooked up and showed out.

Bowman’s goal is to keep fishing tournaments after college.

“It was great doing well over there. I just did well in the Lake O’ the Pines tournament, too,” said Young, who also finished fourth with LSU-S teammate Tyler Tamburo of Bossier City on June 11 in a Major League Fishing college event.

Young, 21, is unsure who will be his tournament partner in this, his junior season. He previously did most of his fishing with Jeremy Severick of Shreveport, who has graduated.

“He’s a pretty darned good coach,” Young said. “He does a lot for us, makes it a lot easier to get into these tournaments and fishing them. He helps with our sponsors, too. He gives us advice on a lot of different things.”

Young got his start on the water with his grandfather, Claude Griffin.

“My paw-paw had me out there in a boat when I was 5 years old. He’s the one who got me into fishing,” said Young who still fishes with his grandfather — who travels to all his tournaments.

Young began fishing tournaments at age 10 with Griffin, focusing on the annual Oilman’s Bass Classics on Toledo Bend, which he considers his home lake.

His favorite artificial lures are Flutterspoons and Strike King 10XDs or 8XDs. Bowman, he said, insisted on getting lessons on using Flutterspoons, and he obliged.

Over the summer, Young does something he loves; he teaches marine electronics classes.

“I fish offshore 90% of the time now, so I know it pretty good. I thought I’d start teaching people,” he said.

The most critical thing about learning marine electronics is confidence. He offered some advice.

“They’re hard to figure out, but once you get them figured out, it’s easy to dial in. You’ve just got to trust them,” he said.

Hopefully, he said, bass fishing is in his post-college future.

“Man, I’d love to go pro. It’s always been a dream of mine. I really like Bassmaster and how it’s set up. MLF looks fun, too,” he said.