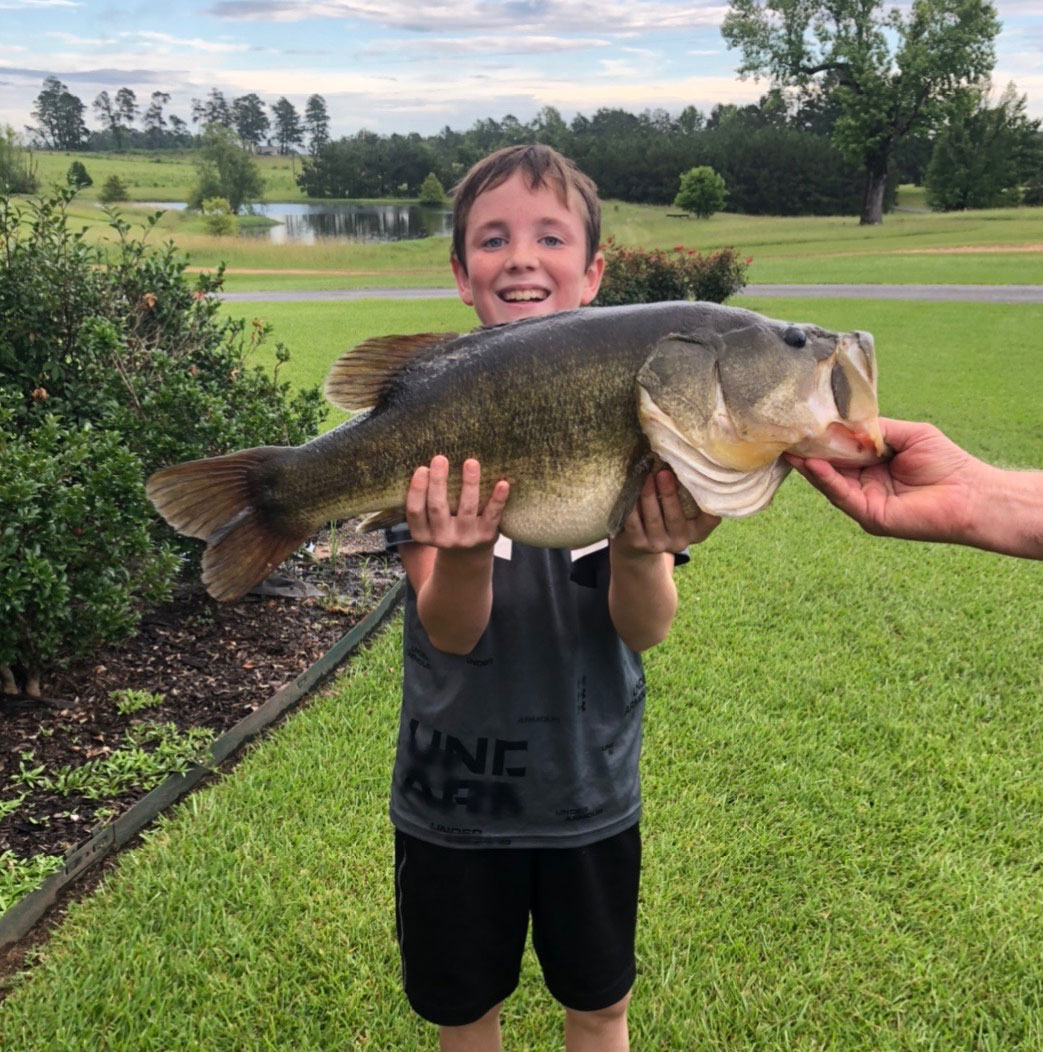 On July 18, 10-year-old Landon Smith of Natchitoches caught a bass that’s a personal best that will be hard to beat. The monster largemouth weighed an impressive 12.05 pounds. It was so large that the fifth-grader was struck speechless for a time on the bank after landing it.

Smith caught the bass while fishing with his grandfather, Rodger Smith, on a private pond near Atlanta, La., at approximately 5:45 p.m.

That afternoon, they set off for a 3-acre pond on the family’s property. The sky was overcast, but bright. An easy breeze greeted them as they approached the water, rustling the alligator grass and willow leaves. A stand of cypress trees stood still and silent.

“Pawpaw and I went down to the pond to fish,” Landon Smith said, “and when we got there, I saw this little swirl in the water.”

He appreciated the opportunity for what it was, and cast a plastic worm to the site of the commotion. The bass hit the lure, but not with conviction. Landon reeled in and cast a second time. Persistence did the trick.

Wham! A bass slammed the bait in about 3 feet of water.

“After I threw it over there the second time, the bass hit it,” Landon said, “and when I set the hook, I thought I’d hooked into a log.”

A dream fish on his line

But it was not a log, no sir. The youngster had hooked into the kind of fish men dream of catching, some until their fishing days are done.

He’d hooked the fish with a Lew’s Mach 2, rod-and-reel combo and a Culprit worm, fire-and-ice color, Texas-rigged with a small bullet weight.

“It took him not longer than a minute to reel it in,” Rodger Smith said. “He was fishing with a 50-pound test line.”

Landon was in shock after landing the massive fish. His grandfather helped him lug it onto the bank.

“I was surprised,” Landon Smith said, “and I was really excited.”

“He was so excited, he couldn’t talk at the time,” Rodger Smith said, chuckling.

Landon Smith tried to revive the fish so it could be released back into the pond, even placing the bass into a bathtub in his attempt, but it was not to be.

“I dropped it a couple of times,” Landon Smith said. “It was so heavy.”

In the end, the Smith’s decided to mount the fish and keep it as a memento of a special experience in Landon’s budding outdoors life, an outdoors life that began with fishing trips with his grandfather when he was only 3 years old.

Pursuing the life of a sportsman

“This is not the only big fish he’s caught,” said Marilyn Smith, Landon’s grandmother. His previous best was a 10-pound bass, and he’s caught a few 8-pounders and several 5-pound fish to boot.

“He’s just got a natural knack for it,” she said. “It’s uncanny how well he can place his (casts).

“He’s an all-around sportsman,” Rodger Smith said. “He loves the outdoors and all types of hunting and fishing.”

Landon, who has taken three deer to date, is excited about the 2021-22 season.

Ryan Semmes of Crowley landed his personal best largemouth, an 11.79-pound whopper, working a submerged creek on the south end of Toledo Bend. […]