The sun was low and bright, but the air was unseasonably cool and pleasant. It was a Thursday evening: 7:15 p.m. on Sept. 23, to be exact. The fishermen had been on Lake Dauterive since about 5 o’clock. Neither man had reason to suspect that a 9-pound, 13-ounce bass would soon turn a leisurely, after-work, fishing trip into a moment in life to celebrate.

Dillion Bordelon, a 25-year-old fisherman from Hessmer, had suggested to his friend, Johnathan St. Germain, an aircraft mechanic from New Iberia, that they go fishing. St. Germain had been on Bordelon’s mind in the preceding days for a couple of reasons.

First, his friend’s home had been wrecked by Hurricane Ida. St. Germain lived on the bayou in a fishing camp he’d turned into a residence. During the storm, the first floor of the house had been wiped out by floodwater.

“The kitchen and other downstairs rooms are gone,” St. Germain said. “All the windows upstairs are blown in, and half the roof was taken off—it’s basically a total loss.”

Second, Bordelon knew that it was his friend’s 24th birthday. He’d guessed a few hours of fishing would be welcome. After all, it had been a turbulent month for St. Germain.

A slow bite on a beautiful evening

The men had caught a few bass earlier in the evening at the mouth of a large cove full of laydowns that stretched away from the main lake along a creek channel. But the bite had slowed, and then stopped, as they’d moved deeper into the cove.

“We turned the boat around, and went back to the mouth of the cove,” Bordelon said. “The mouth opens up into the main lake, and there are some big cypress trees there; we’d caught most of our fish right where the cypress trees stopped, and the laydowns that litter the cove started.”

The current was strong at the mouth of the cove. A large stand of cypress trees protected the point, and Bordelon suspected shad were schooling there.

“So, I tied a (white) spinnerbait onto his line, thinking ‘Let’s go hit this stuff with an action bait, and see what we do,’” Bordelon said. “On the second cast, (St. Germain) threw to the left of a cypress tree, and I threw to the right.”

From the murk, a monster takes flight

“As I’m reeling in my line, I hear some water splashing, and when I look back, his rod is bent all the way to the handle,” Bordelon said. “Based on the way the rod was acting, my first thought was that he’d set his hook on a tree stump.”

“You’ve hooked up on an alligator or a stump,” Bordelon said, taunting his friend. 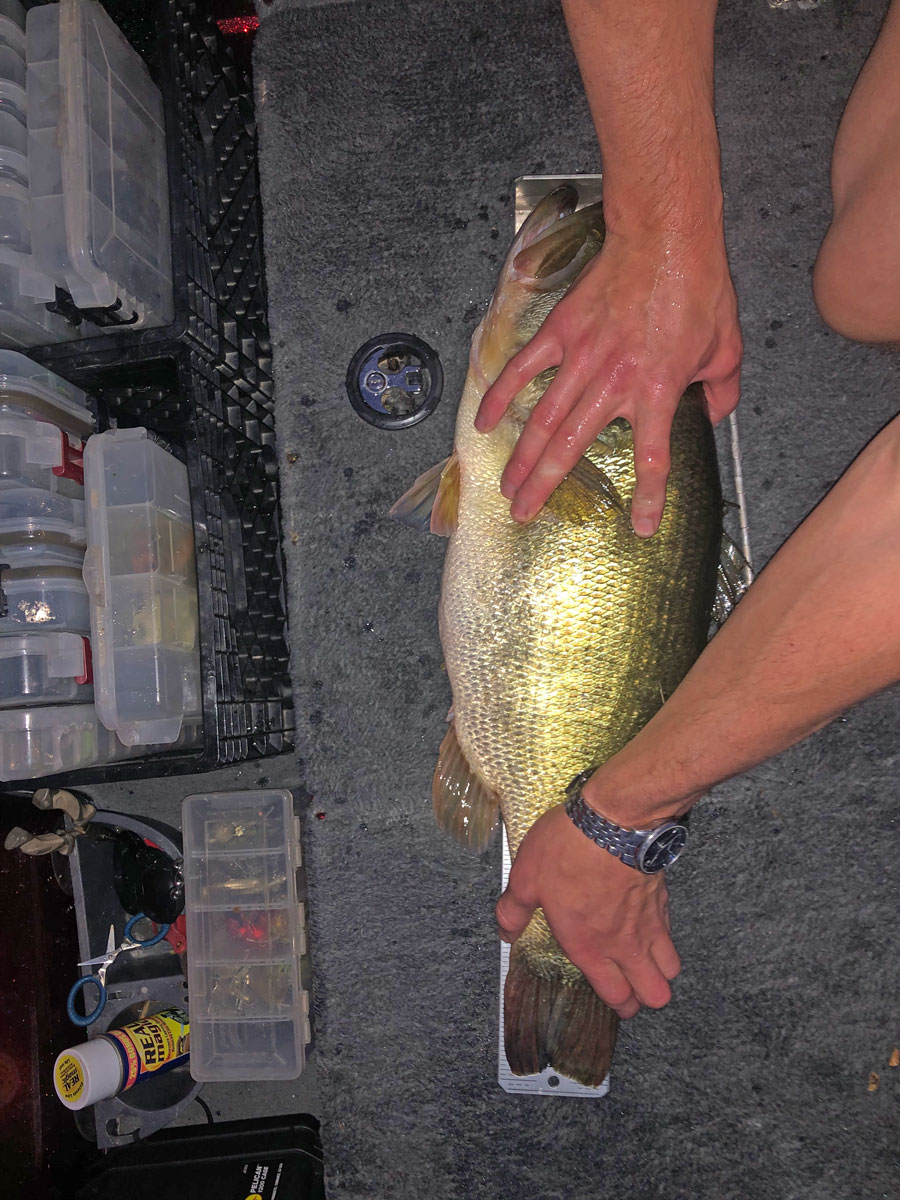 Suddenly, a giant bass exploded from the water’s surface, shaking its head violently.

“I’ve been fishing my entire life, and it was the largest bass I’ve ever seen,” Bordelon said. “I was beside myself, watching him reel this thing in like a tuna — I thought he was in sit-down gear.”

The drag on St. Germain’s reel was set for the 15-pound line he was using, and he struggled to gain on the big fish. He put his thumb on the spool to slow the line ripping from his reel. Both anglers worried that they would not be able to get the fish to the boat.

A last-ditch effort to win the day

Bordelon grabbed the net, and yelled: “Keep the rod tip down. I’m going to go as fast as I can towards this thing with the boat and try to scoop him up.”

“We basically ran the fish over with the boat,” Bordelon said, laughing.

But the last-ditch move worked. He was able to scoop the big bass into their craft.

“Once we put our hands on the fish, all of the emotions came out,” Bordelon said. “I had such an adrenaline rush; we had to sit down; I was shaking.”

A fish and a birthday present

“It was the most beautiful fish I’ve ever seen,” St. Germain said. “I’ve never seen a bass that big in my life. I mostly fish inshore for redfish and trout; I fish almost every single day after work. But man, when I tell you … a bull red ain’t nothing compared to pulling in a nearly 10-pound bass.” 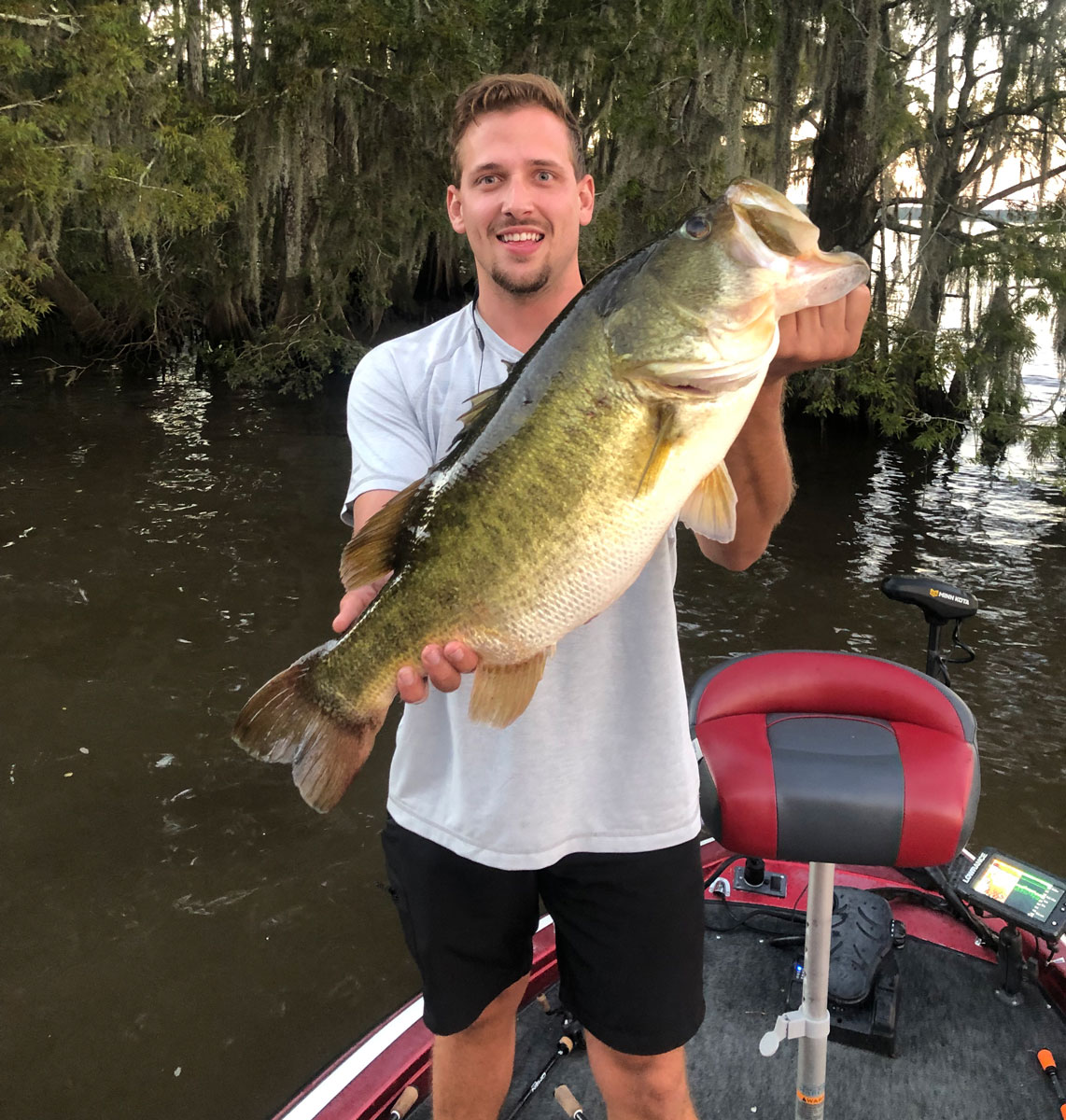 Later, Bordelon contacted the Louisiana Department of Wildlife and Fisheries.

“A biologist told me that it was the second-largest bass recorded in their notes on Lake Dauterive,” Bordelon said. “The biologist said that previously someone had caught a 10-pound, 2-ounce bass in the area.”

I’d be really lucky to see something like that again — something close to that,” St. Germain said. “It was definitely a nice birthday present — for sure.”