When Ricky Sharbeno, a 37-year-old oilfield worker from Anacoco, woke up on the morning of Sept. 22, his first thoughts were of bucks, not bass. He planned to go deer-hunting that morning with a friend, Cody Knippers.

As Sharbeno crawled out from under the covers, the 12.50-pound monster largemouth bass he would catch later in the day was nowhere in his mind.

But the thoughts of a hot, sticky day in the woods with insects pestering them constantly, Sharbeno and Knippers eventually decided that it was just too hot to go hunting, so they chose to go fishing at Vernon Lake on a lark.

Two hours without a bite

At 8:10 a.m., Sharbeno and his friend had fished for two hours without luck. The sky was overcast and dull; they began to think the day was a failure, and they were prepared to head home.

But when they came to a point that extended into the lake, it looked too good to pass up. An old homeplace occupied the point. Concrete beams were submerged in the water — probably the remnants of an old pier  — and crushed concrete lay strewn along the shore. In about 11 feet of water, a bush stood on its own, inviting Sharbeno to cast. He did, then waited for his lure to sink.

“I was fishing with a green pumpkin magic Baby Brush Hog, Carolina-rigged with a 2-foot leader,” Sharbeno said.

Caught on a bush

When his lure reached the bottom, he gave it a tug.

“When I pulled that first time, my line moved, so I set the hook,” Sharbeno said. “But I didn’t feel (a fish), so I thought I was hung on that bush somewhere.”

Assuming he’d made a mistake, Sharbeno continued to reel in his line. He thought he was cranking some of the bush to the surface, not a fish — certainly not a fish.

“When I got about halfway to the boat, I felt the first couple of little jerks,” Sharbeno said. “So then, I thought that I was hung on a limb and had a fish on, because that had happened to me before on the lake.”

A beast on his line

“When it finally came to the water’s surface, my heart started racing,” Sharbeno said. “She fought a little when she came to the top and swam back down, but I mean, it was an adrenaline rush from there.”

The tension cranked up a notch when Sharbeno and Knippers realized that they didn’t have a net.

“We’re going to lose it!” Sharbeno said at the time. “I didn’t know if I had her hooked well, because nothing had gone as planned. There had never been a bite, so I was worried about it. She never put up a fight. She never tried to come up and out of the water or anything like that.”

Each time Sharbeno brought the huge bass to the surface, she dove again.

“I actually had (Knippers) lip her,” Sharbeno said. “I didn’t want to take the risk of getting too much slack in the line and losing her.

“It took about three attempts before she stayed (on the surface) long enough for him to get a hand on her,” he said, “but we finally got her in the boat. I probably had the shakes for 10 minutes after we got her in.” 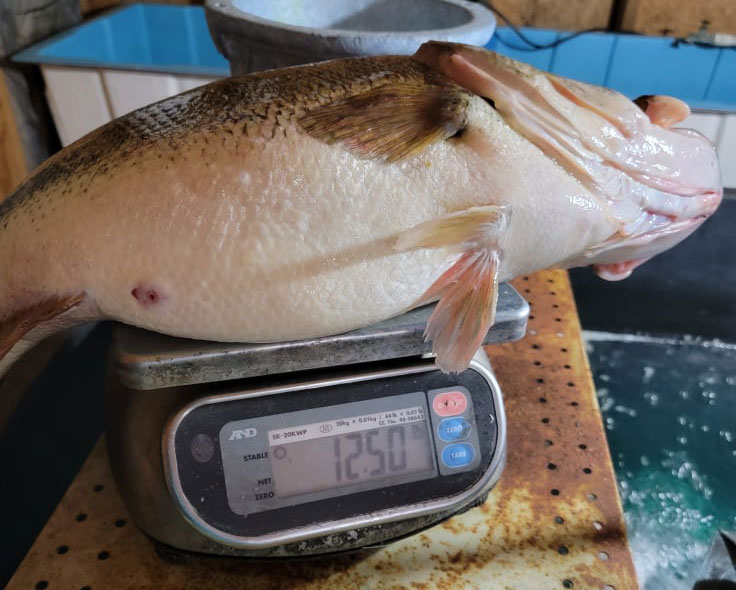 It took the men an hour to find a store with certified scales.

“The women in the store thought I was coming in to weigh something small,” Sharbeno said. “But when we got there, they came inside and took pictures of the fish.

“LDWF doesn’t keep official lake records anymore, but a game warden from Alexandria called and said that an 11.8-pound bass was the largest they had on record,” Sharbeno said. “He said if anything bigger than our 12.50-pound bass had been caught in the lake, it wasn’t reported.”

After weighing and measuring the huge bass, Sharbeno released it back into Vernon Lake.