A drawdown for the second-straight year has biologist Mitch McGee of LDWF very excited about the waterfowl hunting prospects this season at legendary Wham Brake on Russell Sage WMA near Monroe.

He said hundreds of duck hunters know the 3,000-acre impoundment holds a lot of ducks each season, if the ducks are down.

McGee said the drawdown will have a great impact in the upcoming duck hunting season on the partially “natural” impoundment less than 45 minutes from Monroe. Wham Brake, acquired by LDWF in 2013, is levied most of the way around and eventually drains into Bayou Lafourche.

“I’m excited this year on Wham Brake,” he said. “We’re initiating a drawdown on that impoundment, taking the water out to get good soil to germinate and grow plant life.”

He has said the key is to stimulate most-soil plants to come up; it takes 90 to 100 days to make a seed.

“We’ll start putting water on it early to mid-November, start putting boards in and stagger that through November,” he said. “We had a good drawdown last year, but the high water really hurt.” he added, noting the duck harvest was excellent despite the high water.

“Providing an abundant food source will, hopefully, attract waterfowl to the WMAs throughout the season despite high hunting pressure,” he said.

Based on past experiences, McGee said duck hunters often shoot more ducks from the mid-morning hours and later, after the crowd thins out.

Typically, the special teal season in September offers plenty of successful duck-hunting opportunities. Veteran hunters have said over the years that birds normally can be found in potholes in the grass and coffee beans along the shoreline on the north end when the water’s up, but when it’s low, the success rate is often better in the more-open areas of Wham Brake. 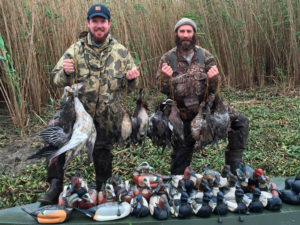 Wham Brake benefitted greatly from an enhancement project that was completed in June 2017.

Otherwise, back-to-back years of flooding in February and into the growing season may not bode well for many greentree reservoirs on the region’s other WMAs, McGee reported.

It is an area where habitat conditions were improved last year, the season reflected the improvement with the harvest of many deer, including some big bucks.

“Timber harvests last year should improve habitat in coming years for deer hunters,” McGee said. “It’s just got a good population of deer: fair numbers and quality deer. They kill some good bucks up there every year, some good bucks in the 140- to 150-pound range.”

An either-sex managed hunt this season on the nearly 7,000-acre Bayou Macon WMA probably will appeal to deer hunters who want to hunt deer before the Thanksgiving hunt Nov. 23-24.

“Somebody looking for an area before the holiday, that’s a good area to try out,” he said.

Squirrel hunters have got to try Big Lake WMA some time this season.

Some of Big Lake’s 19,231 acres that offer prime squirrel hunting include areas around Hog Lake, one of the natural areas where timber isn’t harvested and full of old stands of trees; around Buckshot Trail and off Roaring Bayou, he said.

Other top squirrel-hunting harvests come from Boeuf WMA and Russell Sage WMA, where there are acres and acres of mature bottomland hardwood forest with quality squirrel habitat. Acorns, pecans and some soft-mast species are the major food sources in the fall and winter, and all three have an abundance of mast-producing trees.

Last year’s mast crop was favorable across the region, and this fall appears to be setting up for a good red oak crop because last year’s mast survey showed numerous young red oak acorns being formed.

Lactation rates on areas across the region have been stable for the past five years, typically averaging 65% to 85% for 21/2- to 31/2-year-old does. Also, body weights for bucks and does have remained stable since 2015.

Big Lake WMA, Boeuf WMA and Russell Sage WMA all have large amounts of mature bottomland hardwood forest that serves quality squirrel habitat. Each has an abundance of mast-producing trees, the major food sources in fall and winter. The mast crop was above average last year, which should lead to above average squirrel hunting.

Boeuf WMA and Russell Sage WMA provide vast acreage for duck hunters in areas managed specifically for waterfowl. Both have received extensive flooding this spring, and once the water levels start to recede, management will start the dewatering process on the waterfowl impoundments, where food will be readily available.

Most WMAs experienced extensive flooding this spring, and some areas have been inundated for several months. The flooding could negatively affect habitat conditions, including browse availability, turkey nesting success, etc.

Back-to-back years of flood events during February and the growing season may not bode well for many of the greentree reservoirs in the region. GTRs provide critical habitat for overwintering and resident waterfowl species. Research shows a static flooding regime results in low forest density and a drastic decrease in red oaks preferred on GTRs.

Rylee LeBleu, 11, did not get to spend any time in the woods last season due to her mother being on chemo for breast cancer. […]

In this Outside the Levees video, Jared Serigné takes to the woods to go squirrel hunting on public land in Mississippi. […]