A funny thing has happened to crawfish: They have crept stealth-like into the national seafood consciousness without anybody really noticing it.

Once confined solely to South Louisiana, crawfish consumption had oozed into Southeast Texas, coastal Mississippi and Central Louisiana as far as Alexandria three decades ago.

The national Cajun craze that swept the country on Paul Prudhomme’s coattails in the early to mid-1980s was predicted to put a crawfish in everyone’s pot.

The Cajun craze sputtered out in a few years, largely because of the determination of cooks elsewhere to define Cajun Cooking as cooking as they have always done— just with a lot more red pepper.

But since then, Louisiana seafood shippers have been quietly increasing their shipments of crawfish to other states. It isn’t unusual to find cooked crawfish dishes and boiled (sometimes poorly) crawfish well into Texas, throughout North Louisiana and past Arkansas into Oklahoma.

Toward the east, crawfish are sold as far as the Chesapeake Bay states of Maryland and Virginia. Farther north and farther to the west as far as Southern California, crawfish can be found in major cities with a little searching.

They have our crawfish, but they don’t have our culture. Louisiana still has a corner on two things crawfish — cookbooks and taste debates.

Our cookbook, The Louisiana Seafood Bible: Crawfish, is currently the only book in print devoted solely to crawfish cookery.

Before that The Louisiana Crawfish Cookbook by Bunny Jumonville and Joy Mounger was enormously popular.

As of now, there are no crawfish cookbooks produced anywhere else in Louisiana — shrimp, yes; oysters, yes; crabs, yes; fish, yes; but crawfish, no.

None! Ziltch! All roads still lead to Louisiana for crawfish recipes.

Here, we debate the merits of taste on a hair-splitting basis. We discriminate against imported Chinese crawfish, even though they are the same as our most-common species, the red swamp crawfish. (We also import crawfish from Spain and, of all places, Egypt.)

We butt heads over whether farm-raised crawfish or wild crawfish are better-tasting. Farm-raised aficionados will argue that crawfish from one farm taste better than those from another.

Wild crawfish lovers might be even worse. They not only debate whether Atchafalaya Basin crawfish are better than those produced from Mississippi River overflows, freshwater marshes or other swamps, but they also argue over whether crawfish are better from one part of the Basin or another.

All of them probably have a point. Crawfish from one area do taste different than those from another.

But only we in Louisiana have the luxury of debate. 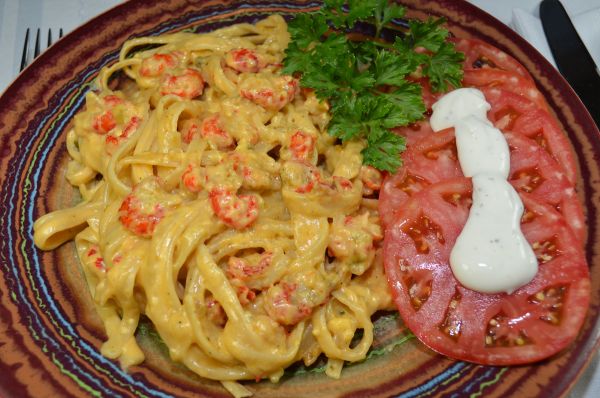 Fettuccini is an acceptable alternative spelling for fettuccine, as are fettuccini and fettuccine. By any spelling, this dish is good.

Michelle McKeon knows her fish. Before Hurricane Katrina she owned the Silent World Aquarium Store, first in Gretna, and then in Metairie. Besides that, she is a good cook.

Crawfish pastas came into vogue over 20 years ago, and fettuccini noodles were most often the pasta of choice. Not many people realize it, but every one of the 106 kinds of Italian (there are lots of Asian noodles, as well) is made of the exact same basic ingredient: semolina flour milled from durum wheat.

But when they are sauced they taste very different. Some of this has to do with differences in bite or texture between shapes. And some of it is attributable to different pastas pairing up better with one sauce than another.

For example, thick pastas can handle much heavier or more-robust sauces without being overwhelmed. Thin pastas work better with lighter sauces, like butter sauces.

This is a decidedly thick sauce, so it works well with fettucini noodles.

Be sure to cook the pasta al dente, a term that literally means “to the teeth”. It should not be hard, nor should it be soft. It should be firm, but done through — and it is best judged by biting a piece between your molars.

Boil fettuccini noodles in salted water, drain and set aside. Sauté onion, bell pepper and celery in butter until soft. Add flour and crawfish and mix. Add half & half and cheese, cooking over medium-low heat until the cheese melts. Add fettuccini to mixture, then transfer to a buttered casserole dish. Cover and bake at 350 degrees for 15 minutes. Serves 8. 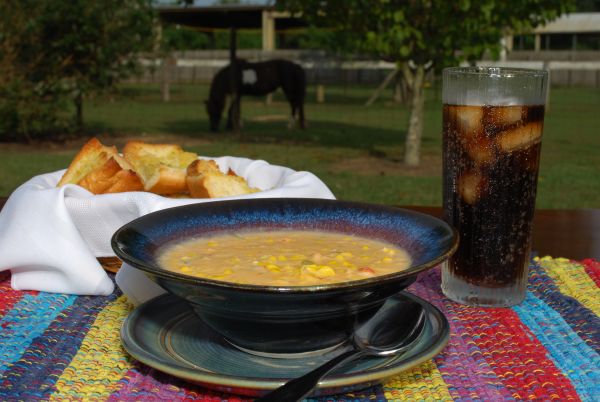 The soup most typically associated with crawfish is crawfish bisque, which is often not cooked with enough liquid to really be a soup in the classic sense. Many crawfish bisques are stew-like and served with a generous supply of rice.

Corn soup, while not often touted as a Cajun staple dish, is very common and well-regarded in Cajun communities east of the Atchafalaya Basin and in New Orleans.

The provolone cheese in this recipe is an interesting ingredient. Made from whole cow’s milk, it is not as often used in American cooking as its first cousin, mozzarella, although provolone is the cheese of choice for sandwiches made with Italian meats.

The semi-hard cheese is simply mozzarella cheese that has been formed into any shape and size, ranging from small pear-shaped packages to giant 200-pound sausage shapes, rubbed with brine and hung two to six months for aging. Most found in the U.S. have only been aged two months and have a mild flavor.

Provolone is an excellent cooking cheese and melts well. Fresh, young provolone might be soft and difficult to grate, but don’t leave it out of this recipe.

This recipe is so simple that it is ridiculous, and it tastes wonderful.

In a large pot, melt the butter over low heat. Blend the flour into the melted butter. Add onion and sauté until wilted. Add remaining ingredients and cook on medium heat for 40 minutes. Stir frequently to prevent scorching. Serves 8.