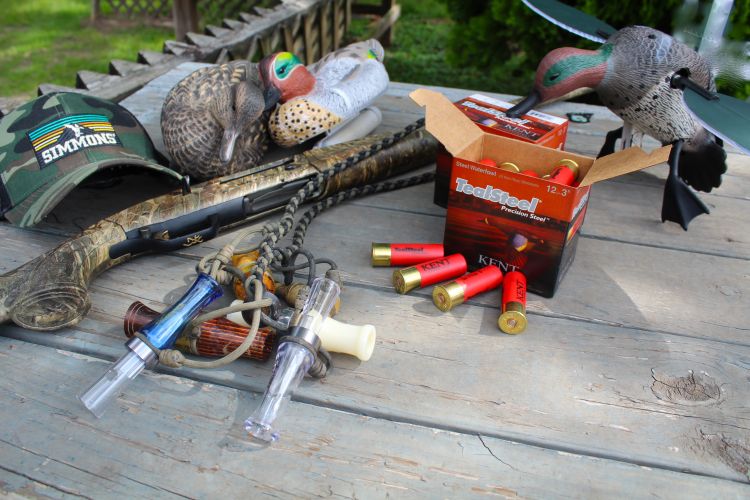 There are a dozen top-notch duck hunting guns on the market today, but when Hunter Simmons heads to the teal blind, he usually has his Browning Maxus 12-gauge over his shoulder.

“It’s my favorite gun. It’s a fit for me,” he says. “But there are loads of great guns out there. Like the Browning A5 or the Benelli Super Black Eagle 3. Everybody has to find the best one for them.”

Hunter loves the new Kent Teal Steel 3-inch shells for teal because they come in a No. 6, which only a few manufacturers still make. He also likes the Hevi-Steel from Hevi-Shot, a competitively priced shell that also comes in No. 5-6.

He has numerous calls, but his go-to calls are the Haydel blue wing teal call or the Buck Gardner teal call. He also says the Duck Commander teal whistle is a keeper.

He loves the Dakota teal decoys because they are light on the water and have excellent movement. They are a high end decoy and cost a bit more, but the sturdy paint jobs holds up for several seasons and makes them work it.

And he won’t let the batteries die in his Mojo Teal decoys. He says those are a must for his decoy spread, whether in a small body of water or a huge rice field.

And, since it’s September, you never want to go anywhere near water in Louisiana without some sort of insect repellent. And make sure you dress accordingly for the weather. It’ll let you have a more pleasant hunt.