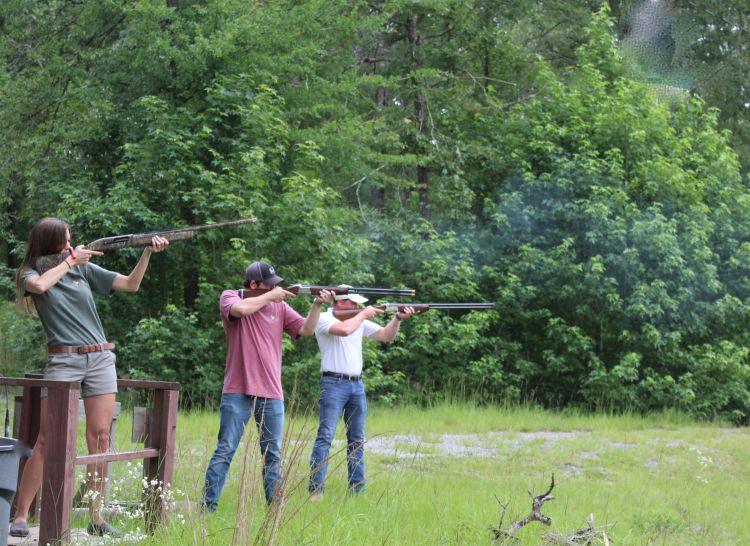 When the opening day of Louisiana’s teal hunting season arrives, you’ll probably have the blind and decoys ready early. You’ll be working your retriever, cleaning your shotgun and stocking up on supplies. Everything will be ready.

But what about you?

As they say, luck is when preparation meets opportunity. Teal aren’t exactly the easiest target to hit cold on opening morning. Although it seems like they fly at the speed of light, the average teal only flies about 30 miles per hour, but their flight pattern is like a fly avoiding the swatter. And their size makes it seem like they are going faster than they look.

Preparation for that moment includes taking time to keep your shooting skills sharp all year, or at least hone up on your shooting skills before the first flight of green or blue wings swoops over your decoy spread. The time for that would be now. And one of the best ways to do that is visit a local skeet, trap or shooting clays range. Go with some duck hunting friends. Make it fun, not work.

I was able to go along with Hunter, his sister Lindsey Simmons and Daniel Echols at Wild Wings Sporting Club and Lodge just a few weeks ago.

Simmons says it’s tough to shoot in the hotter months, but if you teal hunt you better tough it out. His recommendation is to crank up the thrower as fast as it will go, because when the teal buzz the decoys they will be going fast as they can go.

Any shooting practice is good, but shooting a round of sporting clays is more beneficial than shooting plain skeet, Hunter says.

“It just keeps you sharper. You move from station to station and the targets come out from various places at various heights and angles,” he says.

“Shooting behind teal is the main mistake that I see people make,” says Simmons. “People underestimate how fast they are and don’t stay out in front of the bird far enough. Sometimes they will also get out in front, but then not keep swinging the barrel forward. By doing that, you keep the pellets moving in the same direction as the birds. It makes a huge difference if you stop the barrel of your gun. That mistake is amplified when you are shooting teal because the target isn’t half the size of a big old mallards you’ll see later in the season.”

The second biggest mistake that he sees is because of the way that teal fly, usually in bunches of 20-30 birds, especially during the opening teal-only season.

“The teal will come in there 20 or 30 in a bunch and if you jump up and just start shooting, you probably won’t hit anything,” he says. “You have to discipline yourself to pick out one bird and aim at it. Be specific about the teal that you shoot at. I usually try to pick out one near the front of the group and if I do shoot behind, maybe I’ll get lucky and hit one of the ones behind it.”

Teal hunters need to develop a plan for who will shoot where in a big flight of teal before they get there, just to make sure everybody isn’t shooting at the same ones.

Again, that’s where practice comes in. And if you can practice with some of the folks you are hunting with, that makes it even better. On occasion, even the best shooters will get in a little slump or miss some shots they feel they should make. That’s a good time for your fellow shooters to be paying attention to what others are doing so they can offer a helping hand.

And here is another critical tip for shooting teal.

Make sure you and your hunting buddies know beyond the shadow of a doubt the difference between teal and other ducks during the special teal-only season. Shooting another kind of duck during teal season is a strict no-no and carries a hefty fine.

Teal are best identified at a distance by their smaller size and twisting, turning flight patterns and they commonly fly lower and faster than big ducks. Blue-wing teal make high pitched peeping or whistling sounds and nasal quacking sounds. Teal are typically the first to migrate, which is why there is an early season. Green wing and Cinnamon teal have the same characteristics, with slightly different coloring that matches their names.

If you haven’t been able to spend enough time in the blind to learn to identify teal for certain, there are some Youtube videos of teal hunting that can help you here as well as studying up on them or spending time in teal territory before the season watching the early arrivals.

There is one more thing you need to be working on right now — calling. Teal are very responsive to good calling and that can make the difference between a so-so hunt and a limit on the lanyard. Even though he has hunted his entire life, Hunter practices his calling regularly, once again to keep the skills sharp.

Louisiana’s 2017 teal season runs through September 30, opening on Friday and going a week longer than usual. Both should be a good thing for hunters, especially those who take preparation with them to their opportunity.

Next month: “Get Set” and “Go.” Hunter Simmons shares his best tips for actual success in the blind going after fast-flying teal.

Hunters can hike in to their hunting spot with the lightweight, super strong Alumalite CTS Pro climbing stand. […]

Seven regional biologist supervisors or biologist managers help hunters who want to choose one or more WMAs to hunt small game in 2022-23. […]