Moreland gives his answer about buck deer vs. tom turkeys

I have been richly blessed over the years to have harvested both adult buck deer and adult tom turkeys. Hunting has always meant adventure for me and the pursuit of a heavy-rack mature buck or trophy longbeard turkey enhances the degree of difficulty to the adventure. I was asked a few years ago which one is the hardest to kill?

There is probably no correct answer, but from my experience one is harder to outsmart than the other.

During January of 2021 pictures of a few longbeards and a nice group of hens got me excited. A couple of weeks prior to the 2021 spring season, I observed the group of 13 hens in the camp field with a strutting longbeard. The week before the season photos revealed only two hens but the longbeard was still around.

When the season opened I was out early listening for a gobble. But the woods remained silent for the first week. The woods remained silent during the second week, but I was still getting pictures of the tom in the camp field. During the third week, a hen answered me when I was in the turkey patch, but it came in without a tom. I was out at different times of the day. Being retired one can do that. But I never heard a gobble. I was trying all the different turkey calls I had in my bag of tricks; loud calling, soft calling, aggressive calling, everything! During the start of the last week of the season I saw the tom in the east field one afternoon and the next morning was there bright and early, with a few decoys and what I thought was quality calling. 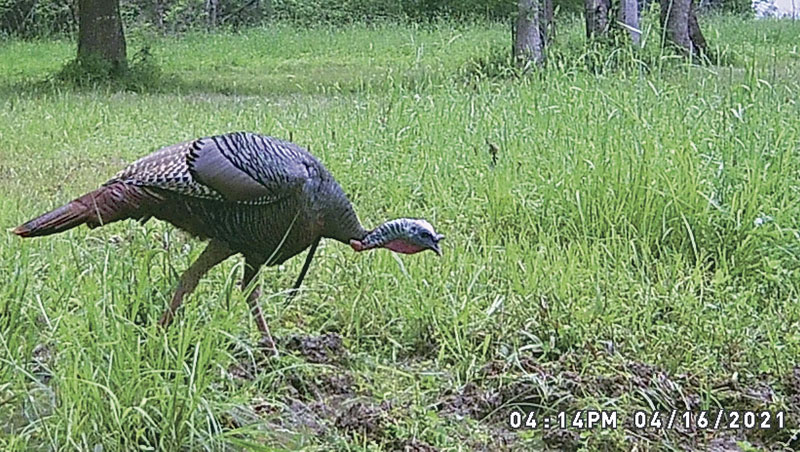 I was fooling around in the blind and looked up and there was the tom about 60 yards away looking at the set-up. It put its head down and disappeared behind an uncut lane and I began some soft calling. The head came up, still too far for a shot, and then went back down.

After 15 or so minutes I crawled out to the edge of the field and the tom was gone. I discovered it was in the camp field when I walked out.

Back in the camp field the next morning, I decided not to call at all, but just to sit and wait. At 10 a.m. a squirrel started scolding something in the field, and knowing from experience what that meant, I got the gun up and ready. The tom stepped out of a strip of tall clover and rye grass into an open lane of Mayhaw trees at 40 yards. It was his last mistake. “Silent Tom” was in the bag!

Sure, it wasn’t easy, but the end result was turkey hunter 1, longbeard 0.

During the 2018/19 deer season a really nice buck showed up on my game camera eating pears for two weeks and was never seen again. I aged the buck at 4 ½ years. I never saw any pictures of him during the 2019/20 deer season.

But prior to the 2020/21 deer season, a buck showed up that looked real similar to the “Pear Buck” and if it was that same buck, that would make it a 6 ½-year-old. It was a real mature buck. Unlike the 2018/19 season I kept getting photos of the buck. His regular appearances got my hopes high and my sights were set on bagging it.

The month of November went by and all I had for my efforts were photographs of the buck at night. I wasn’t too upset because our rut is basically in December, so there was still plenty of time. In mid-December I went out early one morning and shot a 3 ½-year-old, 6-point that was out feeding early. This buck had been on camera and was with the “Pear B” at night on several occasions. There was still hope. He had to be near.

December gave way to January, the last month of the season. We were into the final stretch. And I was still getting photos of the buck, but only at night. I just knew that my time would come at the end of the month when the rut was over and the deer would go back to feeding. That’s usually what happens, even with the biggest of the bruisers.

He wasn’t alone. I had pictures of another adult 6-point and a crooked beam 7-point traveling with the “Pear Buck.”

The last week of gun season the 6-point came out one evening with some does, but I did not yield to temptation. The next evening the six was out early and then came old crooked beam. I had aged this deer at 3 ½ years old.

The young crooked beam buck presented me with all kinds of good shots, but I was holding out. I just knew the “Pear Buck” would soon be out.

As shooting time ended I watched crooked beam and the 6-point follow the does into the woods. The “Pear Buck” and its nocturnal schedule had beaten me fair and square.

And that is why my vote is with the adult buck being the most challenging!

I have discovered that if I observe turkeys without disturbing them both prior to and during the season, I can figure out where and when to bag a tom. But when it comes to adult bucks, my best plans and strategies often never work. It probably has something to do with the nocturnal habits of whitetails. If you get a little too close, infringe on their territory and let them see you first — they only come out at night. And sometimes not at all!