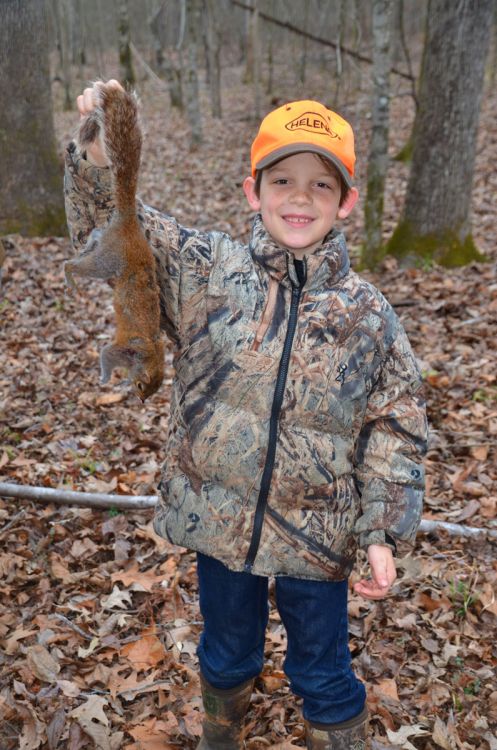 After Joe Shumaker and Terry Fletcher buckled tracking collars on their dogs, Shumaker lined up the youngsters and gave them a short safety lesson.

“Only shoot up. If a squirrel comes down the tree, don’t shoot,” he said. “It will go back up a tree.”

The pace of hunting with a squirrel dog creates an ideal learning opportunity for young hunters. Fast handling of loaded guns to make snap shots are never needed. Young hunters carry their own firearms to become accustomed to handing the weapons.

But until the hunters reach the tree where the dogs are barking treed, kids’ weapons typically remain unloaded. When they do load them, they are under the supervision of adults who make sure the guns are handled safely.

Boredom, a common affliction of young deer and duck hunters, is never a problem when hunting squirrels with dogs. The group is constantly on the move through the woods, keeping up with the ranging dogs or bee-lining to the excited barking of treed dogs.

When a treed squirrel breaks and runs, shooting can be fast and furious, with young hunters often ending up with empty shotguns and a lot of misses.

Every tree presents a tactical challenge.

Occasionally, a hidden squirrel can be spotted in a tree crotch or plastered on the side of a limb. But very often, the hunters have to shake a vine, light a smoky fire, or beat on the side of the tree to make the squirrel move.

Even the dogs tussling with each other over the right to claim a downed squirrel is amusing. All of it is great fun for kids.