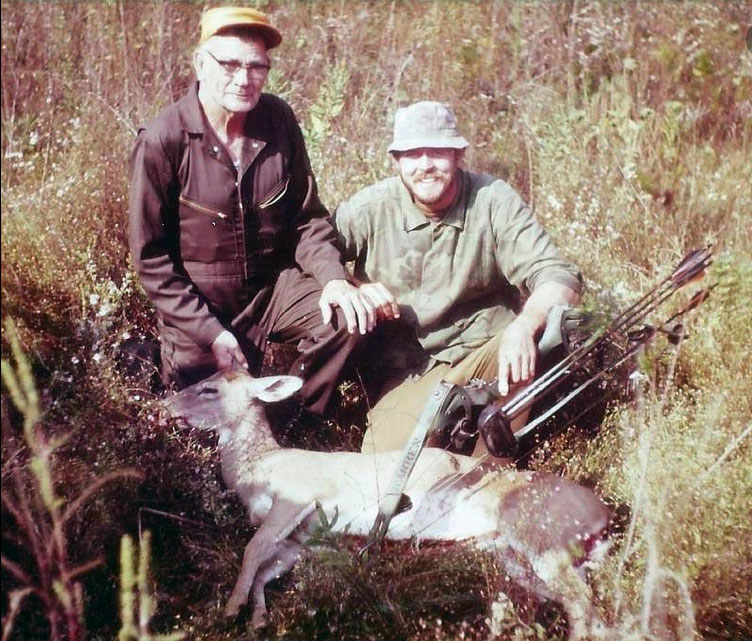 My plan for this evening hunt was to hunt a large weeded area on the edge of a willow thicket that bordered the Mississippi River. I had found a lot of sign that indicated that there was a good many deer moving through the area. The problem was, there wasn’t any trees to climb and hang my stand. I was determined to do whatever it took to hunt this area.

It took awhile, but I was able to find three willow saplings, about five inches diameter, growing really close together. Holding them together I was able to climb all three…. being extra careful where I set the gaffs of my tree climbing spurs. I was only able to reach a height of six feet and had to make several wraps around the three saplings with the chain to secure my stand. The bending saplings caused me to have to sit leaning forward. It wasn’t the most comfortable setups I’ve had, but the best I could do. I hoped that it would work.

It was 6:10 when deer started showing up. Several deer came through in a group, and I shot a doe at 20 yards. After the shot, deer scattered in every direction. I did my best to keep her in sight when she ran off. When she was gone I took a compass bearing of 240 degrees as the direction for my search. I wasn’t able to find blood so I did a grid search until it was dark.

The next method I used to find her was with my Bronco. Philip Haley rode on top of the Bronco, sitting on the rack, with a spot light looking for her, while I drove. It was like I was bush-hogging with a tractor, mashing down the high weeds. When we finally gave up for the night, we had flattened a very large area.

The next morning I walked out the pushed down area to make sure we hadn’t overlooked her. Still not finding her I decided to search different bearings. With the help of daylight and the Haley camp we found her. Her run had taken her 170 yards from the arrows impact.

When she ran off, I had mistaken a different deer for her and took a wrong compass bearing for the search. She had actually ran 300 degrees instead of the 240 degrees that we had spent three hours searching through the head high weeds. I was thankful for the Haley camp help and for finding the unspoiled doe.

*Note: Mr. Rudolph Haley was the one that found her, and is in the picture with me on that day. I find it interesting that, as I share this, I’m now actually older than he was then. I always considered him to be the definition of a “True Southern Gentleman” and a great role model. He was 75 years old when I took this picture of him with his bow-killed buck. 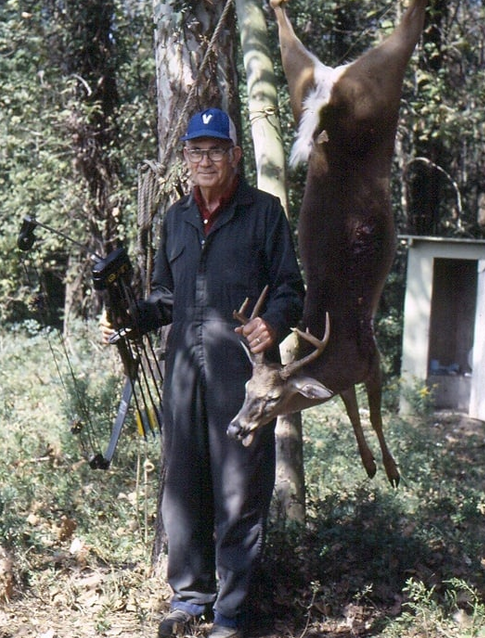