This rut prediction is based on the timing of scrape initiation for each area, which from my years of observations, always occurs during the new moon phase. Scrape initiation is that time when bucks will open up traditional scrape sites for the upcoming season. It’s probably a result of an increase of testosterone and the bucks will not check or work the scrapes again until another month, when the major rut period begins.

Deer seasons are established based upon the breeding season of deer in a particular area. The southwest parishes of the state generally have the earliest dates and therefore open early. Area 2, one of the largest deer sections in the state, has the typical breeding season like many of the Midwest and northern deer states. November is the peak month of breeding activity in this Area. Areas 4 and 9 have December as the major month and Areas 1, 5 and 6 have a late rut in January.

Based on the timing of scrape initiation, I am predicting a 2022-23 rut with the major breeding periods occurring during the early weeks of their breeding range. 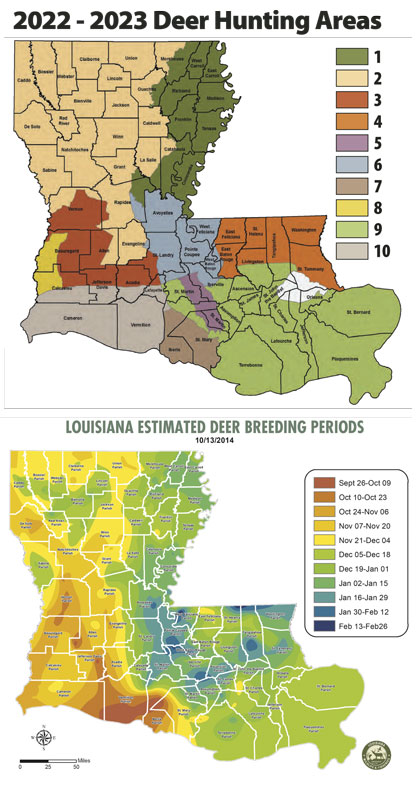 An early rut was also predicted for 2021, but based upon hunter harvests and examination of female reproductive tracts, the rut was about a month later than predicted. Now generally these days when things go astray, folks jump to blame climate change, but in this case I don’t think that is the culprit. What did happen was a major hurricane. Hurricane Ida came into the state and left a path of destruction as it moved northward from the coast into the Florida Parishes.

I distinctly remember sitting in my chair that night in the Clinton area watching the storm when the power went out. I tried to contact several friends in north Louisiana to see what they could tell me about the path of the storm and then realized there was no phone service. I knew that wasn’t good. While we had damage on our property, we were spared the destruction that so many received.

After the storm, the weather during September and October was very hot and dry. What really got my attention was the out-of-season flowering of numerous fruit tree species. Our big Red Mulberry tree leafed out and flowered again and actually produced a crop of mulberries. Pears and mayhaws also flowered along with other species of trees that leafed out again.

The storm, with its stressful weather that followed, had an effect on the landscape. I believe it had an impact on the animal ecology and was responsible for a later than anticipated rut. Of course, that’s just me and what I observed.

I hunted the early season in Area 2 in Union and Bossier Parishes and experienced poor deer movement and no success. My prediction for the major rut period in Area 2 last year was mid-October. But based upon breeding dates of does from Bossier Parish that I looked at in early January, it showed that breeding began on Nov. 15, a month later than predicted. Most of my deer hunting is done in Area 4 where I live. In 2021, I had predicted the major breeding to begin in late November. The limited data I was able to collect showed it to be later. I examined a 1 ½-year-old doe that bred on Dec. 8, an older adult doe that was bred on Dec. 20, and a 10-month-old doe that cycled and was bred on Feb. 6.

Late December was predicted for the start of Area 6 breeding and based on data from 10 does that I examined, major breeding began in mid to late January. While deer movement, particularly buck movement, appeared slow, the 2021-22 harvest report showed an increase in the deer harvest when compared to the 2020-21 deer season. While I saw plenty of deer, my sightings of adult bucks was down. It seems they were always a step ahead of me!

Therefore, keep in mind that the rut prediction is just that, a prediction.

Weather conditions and changes in the landscape or habitat will affect deer movement and activity. During the major breeding period, most of the does in the population will be bred, at least 70 to 80 percent of them. During the minor breeding period the remainder of the does should be bred. Some of these deer are just young, like a road kill doe that I examined back in May.

This doe was bred as a fawn on Feb. 6; apparently it became sexually active at that time and had its first estrus cycle. Over the years, I have examined 1 ½-year-old harvested does that had fawned based on evidence of lactation, but this was the first fawn that I ever examined with a fetus in the uterus. This is an indicator of a healthy deer herd.

Both the Major Rut and Minor Rut periods are divided into a time of scraping and a time of breeding. Both periods are approximately two weeks long, although the scraping period could only last 5-10 days. Once does begin visiting scrapes and leaving their scent, the bucks will leave the scrapes and start following them. The chase is on followed by a period we often call lockdown, when the breeding takes place and deer seem to disappear from the landscape.

Now, on with the prediction.

Southwest Louisiana is the early rut region of the state and the seasons open early to allow hunters to hunt during the rut. All hunters should carefully read the regulations and season literature to know the exact location, dates and limits for each area. There are several public land areas in this region and these generally have different season dates and hunting schedules. 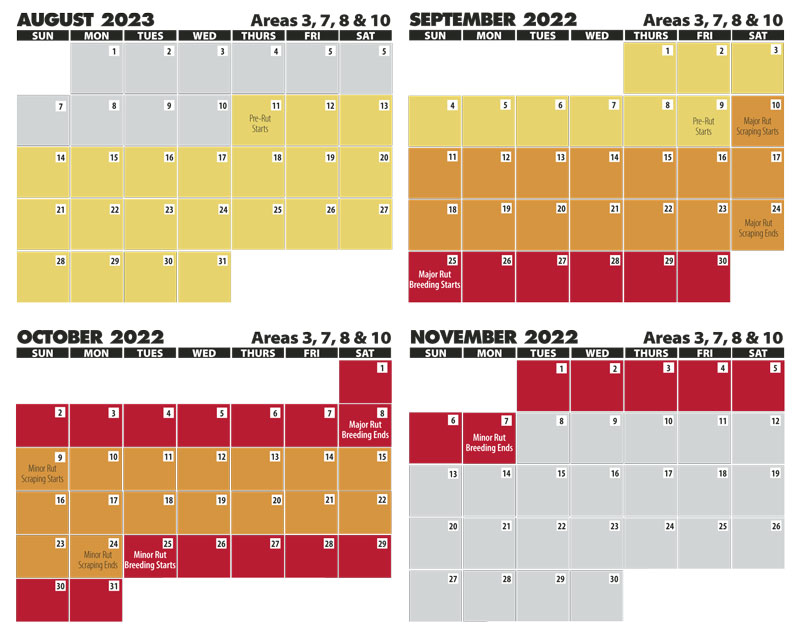 West Bay WMA is always a good area to hunt and last year the early October hunt produced a deer kill per every seven hunter efforts, which is good. The October hunt on Peason Ridge had a deer killed per every 4.5 hunter efforts. This region of the state is best known for waterfowl hunting, but the deer population in these parishes is good as well. They do not produce the true trophy bucks, but will produce a lot of quality adult bucks. The breeding range in these areas is September thru December, but don’t wait until November to start hunting or you may miss out on the best deer movement. 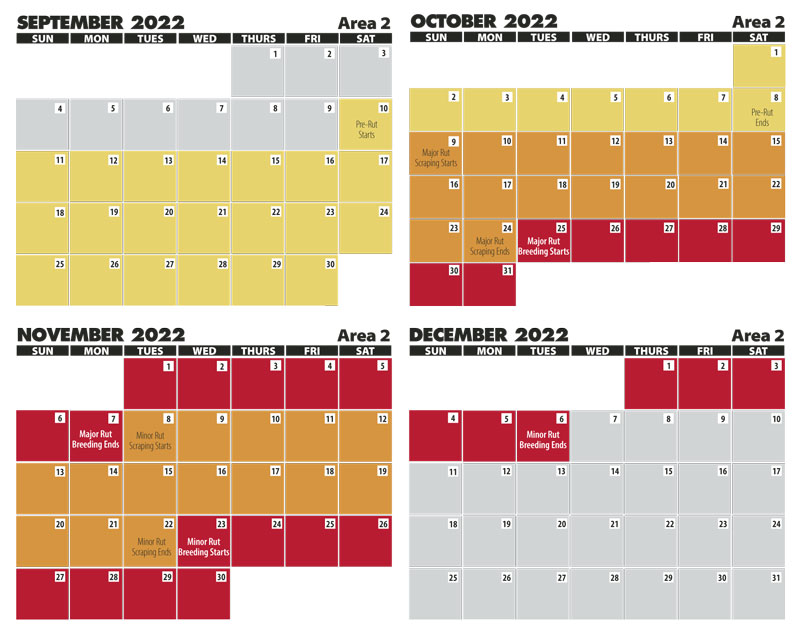 Northwest and Central Louisiana is known as Area 2 and many of these parishes have some of the state’s highest deer kills. Bienville, Union, Claiborne, Natchitoches, Winn, Jackson, Rapides and Webster are in the top 10 deer kill parishes. Bossier, Sabine, LaSalle and Grant are in the top 20. It is evident that there are good deer populations in this region and the major rut occurs in November, so hunting is generally excellent. Many hunters take time off from work on Thanksgiving week, hoping to catch it at its peak over the holidays. The breeding range is October through January, but generally by the end of December, bucks are beginning to drop their antlers. Bodcau and Loggy Bayou WMAs are two great areas to hunt. 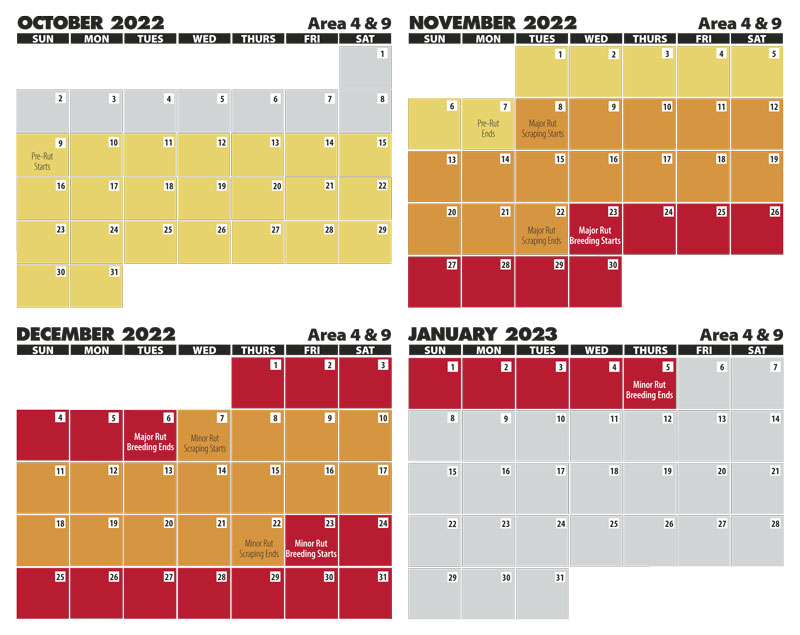 The breeding range for Areas 4 and 9 is November through February. Generally December is the peak month of breeding activity and that is the prediction for this year. For whatever reason, Area 4 has been anointed with a three-deer limit, so hunters must be aware of this. This region of the state has been hit hard by hurricanes and for some reason the biologists at LDWF believe deer numbers are down. However, I would suggest that they need to take a closer look at these parishes and re-evaluate the situation. Deer numbers are not down in East Feliciana and some of the surrounding parishes. Public WMAs are limited in this region and an examination of the WMA harvest data won’t get hunters too excited!

Perhaps providing more hunter opportunity on some of these areas might attract more attention. It appears that the overall trend on the state’s management areas is a decline in hunter participation.

Areas 1, 5 and 6 are the trophy buck areas of the state and this is due to a combination of soil, agriculture and bottomland hardwoods.

It also is the area of late breeding and it is not uncommon for hunters to find active scrapes in the woods during February and March in many of these parishes. Unfortunately, one case of CWD has been discovered in a small portion of Area 1, which has resulted in LDWF taking action to prevent its spread. The area of precaution for CWD includes portions of Tensas, Madison and Franklin parishes and hunters should know the detailed rules and regulations for hunting in this area. The primary focus of LDWF is to prevent the spread of CWD into other regions of the state. The western mountain states have been dealing with it since 1967, and it is a problem we do not need in Louisiana. If you look at the map of the CWD outbreak in the U.S., what began as a problem in one deer pen in Colorado, has become a national problem.

I attended a recent legislative hearing regarding the CWD ban in Tensas, Madison and Franklin parishes. All of the legislators wanted to know when would the ban end, how long will this last? Well, the basic answer is it does not end, once you get it, you have it, and it does not go away. Look at the CWD map; the problem just expands and gets worse. Consequently efforts to contain the disease must be made.

This is an agriculture region with bottomland hardwood and batture land, the river’s actual active floodplain, and there is no need to bait, in my opinion. Hunters can plant and hunt over food plots. However, if the disease expands from here into the piney woods, hunters will be facing troubles because of the popularity of baiting.

Many hunters around the state will use deer scents and urine when hunting and the state has enacted specific rules and regulations to address this. Hunters should be aware of this when purchasing these natural deer lures for hunting and use only approved products. It is up to us to do our part and help prevent this serious disease from expanding further into the state.

Hopefully my predictions will provide you with some insight as to the best time to hunt. Some will say that any time someone can hunt is a good time, but I can say with confidence that there are times when you are just wasting your time. The deer are just not going to move! Hunt hard and be safe; share your success with others and help teach the next generation of hunters how to hunt the right way.

Jerry Antley is an icon in the world of turkey hunting. His company, Cedar Hill Game Calls, invented the Little Scratch Box. […]