When your field points shoot straight, but your broadheads won’t group, examine your bow’s setup

Even though it was more than 30 years ago, I still remember the first arrow I ever shot at a deer like it was yesterday.

Deer were scarce where I hunted, and my mouth hung open as I watched my arrow shave the white hair from her belly at only 15 yards away. Other than her new haircut, that doe was no worse for the experience, but I was devastated and confused, having just blown a golden opportunity.

My mistake was not shooting my broadheads before hunting. Had I done so, it would have revealed that they were flying poorly and hitting the target 12 to 18 inches low at 20 yards. I learned a hard lesson that day, which is that fixed-blade broadheads always tell the truth, quickly revealing any flaws in the setup of your bow. I vowed to never let it happen again, and it instilled a desire to settle for nothing less than perfect arrow flight.

Fast forward to a recent Tuesday, just after 8 a.m. I had already been at work for several hours, tuning customers’ bows, when I received a text message from an unknown phone number asking if I would be at the shop that morning. Since I’m famous for losing/destroying cell phones, I figured it was someone I knew who was no longer programmed in my contacts, so I answered the text.

When the customer arrived just as we opened, I realized I had never met him. He explained that he got my number from a mutual acquaintance, and he had just driven 3 hours seeking my help with a bow-tuning issue. He took a chance that I would be at work, texting me at the halfway point and planning to turn around if I wasn’t going to be available.

You might wonder what would make someone so desperate. He had drawn a coveted elk tag in a unit of Wyoming after a 12-year wait. Once he drew the tag, he left nothing to chance; he purchased a new, flagship bow from an archery shop in his hometown, and it shot awesome — with field tips. But when he switched to fixed-blade broadheads, his arrows wouldn’t even group at 20 yards and were flying spastically. He returned to the shop where he purchased the bow, but the answer there was “It left here paper-tuned.” 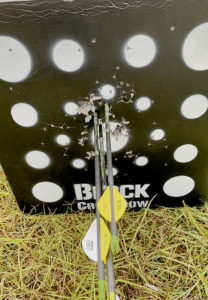 Although I was way behind and already had a full schedule, since he was desperate and had driven 3 hours, I agreed to help. I adjusted his bow back to specs, resetting the wheel timing and arrow rest to the proper alignment and paper tuning it, but his broadheads still flew wildly. After some thought, I decided his arrows were improperly spined and slightly too stiff. He told me that he had called the manufacturer, and they told him which arrow to shoot, which, according to their charts, was correct. But as I said earlier, broadheads will ultimately tell the truth, often hurting your feelings in the process, and this case was no exception.

I cut him six new arrows, and they immediately solved the problem, with tight groupings of both field points and broadheads to the same point of impact. After some quick sight adjustments, he left satisfied and headed home to shoot at longer ranges. I received a text from him several days later; he was shooting tight groups all the way out to 60 yards.

Although it inspired this month’s topic, his story is by no means unique. Almost daily this time of year, I have a customer come in distraught because their broadheads do not shoot like their field tips. Although they may weigh the same amount, leading to identical ballistics, the fixed-blade broadhead differs a great deal aerodynamically, because its exposed blades acting as a planing surface, magnifying any arrow flight deviations.

Poor broadhead flight is often a symptom of a larger problem in the setup of your bow, your form, or both. In a pinch, mechanical broadheads can be a Band-Aid on a bullet wound, but given time, it is always best to fix the underlying issues with your setup.

Other than the obvious problems of improper center shot, nock height, wheel timing and rest timing, arrow spine is probably the No. 1 gremlin when it comes to achieving field point-like accuracy shooting fixed-blade broadheads. Whenever I set up my personal bows, I start with the arrow first, only cutting a couple of shafts. After achieving a good paper tune, I sight the bow in with field tips. Once these are sighted in, I switch to a broadhead target and shoot a fixed-blade head. Assuming it hits close to center, I then “chase it” with a field-point arrow.

If both the broadhead and the field point tipped arrows don’t group tightly together, I go back to the drawing board, adjusting and trying different spines until they do. This is the best method I have found. If the two arrows are impacting the target close to each other — within a few inches — but not quite the same, you can make small adjustments by moving your bow’s nocking point or center shot slightly towards the broadhead-tipped arrow’s point of impact, as compared to the field point arrow. Make sure this doesn’t cause the arrow to be drastically out of level or center shot, however, as these can lead to other issues.

Once you have your bow shooting fixed-blade broadheads accurately, then and only then are you truly ready to hunt. A bow that will do this will be more forgiving and shoot any tip you choose to point of impact.  Although this often requires a lot of work, the results are more than worth the effort.  Archery is a mental game, first and foremost, and knowing that your broadheads will shoot exactly where you point them is key to confidently taking a shot at a trophy animal.

The Louisiana Department of Wildlife and Fisheries has added another CWD drop-off location in the Tensas River National Wildlife Refuge. […]