The peak of whitetail breeding may be earlier than usual this fall due to weather conditions. Don’t miss it; it’s the time all hunters need to be in the woods.

The COVID-19 pandemic has rocked the country, but hopefully, an early rut will give deer hunters a much-needed time of recreation in the Bayou State this year. 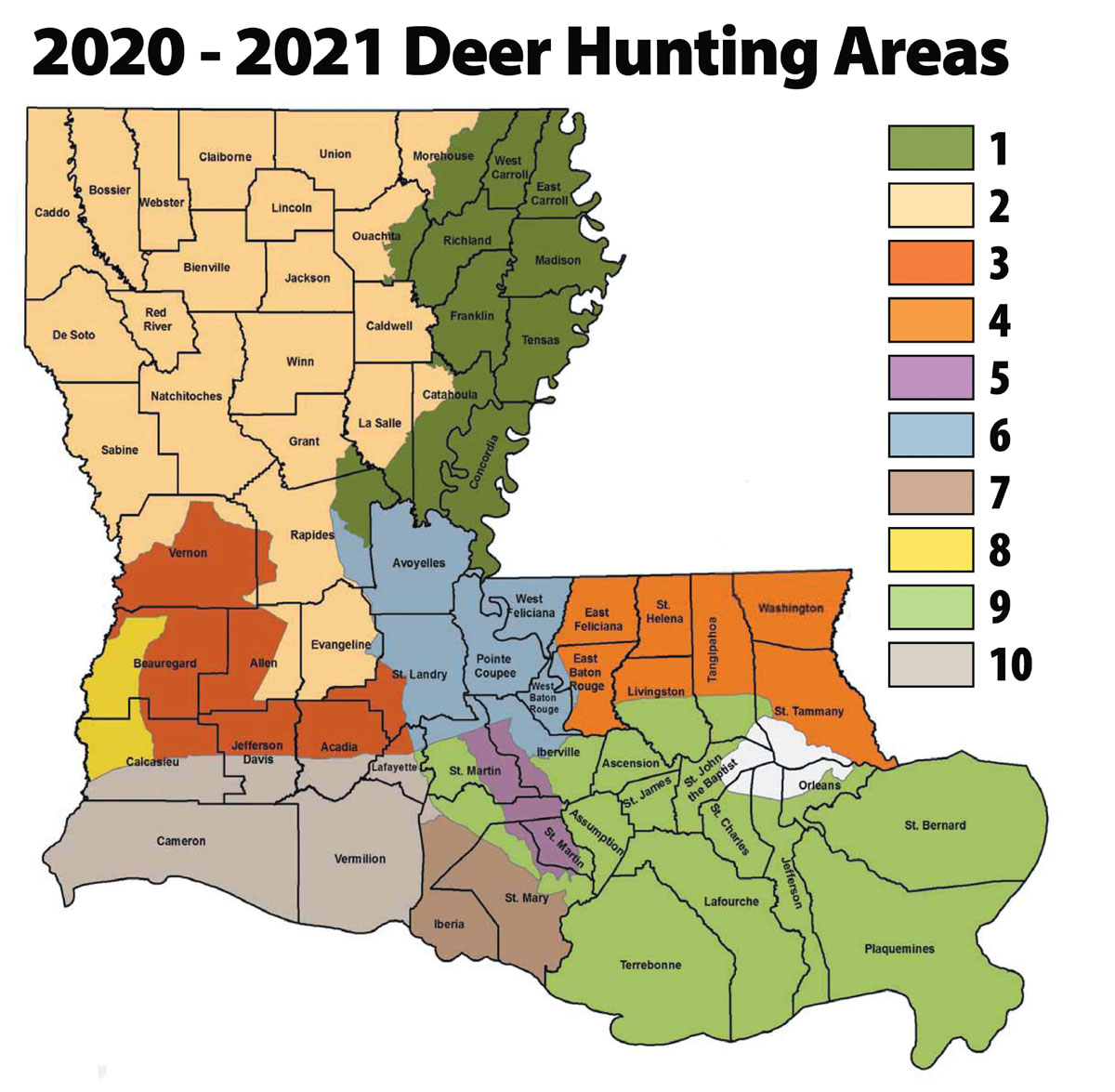 Breeding dates for white-tailed deer are established based upon embryo and fetal measurements. This management work started in the 1960s, and during my tour with the Louisiana Department of Wildlife and Fisheries, we greatly expanded our understanding of breeding dates across the state. LDWF continues to conduct periodic herd-health collections and obtain additional information. The LDWF website has these dates and a breeding map for the state (www.wlf.louisiana.gov/page/deer-breeding-periods). A breeding range is established for various areas using the earliest and latest known dates. This range may include three or four months. The average peak breeding period, generally two weeks, is given, based on many years of data collection. While certainly this peak is always a good time to hunt, the fact is, breeding can shift forward or backward every year by a week or two. If the rut comes early, hunters who wait until the average peak may miss out on some good opportunities that might occur earlier in the season. This rut prediction presents the expected breeding time for 2020; it appears the rut will be earlier than last year.

Last season, I hunted Nov. 11-12 with a good friend on his lease in Bossier Parish (Area 2). I killed a 3-year-old, 8-point buck the morning of Nov. 12, the second day for the predicted time for the first breeding period for that area. The next day, my friend killed a 3-year-old 6-pointer.

The bucks were on the move, and the rut was on. The club killed almost half its bucks during the first two weeks of the season, with the remainder being killed during this first breeding peak. We made an effort to shoot does on the club on Dec. 18-19, and examination of reproductive tracts revealed seven of nine does had been bred in November, a key month in Area 2.

I also hunt in Area 4 and Area 6 and on Pearl River WMA. Basically, while I saw and killed a couple of deer, rutting activity was almost non-exsistent. Warm weather had the grass growing and seeding out in January and probably impacted the buck harvest in Areas 1 and 6. This generally will equate to a carry-over of adult bucks, so my hopes are high for a productive 2020 season.

Breaking it down by area 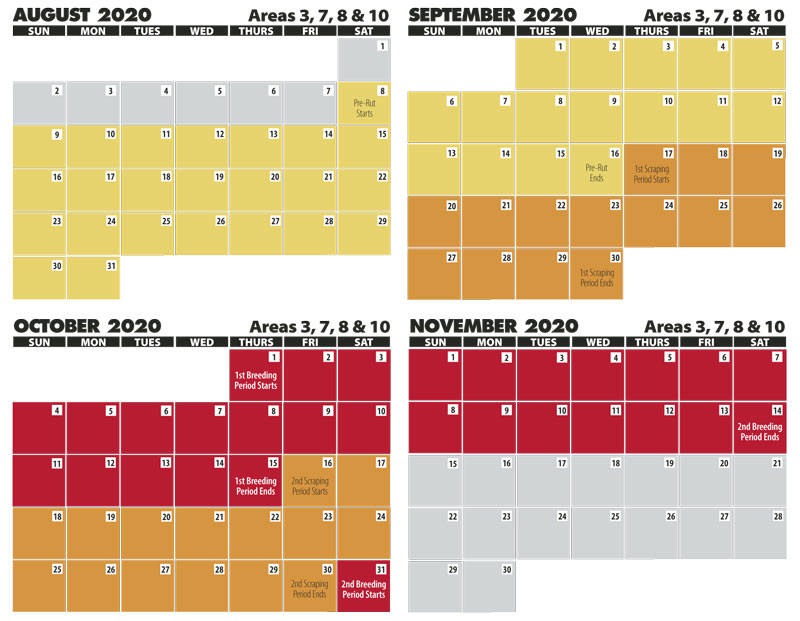 Southwest Louisiana, Areas 3, 7, 8 and 10, is the region where the rut is earliest. Archery season opens in September, and gun hunting begins in October.

This is not a land of big bucks, but a 130-class deer is possible. West Bay WMA and Fort Polk WMA are the primary public deer hunting areas. There are some federal refuges that offer limited hunting opportunities. While the weather is often warm, the rut is on, and it’s time to deer hunt. Hunters in Area 10 need to be aware that the season limit is three and not six, as in most of Louisiana. 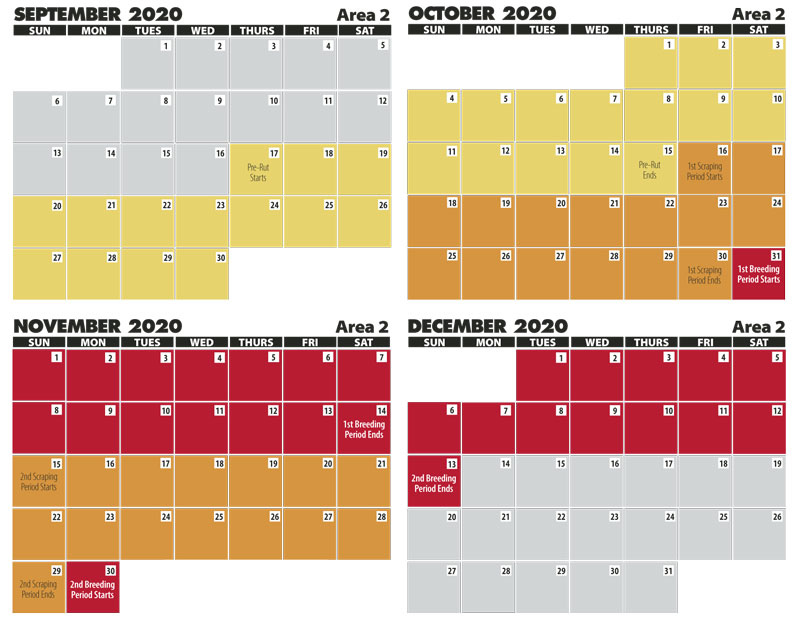 Northwest and central Louisiana make up Area 2. It covers a large portion of the state, and November is the key month to be hunting. However, with an early rut being predicted, the first primitive season and the opening week of gun season should prove to be productive for hunters. The landscape is dominated by pine timber, which does not grow trophy class bucks, but there are hardwood drains throughout Area 2 along with the Red River agricultural lands that produce trophies. There are within this deer area pockets of deer that, due to their genetic make-up, breed later than what one normally sees in Area 2. Check out the LDWF website to find these. 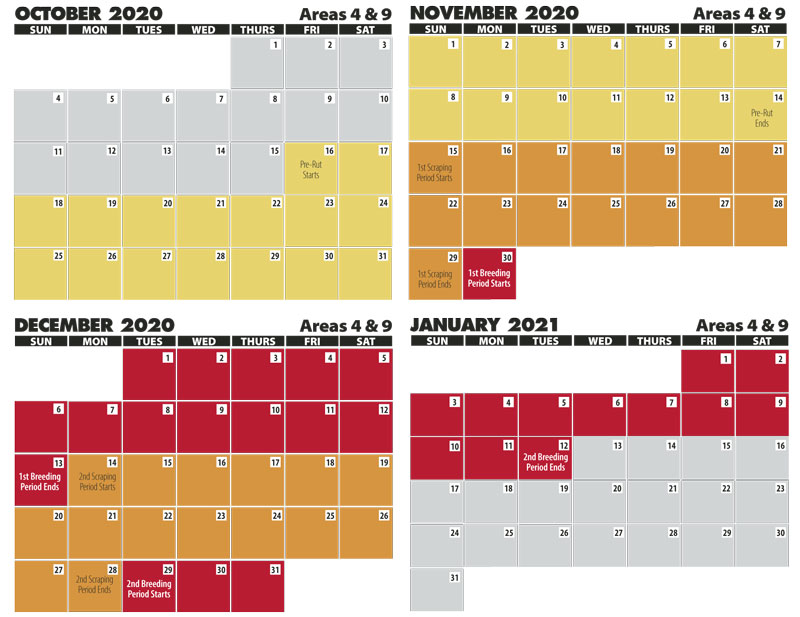 Area 4 includes southeast Louisiana, north of Lake Pontchartrain, and is well known as the Florida Parishes. While Area 9 includes some portions north of Lake Pontchartrain as well as those lands south of the lake. Area 4 is predominately piney woods habitat, while Area 9 includes marsh, swamp and hardwood forests along the Mississippi River. Both areas produce quality deer but are generally not producers of high-end trophy bucks. Habitat changes and suburban sprawl have taken its toll on the deer landscape. Because of this both areas have a 3-deer limit rather than the statewide limit of six.

Early to mid-December is the average peak breeding period, but hunters may see activity in late November this year. I remember a few years ago during the early primitive season, there were several fresh scrapes in an area on our property, and on opening day, I killed a nice, 2-year-old, adult buck. 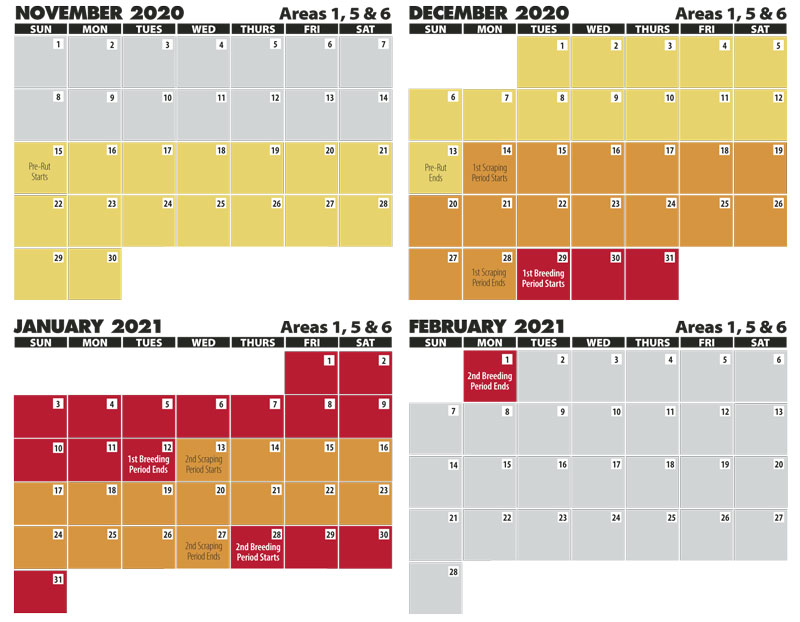 Areas 1 and 6 include bottomland hardwood and swamp hardwood forests with agricultural lands along the Mississippi River. This is the land of the giant trophy bucks. Area 5 includes the lower Atchafalaya River Basin and is swamp/hardwood habitat with some agricultural lands. In recent years, this area has been hammered with heavy flooding. The rut in these areas generally occurs in January and February, and it is not uncommon for hunters to continue to see rutting activity in March — and even bucks with antlers in early April.

Hunters need to be patient and wait for the late season and not burn themselves out in November and early December. Does in these areas do not generally wean their fawns until after November, due to the late fawning.

So there it is, my best estimate of the 2020 rut; hunt the cold fronts when deer activity is generally high; hunt the cold fronts during the rut when deer are out and moving. The rut is the time to be offensive-minded and make use of deer calls, rattling and scents. Be aware of the scent regulations that are in place and adhere to them. Above all, be safe and report your kills.

This research along with a fetal aging scale has made it easy for a landowner or club to gather beneficial information regarding the rut on the land they hunt.

Generally it is best to examine does that have been pregnant for at least two months. At the age of 30 days, the fetus or embryo is a small, shrimp-like body that is only 7 to 9 mm long. The fetus scale is not designed to measure an embryo or fetus this small. At 60 days old, a fetus is about 75 mm and can be easily measured on the scale. Generally, in the month of January in Area 2, a fetus is large enough to measure on the scale and, breeding dates can be established for does, which is just what I did on my friend’s place in Bossier Parish.

However, in late-rut areas, does harvested in late January are probably pregnant, but the embryos are too small to obtain a proper measurement. This just shows how late the rut is in Areas 1 and 6, and why the late season is important to the hunters in that part of the state. The fetal aging scale can be obtained from Forestry Supply in Jackson, Miss., or from Construction Safety Products in Shreveport.