Don’t avoid hunting Louisiana’s marshes for whitetails, despite the fact that other areas get more attention. These experts explain the hows and whys.

When Zach Badon created the Area 10 Deer Hunters Facebook page last year, its purpose was to share information and/or experiences about hunting this region of coastal Louisiana.

Through the page, Badon, who hails from Gueydan, wanted to showcase the local marsh deer he and others hunted in southwest Louisiana. By all indications, the page was a success as it had ballooned to 335 members by the end of the season. 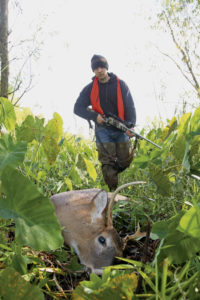 Over the course of the 2019-2020 season, not only posted were the ubiquitous trophy pictures and videos, but there was a solid exchange from where to and how to harvest a deer in the marsh, to cooking them.

Questions like, “How often do you guys wash your hunting clothes?” “When is the peak scraping and breeding period for Area 10?” And, “How much fat do you mix with deer to make hamburger patties,” were just a few.

The thing about hunting the coastal parishes is that they greatly differ from the upland piney woods, bottomland hardwoods and the batture lowlands of the Atchafalaya, Mississippi and Red river systems.

Essentially, the more northerly regions receive much of the attention when it comes to deer hunting in Louisiana. By contrast, coastal marshes are mainly considered duck-hunting habitat, and deer hunting takes sort of a back seat. However, nothing could be further from the truth when it comes to hunting marsh deer in Area 7, 9, and 10.

Rolan Fontenot of Lake Arthur has been a taxidermist for 35 years and has hunted Area 10’s marshes most of those years. Not only has he mounted some exceptional deer harvested in coastal marshes, but also is anecdotally familiar with the overall population of the region.

“There’s a lot more deer in the marsh than people realize,” said Fontenot, 69. “There’s quite a population out there. When I started about 35 years ago, a 110-inch marsh deer was a good deer, and a 130-class deer was a monster. Well, some of them have grown over the years, because I’ve mounted several marsh deer that are knocking on the door of 150 inches.”

The reason? Bordelon said is most of the marshes in Area 10 are not providing the diversity of desirable plants when compared to Area 7 habitat. However, he said it doesn’t mean Area 10 hunters don’t have success. On the contrary.

“By controlling invasives such as Chinese tallow with chemical application in these areas,” Bordelon said, “it will help increase the amount of sunlight reaching the ground, which will promote the growth of more desirable woody and herbaceous plant species. These will serve to attract deer, while improving the amount of available forage.”

Bordelon also mentioned while contrasting coastal habitats, that Area 9’s marsh, like Area 7’s, is very diverse. However — and unfortunately — land loss and saltwater intrusion have degraded many marshes for a multitude of wildlife, including deer in this particular coastal region.

“In general, marshes are producing a higher percentage of herbaceous plants than upland sites,” he said. “The growing season is almost year-round, which is helpful. However, deer in the marsh do not have the same access to hard mast as deer on upland sites. In addition, coastal habitats are extremely vulnerable to storms and inland flooding from surge, which can temporarily knockout available food resources. Upland sites are much more forgiving by comparison to such storms.”

Bordelon said upland sites are on landscapes where active timber management can occur. As a result, active management allows sunlight to reach the forest floor, which increases the amount of forage available in the understory. Last, he said, not all marsh habitats are equal. The amount of open-water, saltwater influence and dominant plant types will influence the quality of available forage.

Louisiana cover some 33.32 million acres, and essentially, 95% of it is behind locked gates. By contrast, the federal government owns 1.4 million acres in Louisiana.

Aaron Hurst of Hathaway, a small, rural farm  community just north of Jennings, is a bowhunter who hunts deer on public land in Area 10. For the past 15 years, Hurst, 36, has hunted  on Lacassine National Wildlife Refuge, where bowhunting is allowed from Oct. 1 through the Friday before the Louisiana coastal zone waterfowl season opens.

Lacassine is a 34,724-acre refuge consisting of freshwater marsh with some natural ridges and levees.

In describing the refuge, Hurst said, “Up and down Lacassine Bayou, you have a little bit of swamp, but for the most part, it’s all marsh that you’ll be hunting. There’s a big section off of the north side of the Intracoastal Waterway as you head west towards Lake Charles. It used to be a big, ol’ island and was pretty open, then hurricanes Rita and Ike put a hurting on it. Now, it’s a big thicket with plenty of deer, but you also have Intracoastal canal bank that has a little bit of levee system on it that you can hunt, too.”

Hurst labels himself a meat hunter and spends much of October on the refuge filling at least one tag.

“That’s always my meat hunt,” Hurst said. “That’s usually a guarantee for me. I’ll usually kill at least one deer a year there. Now, I’ve never killed something big out there, but there are some big ones that have been taken; they just never crossed me. Probably, the oldest deer I’ve harvested as far as bucks go was a 4-point that was somewhere between 3½ and 4 years old.”

Speaking with confidence about Lacassine, Fontenot said, “The refuge is generally open for the entire month of October for bowhunting. And, if you get out there and scout and you hunt religiously for just one month with just a bow, if you don’t limit out, you can’t shoot straight.”

What to look for in marsh

In Fontenot’s experience, there are plusses and minuses to hunting deer in the marsh, but he said they are easier to pattern than upland deer. Deer will make a beaten down muddy road in the soft terrain, creating easy-to-distinguish trails.

“Walking in the marsh is very difficult for both deer and humans,” he said. “So, if you find a well-used trail in the marsh, you’ve pretty well got a deer patterned and know they’re going to be passing that way. In that respect, marsh deer are easier to pattern than deer in the uplands.

“You’re also looking for the normal things as you would in the highlands: trails, tracks, droppings and scrapes. The difference is, they are limited, so you want to look for a combination of marsh trails coming to the levee. If you find where two or three trails come together, get you a bucket and sit there and wait, because a deer is going to pass eventually.”

To catalog deer foods in the region you hunt, one of the best books available is “Checklist of Woody & Herbaceous Deer Food Plants of Louisiana,” written by Dave Moreland, a former deer study leader for LDWF. It’s a great guide with numerous pictures to help you identify preferred deer foods.

If there are any drawbacks to hunting marsh deer during the early fall, it is the heat and mosquitos that go with the terrain.

“I’ve always said that if you want to hunt the marsh, you had to psych yourself out to do one of two things,” Fontenot said. “One is, you agree to get eaten alive. Or two, put on so much clothing you suffocate to death to prepare yourself for the mosquitos. You’ve got one of the two.”

Fontenot points out the marsh is also difficult to walk, using the example of walking through the water and sticky muck of a rice field and the effort it takes.

“It’s difficult, and it’s the same way in the marsh,” he said. “And, if you get on that floating turf — man! You’ve got to take small steps and step sideways or you’ll break through and fall right through it.”

The bottom line is, hunting marsh deer along the coast on public or private land doesn’t get the attention that upland deer receive. But if you’re willing to spend some time and effort in the marsh, you stand a very good chance of putting some backstraps on the rotisserie.

So why not give coastal deer hunting a try this season? It might surprise you just how good it is.