The barometric pressure can be the best weather indicator for increased deer hunting success. Once the patterns of high-pressure systems are learned, seeing bucks up and feeding will become a common occurrence.

When the high-pressure cold fronts move through, it means the temperature will be dropping and the wind will be increasing from the pressure change. I’ve read many studies showing a threefold increase in buck activity, and a 1:1 doe to buck movement ratio during higher pressures over 30 inHg. Through the years, my woods sightings and camera research have correlated the same amazing results.

This season has been a new challenge using my recurve bows on very limited hunting time with a newborn baby boy. Still, each week I drive over seven hours, even if its just to spend a few hours of one day in the woods. Since I have such limited time, I try to spend days in the woods with the best weather, which I base upon high pressure systems.

After close calls with does seven times in bow range the first two month of this season using the struggle stick, my luck changed on an eventful morning where a cold front was pushing through.

Unable to get up north as early as planned with dad duty, I got to the woods after day break. Another hunter was in my planned spot, so I traveled to a deeper area I had only been to once before. Just as I was nearing the tree I intended to climb, I came face to face with a mature buck making a rub 15 yards away in a slough, but he saw me first. The big fellow had created a bubble line passing just 8 yards upwind from my climbed tree. I was just a few minutes too late.

While in my climber, another nice racked buck walked 34 yards out of range in the thick sapling ridge. Yet it all came together when the morning’s third buck walked where the other big one had created his bubble trail. I was able to make a great shot using my 80-pound Black Widow recurve using a heavy 700 grain Piledriver arrow tipped with a wide 1.5” cut Steel Force 2-bladed broadhead. While waiting for my buck to expire from the lung and liver shot, I had went jog in the wet leaves and stalked then shot a big spotted boar.

Later, I went back to track my buck which had only made it 35 yards. I was thrilled about finally getting to down some fresh wild venison this season just in time to serve smoked backstraps as the main dish for Thanksgiving. Also, my baby boy and I eat bone broth daily and we were out of bones, so that was the main mission on getting the tasty buck. Even the cartilage, ligaments and tendons don’t go to waste at my house and are now my favorite parts of the deer to consume within my homemade broth. 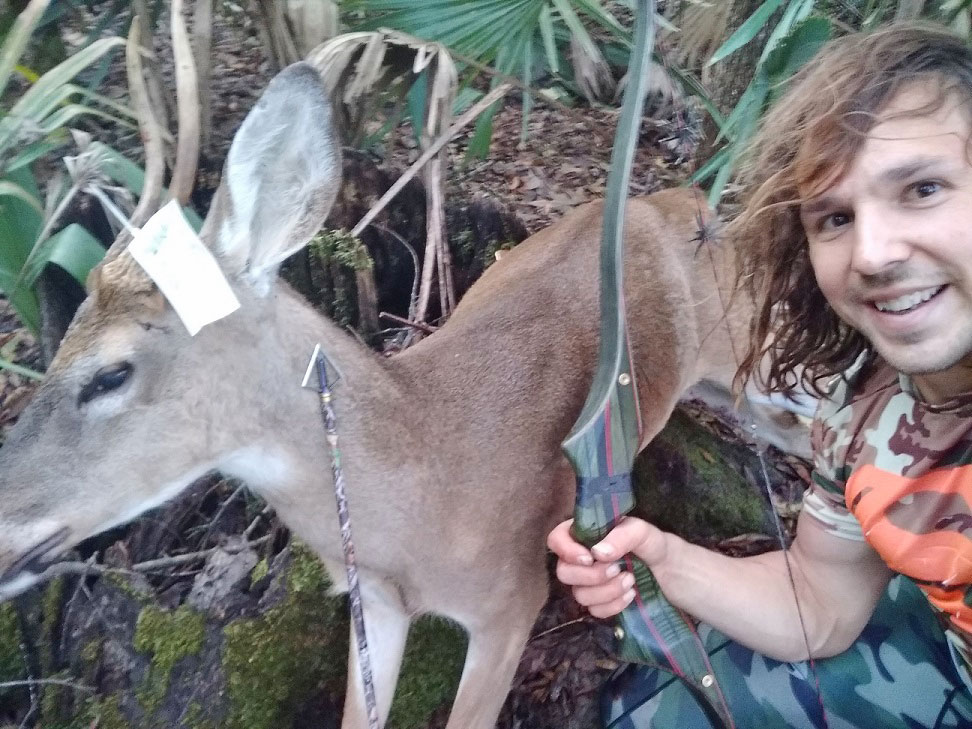 I shared the buck with my brother’s family who has quadruplets to feed. He had joined me that morning on his first ever compound bow hunt. He quickly learned just how challenging the archery pursuit can be having deer within 10 yards but not having any makeable shots.

In the same boat trying to feed a big family of four kids is my best friend, Brian Cifreo. He has been focusing on hunting rising pressure conditions for many years and teaches me a lot on our weekend’s together at my camp where he leaves his camper. His brother taught him how to deer hunt after an autumn rain storm had passed back when they were kids. After many years he put the pieces together that it was the rising barometric pressure that is correlating to all his deer sightings after rain and the following day.

His best small game hunts and fishing trips have usually occurred during these conditions as well.  He says that’s when everything wants to feed because the pressure change affects their stomachs.

Well this October, Brian had the best deer hunting week of his life on Louisiana public land. It all began on a rainy Monday at work where they got called off due to the inclement weather. He had packed his Black Widow recurve in the truck just in the hopes of getting free from his electrical job.

After the rain creates the perfect stealthy stalking conditions, and Brian loves to stalk just as much as sit in a tree. He ventured to an area he never hunted in many years and got wet crossing several deep sloughs to access areas other hunters don’t often roam. As he was creeping along a cocklebur patch in a river bottom, two bucks stirred. Magically, an 8-pointer stopped in a gap at 18 yards. Brian made the perfect shot, slicing through the heart with his four-blade Muzzy broadhead. 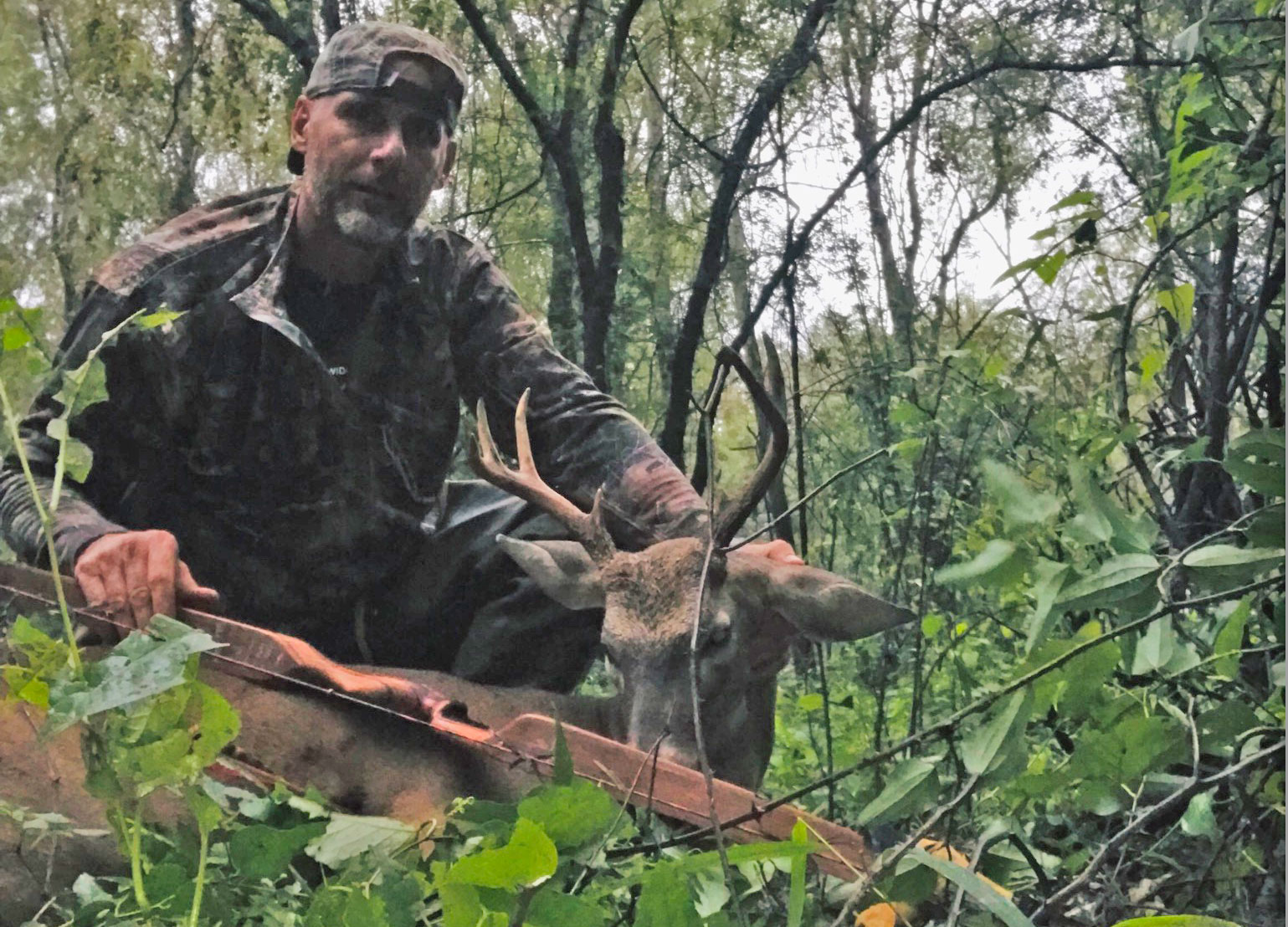 Well the success would continue his next day in the woods. That Saturday Brian went back to a different area in a river bottom filled with nuttall acorns. A tropical storm had passed the night before and the windy conditions of the rising pressure that pushed the storm eastward through Mississippi had the animals feeding. During the morning sit a nice boar moved through, and Brian downed the hog with his compound bow. 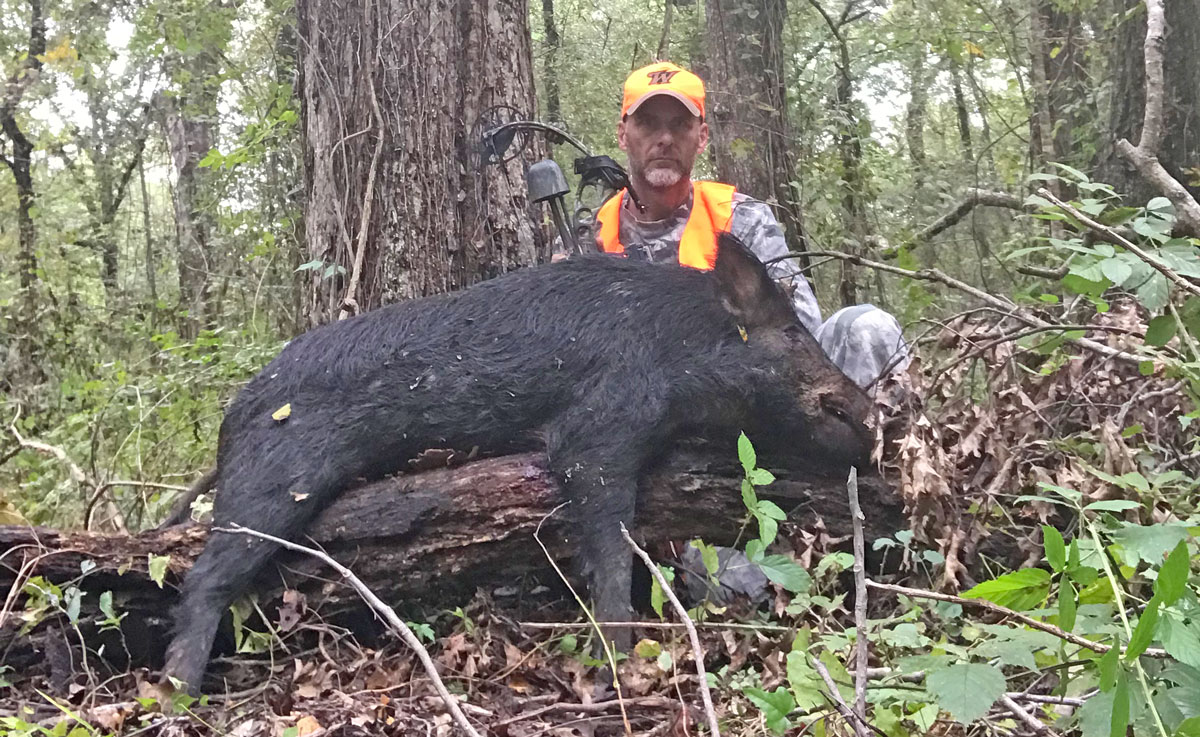 After moving his climber to a hot nuttall to get upwind of that location, the action picked up again. Brian had set up at a new nuttall tree much earlier than normal for an evening sit because he knew the conditions were perfect. And behold, a beautiful 100-inch buck with a 16.25 inside spread came out just 15 yards away to feed shortly into the hunt. An even bigger buck was with him, but out of archery range in the distance. The arrow sailed true and Brian had downed his largest ever archery buck after 28 years of bowhunting.

After the shot the confused larger buck ran and stopped underneath Brian in the climber. It was a week my buddy will never forget, and the decades of learning the best weather conditions to hunt had paid off.

The next weekend stalking in windy conditions Brian stalked a nice 6-pointer to 8 yards on a compound bow hunt in very windy conditions the day after the front arrived. He held out to fill his last tag for something with more bone.

Stalk hunting with our recurve bows is one of the hardest types of hunting, but it can be very productive in the right conditions. The wet leaves after a front is when we do most of our stalking since we can walk quietly. Brian’s stalked 8-pointer was taken in similar conditions as my best recurve buck taken on a stalk hunt two seasons ago. Getting in the woods with rain gear to be ready at a good location just as the rain stops is optimal.

Once the wind from a high-pressure front kicks in, it really helps keep human movement hidden. With all the leaves and branches swaying, stalking conditions are even better. I was able to stalk does a few times within 20 yards this season during these windy wet leaf conditions. However, a ducking doe and taking out a 1 inch sapling instead of the deer had a couple does skipping off. Brian had missed a doe with his recurve as well from a ducked arrow this season.

Also, I shot several hogs this season traditionally stalking in the wind. 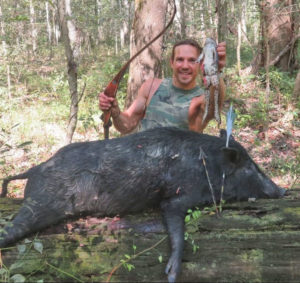 Once the leaves dry up is when we usually get in the climber. The crunchy leaves put the stationary hunter in the advantage, so approaching deer can be heard coming. The hard wind of a high-pressure system usually dies down in the early mornings and late evenings by the second day. This is when being elevated and stationary creates a better advantage.

A late fall to wintertime front’s strong winds are usually very consistent and different from the typically south to southeast winds Louisiana receives to start the season. Even though the weather forecast often says a northward wind. The wind often blows from the southwest to west-northwest during the initial day of the front. The next day it’ll begin to switch consistently north. Just before the pressure peaks at its highest is when Brian has his most success seeing game on the second day of the front.

By the third day a northeast wind blows. The hunting usually remains action packed until the pressure begins to unfavorably drop with little wind. That’s when our animal sightings really plummet. Instead of hunting low pressure conditions we typically run full throttle through the woods and scout for new spots during these unproductive times and await the next high-pressure front.

The best barometric pressure to hunt is when it gets over 30 inHG with 30.10 – 30.30 being the sweet spot for animals to get up and move in daylight. The few magical hours during a hard front when the pressure is rising fast is when I see the majority of my bucks.

Brian uses his Weather.com app to check current pressure. I like to use Weather Underground for my source on future pressure conditions for the week ahead.

Of course die hard hunting dads like Brian and I will be roaming the public land woods every chance we get throughout the season, but when the pressure gauge is showing a 30 with the arrow pointed up is when we strike the most.

In this segment of Sportsman TV, Chef Nathan Richard of Cuvée Wine Bar and Bistro shows us how to make Duck Crackling Biscuits. […]

The Louisiana Department of Wildlife and Fisheries has added another CWD drop-off location in the Tensas River National Wildlife Refuge. […]