An unfortunate decision to second-guess a blood trailing dog resulted in Ryan Foster, a 30-year-old oil field worker from Benton, being unable to recover his 16-point buck until three days later. He was able to salvage the head and rack but coyotes had reduced the carcass to a skeleton.

Hunting on a private tract in Bossier Parish, Foster has had the buck he was after on trail cameras since August.

“I work 24 hour shifts in the oil field which means I’m off work every other day,” Foster said. “I hunt this buck on all of my off days.”

Using cameras set up in various locations, Foster meticulously patterned this buck to find out where he was bedded down and when he came out.

“After getting night time photos of the buck, I noticed that he was showing up earlier and earlier. For example,” Foster said, “I had one photo of him coming out at 5:00. Then things went down hill as he simply disappeared for two weeks. I assumed maybe he’d moved onto a neighbor’s property that joined the tract I hunted but in talking with the neighbor, he hadn’t seen the buck either. I was afraid maybe he had ventured away and gotten shot, so I started looking for another buck to hunt.”

Foster switched his focus to a wide-racked 8-point and decided his big buck had vanished and began concentrating on the big 8.

“I was really surprised after assuming my big buck was gone that he showed up on camera in company with the big 8-point,” Foster said. “He had shown up some 400 yards from where I had been seeing him and this time, he was in my ‘duck hole,’ a spot where I duck hunt but at the time was dry.”

The duck hole was adjacent to a thick area where Foster felt confident the buck was bedding down. He put one of his cameras on the area, threw out some corn and the first day, he had a photo of the big buck during daylight. 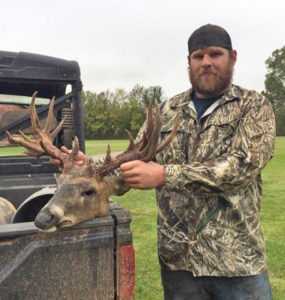 “My dad and I took turns hunting the buck and he’d hunt while I was at work,” Foster said. “I texted dad one morning to see if he was going. The temperature was 70 degrees and dad decided against it. I got off work that morning, checked my camera and saw that he had come out in broad daylight. I texted dad and told him he’d messed up.”

Deciding the best place to set up to ambush the buck was from his duck blind, every day when he was off work, Foster crawled into his blind to see if the buck would appear.

“On the afternoon of Oct. 26, I was sitting in the duck blind with my 35 Whelan when a 4-point buck and a doe stepped out. While I was watching them, I looked to my right and there stood the big buck,” he continued.

The buck was standing broadside but half his body was concealed by tall grass. Gauging where he thought the vitals were, Foster squeezed off a shot and the buck dropped down and then bolted. 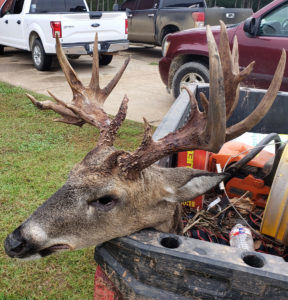 “I walked down to where the buck was standing and found some dark blood so I called my buddy to come help me look for the deer,” Foster said. “We tracked him for 95 yards where the last blood was found. I called a friend with a blood trailing dog to come help. The dog he had used for several years had died so he brought his 7 month old dog he is training.

“Since the deer was shot on his left side, some in the group suggested that the deer was more likely to run to his left. The pup picked up the trail and started moving to the right but after awhile, they called him back and started looking to the left.”

After searching without results until around midnight, the hunt was suspended for the night. Rain was forecast for later that night and the next day and Foster had to work the next morning. He secured permission from his boss to have a substitute work for him so he could continue his search, but his search the following day was fruitless.

The third day after shooting the buck, Foster decided to get on his Ranger and ride the perimeter between his property and some fields to see what he might find.

“I drove right to him, or what was left of him,” Foster lamented. “Coyotes had completely stripped the carcass and all I found was the head and rack and a pile of bones.”

“When we called the dog off after he went to the right,” he said, “he was within 30 yards of where I found the buck. We should have trusted the dog that night.”