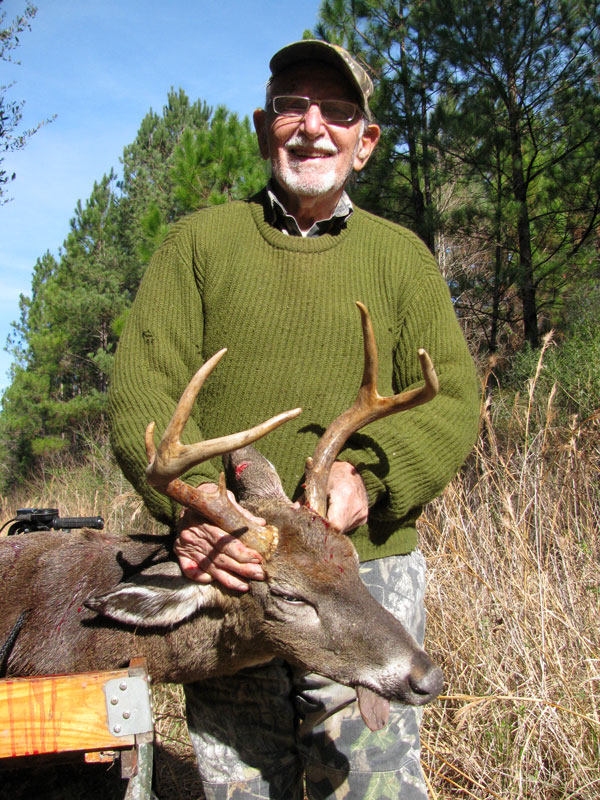 As New Year’s approaches, it takes a different approach to tag out a nice buck, and it doesn’t take a trail-camera to let you know. Follow this advice for success in Louisiana’s piney woods.

“Looking at pics on a game cam, right?” Comes the reader reaction. “Next to the feeder at the food plot, right?”

Nope. In fact, the excited hunter in question doesn’t even own a game cam, despite a constant barrage of cajoling from his hunting friends and family.

“Heck,” he smirks when asked about his archaic hunting habits. “I know darn well most deer in southeast Louisiana are mostly nocturnal, especially by Christmas. Why confirm it with a game cam? ”

None of  “’dem “new-fangled game feeders” were in sight, either, and the closest food plot was a quarter-mile away.

Also, from a distance of 50 feet behind him (where I stood), his attendant “score” comment was slightly mis-heard. Actually, he was quickly following up his initial exclamation by asking “Wonder what’s the score?”

You see, a half-hour earlier, we’d left the camp’s mega-screen TV with the LSU-Georgia game at halftime and the score kinda tight. What a difference a year makes!

In fact, this hunter’s idea of “scoring” a deer is measuring the decibel level of the “OOOHS!” and “YUMS!” from the dinner or tailgate “paaaw-ty” guests when the Bambi fajitas, cutlets or parmesan are served up.

“That’s a trophy everyone can appreciate,” is how he explains his Paleolithic hunting philosophy. Hunters and non-hunters alike. Heck, even some anti-hunters come around when they taste the properly prepared and cooked fruits of our harvest. After sampling some backstrap mignon, in merlot — mushroom sauce — oh sure, they remain “Bambi lovers.” But after that first serving, it’s in a radically different way!

In fact, during the comment initiating this story, the excited hunter in question was looking at the ground, waving me over, and pointing at a nearby pine sapling.

“Oh yeah!” I whooped while approaching, crouching and focusing. “Does look like the handiwork of a nice one!”

The handiwork was a rub on a pine sapling about 10 inches in circumference. The tracks around it also looked impressive. They came from two intersecting deer trails and went in both directions. And the droppings scattered nearby were not Raisinet size, more like Milk Duds size. After accidently stepping on a couple, they were the size of Junior Mints.

So we were pumped. Oh, and yes, you read right. We were actually scouting for deer. In the actual woods. Not on a food plot. A reactionary practice for sure.

In the December 2001 issue of Louisiana Sportsman, I wrote an article titled “Hunt Hard — Stay Young.” I marveled that a 75-year-old man, my father, Humberto N. Fontova, could hunt ducks and deer with an obsession matching his kids and grandkids.

And these were not the catered variety of duck and deer hunts. These were, and are, mostly roughing-it hunts on southeast Louisiana piney woods property leases. I’ve seen “dedicated” and “expert” deer hunters move to southeast Louisiana from the midwest or northeast, employ their “dedication” and “expertise” in our thick, brushy, piney-woods habitat — and quickly take up golf.

Well, my father still hunts deer as fanatically, and practically in the same manner, at age 94 as he did when featured in that long-ago article. And he continues to hunt mostly from portable ladder stands in thick or select-cut timberlands.

Health gurus regale us with drugs, potions and regimens for a long, active and happy life, but I haven’t seen one prescribe hunting — yet I’ve never seen anything remotely as effective. That the hunts are shared with kids and grandkids, and the trophies — antlers or no antlers, and whatever their size — are shared during family feasts, holiday celebrations, tailgate paw-ties, etc. — just might contribute to the amazing success of the Fontova family’s prescription for a long and happy life.

The rub and tracks that provoked the “Whoo-ee!” were near an intersection of two heavily used trails near an edge between two different types of timber habitat. Here, a 15-year-old pine select-cut met a creekbottom of gums, maples and water oaks.

Dad’s ladder stand had stood at an almost identical habitat intersection a few hundred yards away since Thanksgiving, long by our standards. And by Christmas, the trails leading to the corn, very widely dispersed by hand, looked like cattle ruts.

But three hunts — two morning and one evening — produced not so much as a deer sighting. The sign was obviously from nighttime movement. Oh, I know, I know, you’re right: a game cam could have shown us that without the “bother” of the hunts. But for us, deer hunts without a kill hardly qualify as “bother.” There’s no bother at all watching the woods come alive on a crisp winter morning, deer or no deer, thank you.

So, as we often do in mid- or late season, we decided to re-locate the lightweight ladder stand. Things had changed since its initial placement. Other factors influenced our move. For one, by this time of year, the rut is finally raging in southeast Louisiana’s piney woods — often, it keeps raging after the season closes.

Also, many of the natural food sources available in early November, including acorns and browse, have vanished. The prime browse vanishes from frosts and freezes. The acorns vanish mostly from high creeks and branches flooding oak bottoms and washing away or rotting the water oak acorns that litter the floor in early season. Consequently, our widely dispersed corn becomes all the more attractive both to the does that attract bucks this time of the year, and to ravenous bucks themselves as they expend energy during the rut.

So all we did — not exactly rocket science — was follow those cattle-like trails out from the crude bait stations and try to determine where the deer making all those tracks and rubs were hanging during most daylight hours.

Naturally, with diligent scouting we had patterned the area’s deer starting back in late October, but by Christmas, and after frequent hunts, most of those same deer had patterned us.

Now, we were pumped to find this fresh sign in an area we’d left untouched. “Of course,” Dad answered, “shoulda figured we’d find the freshest sign around here — this terrible-looking thicket near the logged-out bottom.” The place had several rut-like trails leading in and out of it.

Yep, we had our spot, especially since it was about 40 to 60 yards, mostly out in front of the water oak where we placed the stand, upwind (given a north wind) of the two trails the intersected at the “whooo-ee!” rub line.

A hundred pounds of corn spread very widely in the open area of the thicket and along the three trails leading to it sweetened the setup. I set up my climber in a small pine on the edge of the thicket about 300 yards away from Dad.

The hunt was still a week away and the 5-day forecast said a front was on the way. Ideally it would barrel through a day or two before the hunt; we always do best in that situation. But when frosty, we spot better movement late in the morning, from 9:30 to 11:30, after the frost has melted off from the sun.

The front barreled through exactly on schedule. Our hopes were high as we crunched through frost to our stands.

By 10:25 a.m., with the sun high, I was shrugging off the hunt and giving deep thanks for the simple blessing of a gorgeous winter morning in the woods with my 93-year-old dad.

“Is that movement through the pines on my left?” I gasped to myself. Sure is. Is it another blue jay going after the corn? Or another crow? Or another squirrel?

NOPE! It’s actually a deer, with another one close behind it. My heart started hammering. The does were maybe 70 yards out, crossing through a sage clearing, barely visible through the select-cut pines. My legs felt rubbery. My knees started knocking, my jaw quivering.

“Surely there’s a buck chasing them?” I thought to myself as the shakes started big-time. Hope I can keep the crosshairs steady by resting against a strategically growing tree-branch. I peered through the fogged-up scope, trying desperately to steady it while holding my breath. It’s now or never…now or never….

The shot shocked and jolted me as I trembled in the climbing stand. Good thing I was harnessed up good and tight.

But the shot wasn’t mine. “Musta been Dad!” I thought to myself. “Nobody else is out here this morning. Wonder what he shot at?” Meanwhile the does picked up speed and entered the thicket with white flags bouncing crazily.

“Better keep my rifle up,” I thought. “A buck’s gotta be following.”

For 10 minutes, I kept the gun up and aimed. Finally, my convulsions subsided — just as the iPhone buzzed.

“Be RIGHT THERE!” I replied. So that’s what he shot at, I whooped!

I almost killed myself unharnessing and humping it down the tree with trembling hands and knocking knees. I hit the ground stumbling and continued stumbling the 300 yards through the thicket. I saw it from 50 yards off. What luck! A shaft of sunlight penetrated through the gums and water oaks and hit the antlers perfectly, illuminating them. They’d be no great shakes in Texas or the Midwest. But to us, they were GLORIOUS!

That “WHOOOO-EEE!” from the beginning of the story, was 20 decibels louder this time, and accompanied by some long and mighty “abrazos” — bear hugs.