When you see the biggest buck you have ever laid eyes on, standing 20 yards from you, and you release the bolt on your crossbow and know you have made a good shot, what is one of the first things you do?

“I threw up,” chuckled 24-year-old Brennan Morris who lives in Rayville.

Morris and his two brothers lease a 5,000 acre farm in Richland Parish, acreage where they grow corn and soy beans. The farm also serves as hunting grounds for the brothers and a few friends, and for the past eight years they have tilled the soil and given the deer on the property their serious attention .

“We keep out feed for the deer and utilize a series of ‘covert’ cameras, the type that signals your phone when an image appears on one of the cameras,” he said.

The woods where the brothers hunt is prime area to hold good deer. Located near Little Creek, there is abundant nutritional food for the deer, food sources such as acorn mast, green briar and persimmons. 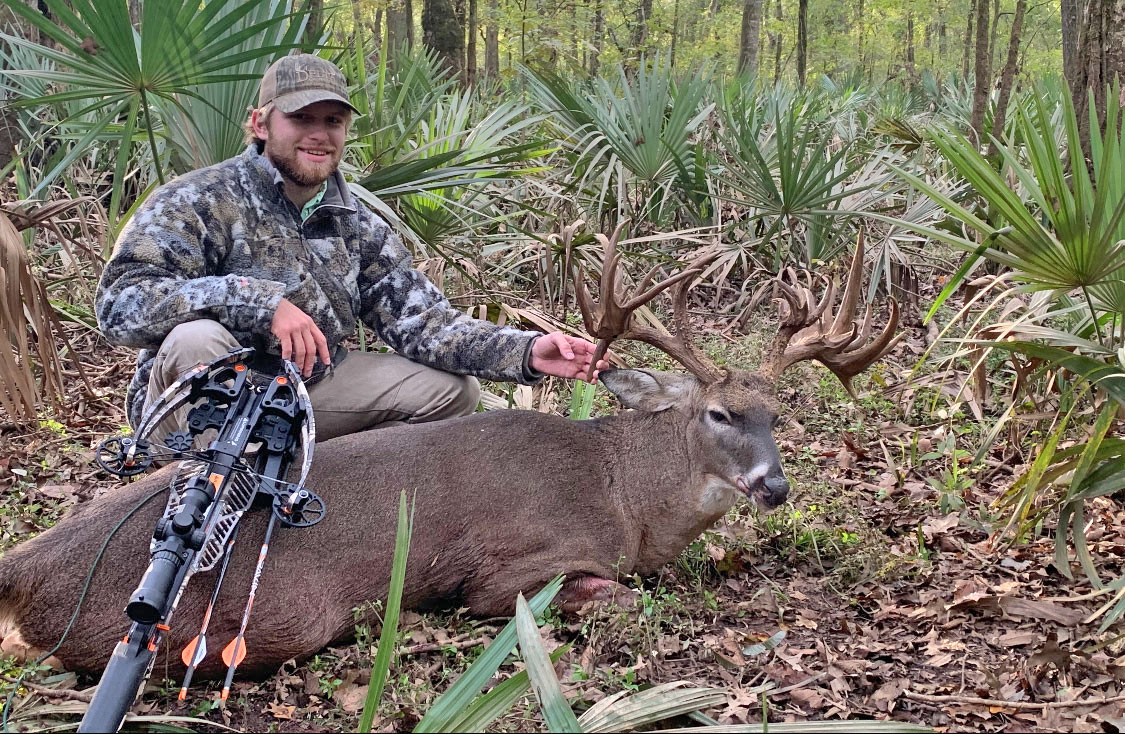 “We have a 20 foot tall ladder stand that has been up for about five years; one of our permanent bow stands,” Morris said. “This stand is just off the creek setting on a slight ridge and is situated between the creek and bedding areas the deer use, and we have taken a few good bucks in that area. One of our guys downed a big 12-point earlier this season.”

Four years ago, images of a good buck began appearing on the cameras. In 2017, the buck, estimated to be 3 years old, was a 6-point that looked like it had potential to be special for the following season.

“This deer had a couple of unusual characteristics,” Morris said. “He had extra long brow tines and something had happened to his tail because it was quite short. This enabled us to identify him any time he showed up on camera.”

Fast forward to the 2018 season, the year when it was expected that one of the group would be able to put a tag on this buck.

“Something happened that caused us to hold off on trying for him that year,” Morris noted. “He had broken off both main beams and had only one long brow tine. The short tail let us know it was the one from a year ago and we weren’t going to target him with such a messed up rack.”

Running cameras before last season, the buck once again had a disappointing rack that gave him another grace period because he was not what Morris and his hunting partners were expecting.

“Last year, we were excited assuming the buck would be a definite ‘shooter’ during the 2019 season,” he said. “It was not to be because he showed up as a 6-point with only a cow horn spike antler on one side, while the other side consisted of a main beam, G2 and G3 with the tell-tale long brow tines and short tail.”

Bring on deer season 2020. Covert cameras continued in operation, feed and minerals were in place, but there was an air of disappointment because the only good deer to show up on cameras was the big 12-point one of the hunters had taken. It was almost like the dream of the targeted buck had burst like a pin-stuck balloon because based on last year’s photos, he was nothing to be excited about and probably wouldn’t be this season either.

“On Sunday night I was lying in bed when my phone ‘pinged’, I clicked on it and there was an image of this unbelievable buck,” Morris said. “The camera that showed the buck was near the tall 20 ladder stand that belonged to another member of our group. I called him and told him it looks like a state record deer is around his stand and he thought I was kidding.” 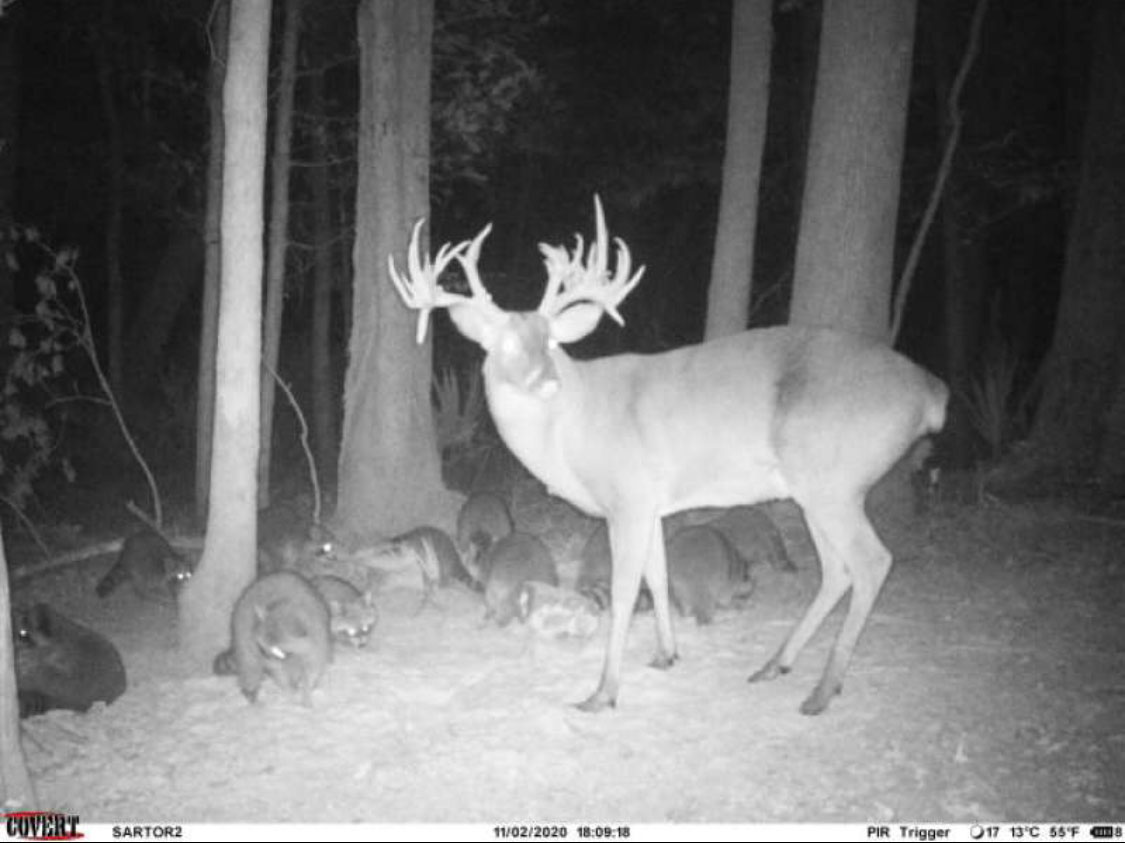 Nobody was able to be on the stand that Monday or Tuesday, but trail camera photos showed that the buck was on camera right at daylight around 6 a.m. Tuesday morning. One of the group was on that stand Tuesday afternoon, Wednesday morning and afternoon without seeing anything. One of Morris’ brothers who hunted Wednesday noted that the corn was gone, so he drove his Ranger onto the plot and scattered feed. What was interesting and discouraging was not a single deer had come to the feed that night.

Thursday morning, Nov. 5, Morris decided to hold off on his plowing duties for awhile and spend a couple of hours on the stand before going to work.

“I had been running a tractor all week and since nobody else was planning to hunt that morning, I decided to give it a try,” he said. “I like to bow hunt but I haven’t been able to practice so I borrowed a friend’s crossbow. It was a good one, a Raven, but I was not familiar with it.

“When I got on the stand before daylight, I realized I had forgotten to cock it before getting in the stand, so I had to do that and I was pretty noisy. Then when I tried to put a bolt in it, it bumped a limb, I dropped it as it clanged on steps all the way to the ground. That left me with only one bolt but I doubted I’d need it since I was sure I had scared away any deer in the area.”

Then he heard a deer walking in the palmettos behind him and suddenly stopped; Morris assumed the deer had winded him. He happened to look down and there stood the monster buck standing behind some brush 20 yards away. Morris pivoted around to have a shot as soon as the buck stepped out of the thicket.

“When he stepped out, I got the scope on him, hit the trigger and it clicked; I had forgotten to press the safety,” Morris said. “I can’t believe he was still standing there giving me another chance but I hit the trigger, felt I had made a good shot. He ran about 75 yards and I heard him crash.

“I called my brother and then a friend and I was so totally shook up that I had to hang up on the friend because I was about to throw up, and I did,” he laughed. 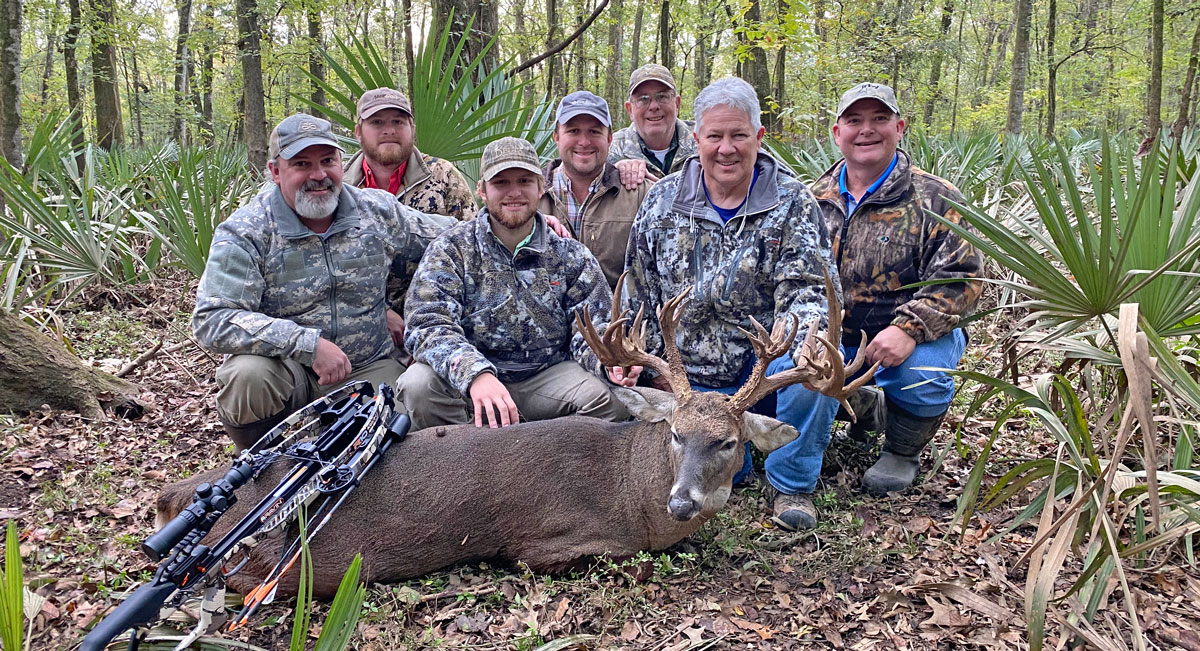 Cecil Reddick, official scorer for Buckmasters, measured a total of 46 scoreable points on the 7 ½ year old buck with overall measurements of an astounding 309 6/8 inches of antler.

After a 60 day drying period, a Boone and Crockett scorer measured the buck’s rack as 275 5/8 inches. The current crossbow state record is a 186 1/8-inch buck taken in Madison Parish in 2015. Also significant is that the all time nontypical record for bucks taken in Louisiana by any method is a 281 6/8 buck taken by James McMurray in 1994. This would make the Morris buck not only the leader for crossbows but in second place on the all-time nontypical list.