Who knew that Barney Rubble’s next-door neighbor would be part of a story about a huge buck killed in Louisiana’s Sabine Parish?

But Fred Flintstone’s name indeed came up when Stoney Cotton of Zwolle discussed how he killed a huge 11-point buck on Nov. 3 that measured 150 inches.

Cotton said he was watching two does in a shooting lane in front of his 8×8, elevated box blind in a stand of pines that morning when he turned around and looked out the back window of the stand, and there was this trophy buck easing across a lane behind the stand.

“I Fred Flintstone’d my way across the stand in my rolling chair,” Cotton said. “I had to take my gun out of the window and roll across to the other window and get my gun up. When I got ready, his head and neck were in the woods, but I had a decent shot.

“He mule-kicked, so I knew he was hit good. I went down there and found blood. He fell about 70 yards up into a big oak thicket.”

“When I saw him, he was just walking across. If he was following another deer, I didn’t see it,” Cotton said. 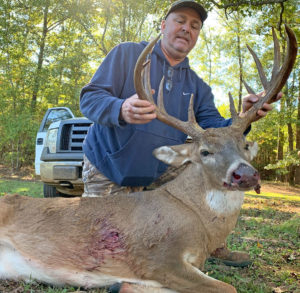 Everything happens for a reason

Cotton took the buck because a series of hunts in another stand, for another buck, hadn’t worked out.

“I knew this buck; I’d seen pictures of him. He wasn’t on my part of our lease, but he was in another area, and a buddy who had trail cameras out had a list of his Top 10 bucks, and this one was No. 1. I guess he’s got a new No. 1 now,” Cotton said. “This was my first year to put out cameras; I put out three. My brother and I hunt stands, and I had some pictures of a real good one. I hunted this one stand three hunts in a row, and I decided to hunt another stand that day, a stand that didn’t have a camera on it.”

Cotton hadn’t been in his stand long before a couple of does came out in the shooting lane in front of him, feeding on corn he had in a gravity feeder.

“I’ve got mowed lanes in the pines; I mow these lanes every year. We keep two lanes moved, one on either side, with the stand in the middle,” he said. “He came in the lane behind me.”

Cotton said the big buck is his “new, all-time best — and I’ve killed quite a few.”

Raceland’s David King and David McMath were surprised with their catches of numerous quality bass at Lac Des Allemands Feb. 5. […]

Johnny Watkins of Longville has taken a treasure trove of huge largemouth bass in southwestern Louisiana’s rivers and reservoirs. Could he be the best? […]