Electrical engineer James Goldman, 52, who lives near Sterlington, is thankful his dad, Jimmy, who lives across the street from him outside town, has a nice patch of woods behind his house. That 75 acre wood lot has been the sometimes hangout for a buck that defies description.

“I found this deer in 2016 when I got interested in upgrading my trail cameras. I belong to a hunting club in Union Parish and told my dad I was going to the club to set up the cameras and experiment with them. He suggested that since he puts out corn for birds and deer behind his house why not put them out there and save myself the drive up there if I was just going to be testing my cameras. I decided to follow his suggestion,” Goldman said.

After leaving the cameras out for a couple of days, his dad checked the cameras for him, telling him he needed to come look at what was showing up on a camera. It was a buck with an unbelievable tangle of antler points on his head, a total of 20 points.

“My dad had been throwing only a tea cup of corn out each day and after seeing that buck, I decided to put automatic feeders out on dad’s land. Others who had reported seeing the buck had noted he was covering a lot of territory and would make an appearance in the same area about once every 10 to 14 days. I discovered this was true as I’d get the deer on camera every couple of weeks or so and he would always show up in the middle of the night,” said Goldman.

The buck showed up on camera for the first time near the end of the 2016-17 hunting season. Goldman began feeding in September 2017 but the deer didn’t show up again until October.

“During the 2017-18 hunting season I’d get him on camera, but again, it was always at night, with one exception. He had only shown up once in the daylight and just my luck, that was when I was gone on a deer hunt to Kansas,” Goldman said. 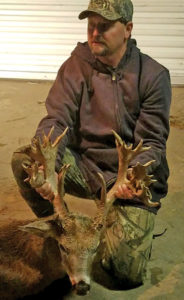 Goldman, who works for Valmet as project manager in the paper industry, often travels outside the country with his job.

“I was in Canada calling on a paper mill and with my upgraded cameras I could get photos on my phone whenever something tripped the camera, no matter where I was. I started seeing the buck every two to three nights on my phone. Wednesday he came out just after dark and just before daylight Thursday morning,” said Goldman.

Flying home Thursday, Goldman used his climbing stand to scale a tree in his dad’s yard the next day. In addition to the corn feeders, he had also put out rice bran and the does started feeding on it immediately. He didn’t see the buck Friday and went to his hunting lease Saturday morning to sight in his rifles, not returning home until around 4:00 that afternoon.

“I walked across the street to my dad’s yard and got on the stand and deer started coming out almost immediately to feed on the rice bran. A small 6-point buck entertained me for awhile as it chased a doe and did some grunting,” he said.

As the evening light was fading, Goldman saw another deer approaching from the woods and peering through his scope on his Remington 7 mag, he saw that it was the buck he had been hunting.

“He stepped out at 50 yards, I put the crosshairs on his shoulder and hit the trigger. He ran only a few yards and I saw him fall,” Goldman said.

Counting the mass of antlers on the buck’s head, Goldman counted 40 points, some of which were not long enough to be measured. The buck was determined to be 5 ½ or 6 ½ years old and weighed 185 pounds.

“Last hunting season, he was a real stud. I had a big 9-point hanging around and apparently he and my big buck fought resulting in my buck losing half his rack. I decided not to take him if I had the chance and I’m glad I waited,” said Goldman, “because this year, I got him with his rack intact.”

Greg Hicks, official scorer for Buckmasters, put the tape on Goldman’s trophy for a score of 184 5/8 inches.