Rocky Bleier was a football player with the Pittsburgh Steelers. After his rookie season, he was drafted into the Army during the Vietnam conflict. Even after injuries, he returned to the Steelers and became a hero by playing in four Super Bowl victories, catching a touchdown pass from Terry Bradshaw in Super Bowl XIII, giving the team a lead they never relinquished.

Rocky Bleier was a hero. Although not on the same level for sure, Lori Gaskin sees her uncle Rocky Crawford as a hero because he put her on his deer stand and helped her in the conquest of the biggest buck she ever saw.

“I’d have never gotten this buck had my uncle not been nearby to guide and direct me the afternoon of November 1,” said Gaskin.

This is the way it all went down. Gaskin, mother of three who lives near Dubach in Lincoln Parish, responded to her uncle’s invitation to sit on his deer stand on 30 acres of land owned by the family in Lincoln Parish.

“I had worked around the house all morning and had run some errands when my uncle called me inviting me to go sit on his box stand. I agreed but around 5:00 that afternoon, I suddenly realized I hadn’t bought my hunting license yet, so I ran to Cranford’s Northside Grocery and Sporting Goods, bought my license and got on the stand about 5:30 that afternoon,” Gaskin recalled.

Not only was she invited to sit on her uncle’s stand, he walked her to the stand and decided to sit 50 yards to one side of her to give her another pair of eyes to watch for deer.

Uncle sets niece up for big one

“I had sat on the stand only a short while when I saw a doe. I texted Uncle Rocky and he responded he saw it too. Then I saw him suddenly look like he had seen something so he let me know he was looking at a big buck that was headed my way. He could have easily shot it but since he knew I had never gotten a big buck, he wanted me to have the chance at this buck,” Gaskin said.

Sitting and watching the area her uncle indicated the deer was headed, Gaskin got her Remington .243 out the window and got ready.

“After I got my gun up, all I could see was horns but the deer got behind a big tree. He had his eye on the doe until he finally stepped into a clearing and I shot. I felt I had made a good shot but the deer ran off and my uncle told me to just sit quiet for awhile to give it time to expire,” she said. 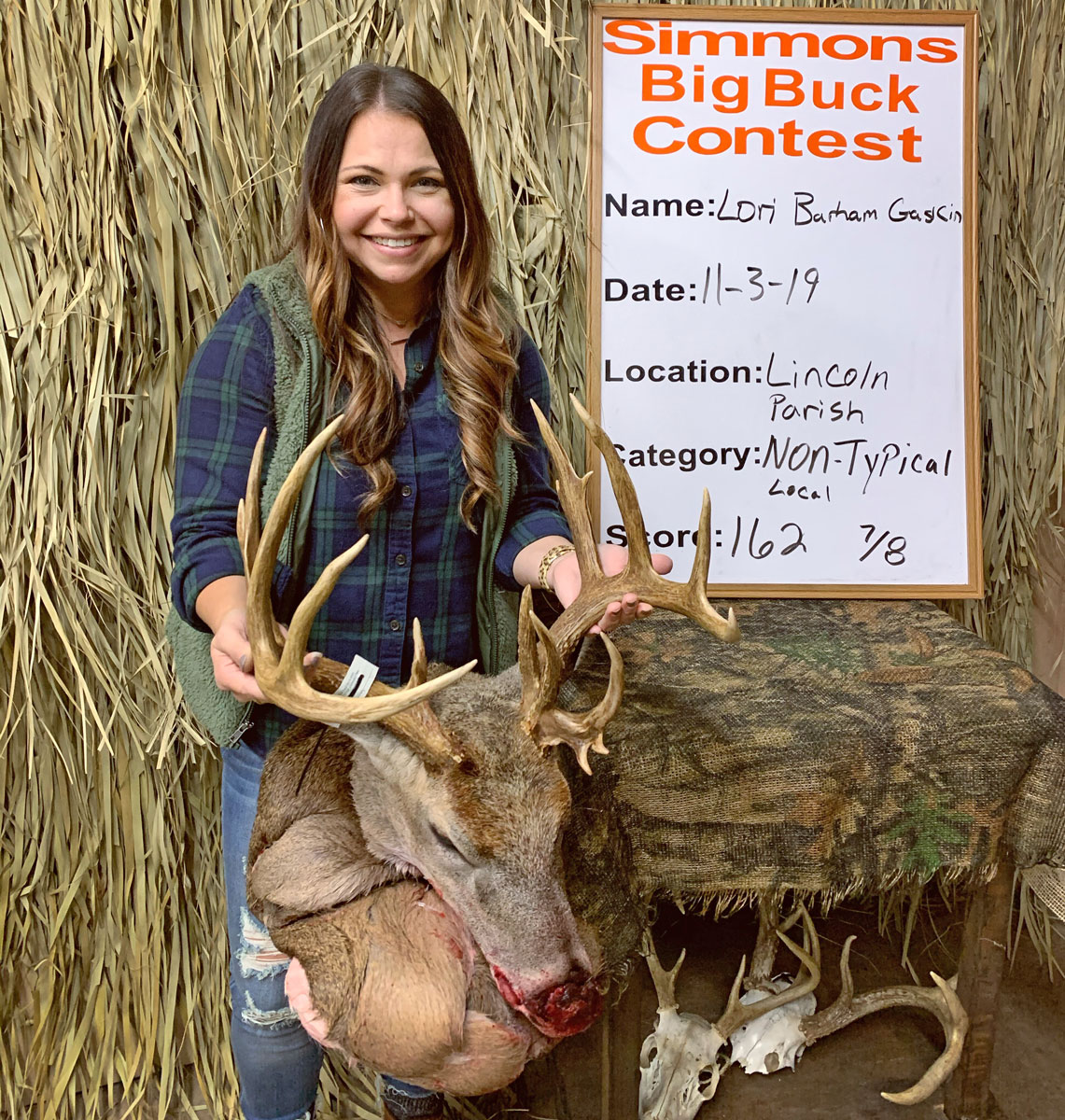 Walking up to where the deer was standing, it was getting dark so they used flashlights to discover the buck that had only run about 80 yards before expiring.

“I could hardly talk when I saw how many points it had. We counted points and I called my husband to tell him I had shot a buck with 17 antler points. He didn’t believe it so we counted again. I called him back and told him I was wrong. It didn’t have 17; it had 18 points,” Gaskin laughed.

The buck was scored as a 17 point (the 18th point was less than one inch) by Greg Hicks, Buckmaster official scorer at 162 6/8 inches while she entered the buck in the Simmons Sporting Goods Big Buck Contest with a score of 162 7/8. Inside spread was 14 2/8 inches with main beams near 20 inches each. The weight was 212 pounds and the age was determined to be 5 ½ years.