Wade Gibson, 45, from West Monroe, works as a Certified Registered Nurse Anesthetist at Glenwood Hospital in his home town. He may have thought he needed a dose of anesthesia to cope with what happened on the morning of Nov. 1 when “Hooks,” a huge double drop tine buck, stepped out in front of his stand.

Gibson hunts on a 3,000 acre hunting club leased from a timber company in Union Parish.

“Members of our hunting club have a history with ‘Hooks.’ We have had him on camera for at least the past three seasons; we know it was the same deer each year because of an injury to his left front leg that showed up each year,” Gibson said. “At first he carried a nice 8-point rack and in 2017, we noticed a two-inch kicker off the back of one antler. Then last season, he had two nice drop tines but by the time the season opened, he had broken both off from fighting. We at the club decided not to take him last year to see if the drop tines would grow back this season.”

Gibson had decided to let his 14-year-old son, Parker, skip school Friday to see if he could get a chance at a buck. Parker changed his mind at the last minute so Gibson set his alarm with the idea of heading to his Union Parish lease the next morning.

“When the alarm went off, I hit the snooze button several times because I knew it was cold, the bed felt good, I was tired and told my wife, Stacy, I didn’t think I’d go. She may have been tired of me hitting the snooze button so many times keeping her awake and encouraged me to go ahead get up and go,” Gibson chuckled.

By the time he got dressed and headed out, he knew he was running late as daylight was approaching.

“I finally got to my stand on a pipeline, a stand I can slip into pretty easily without any disturbance. I got settled in around 7:00 just as it was starting to break day, turned on my heater in my box stand and was enjoying this frosty morning. Half an hour after getting in the stand, I saw a big deer step out into the pipeline at about 215 yards,” Gibson said. 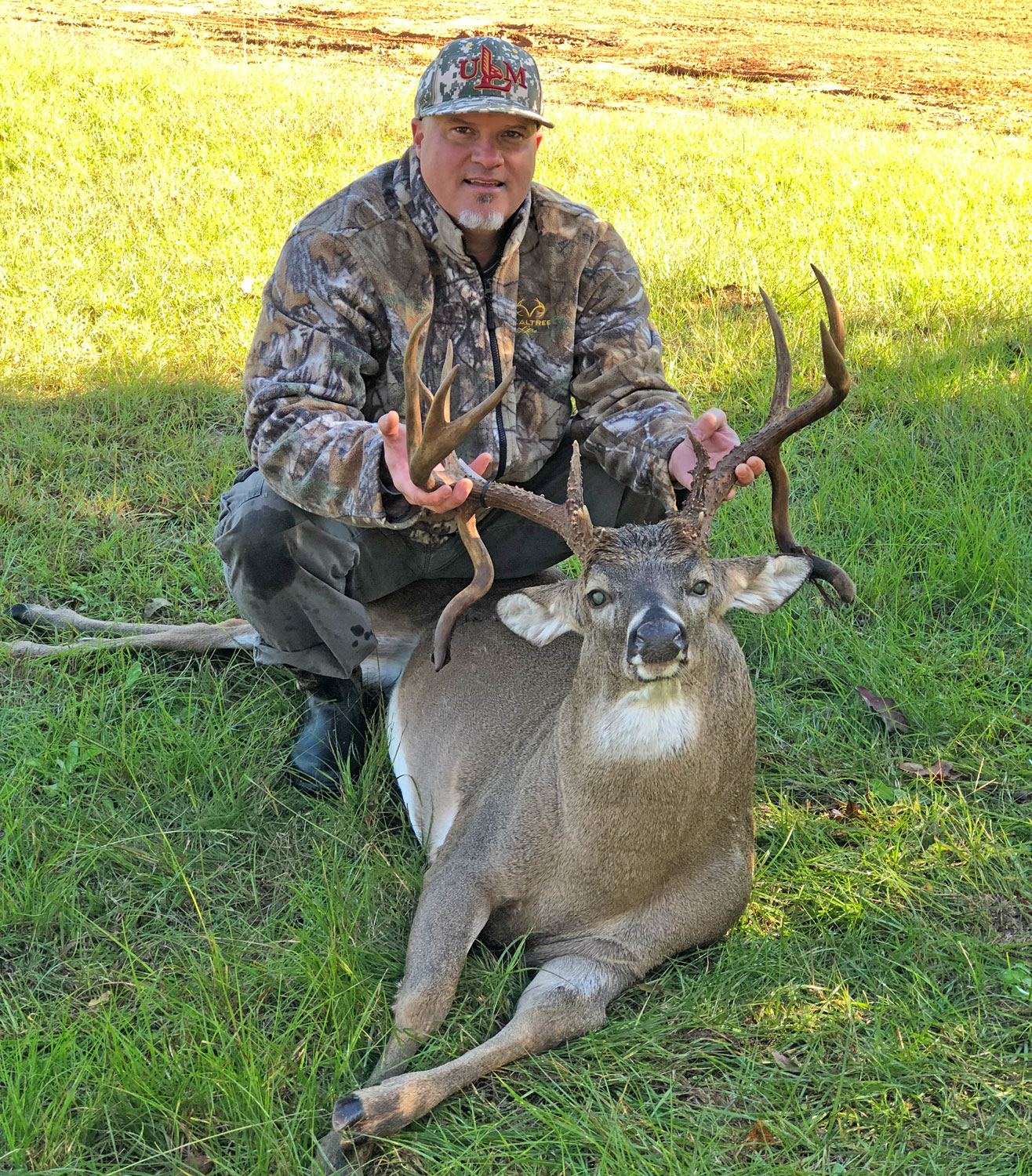 The week before as he sat on the same stand on a foggy morning, he had seen a big deer step out down the line and thought he may have seen a drop tine. By the time he laid aside his binoculars and picked up his rifle, the deer had vanished.

“This time I wasn’t going to make a mistake so instead of picking up my binoculars, I got my rifle, a Remington 7 mag, out the window and noted that the deer was walking directly away from me so I yelled at him. The deer stopped, turned his head and I saw that it was Hooks. However, the only shot I had was the back of his neck or rear end at over 200 yards and I didn’t feel comfortable as the deer turned and kept walking away. I yelled again, he stopped and then started moving pretty fast. I yelled a third time and by now, the deer was quartering a bit and was starting to head for the thicket and his head had already disappeared. I put the scope on his body and squeezed off a shot as the deer disappeared,” Gibson continued.

Walking to the spot where the deer was standing when he shot, Gibson found neither blood nor sign of a hit. Then he saw where fresh dirt was kicked up, walked around a briar patch and saw what he thought at first was a stick but realized it was an antler. Finally, Hooks lay at his feet.

The buck carried 14 points, including the two 11-inch drop tines, had an inside spread of 19 1/8 inches with 26-inch main beams and 4 ½-inch bases. He weighed 210 pounds and based on photos from years past, was determined to be at least 6 ½ years old. 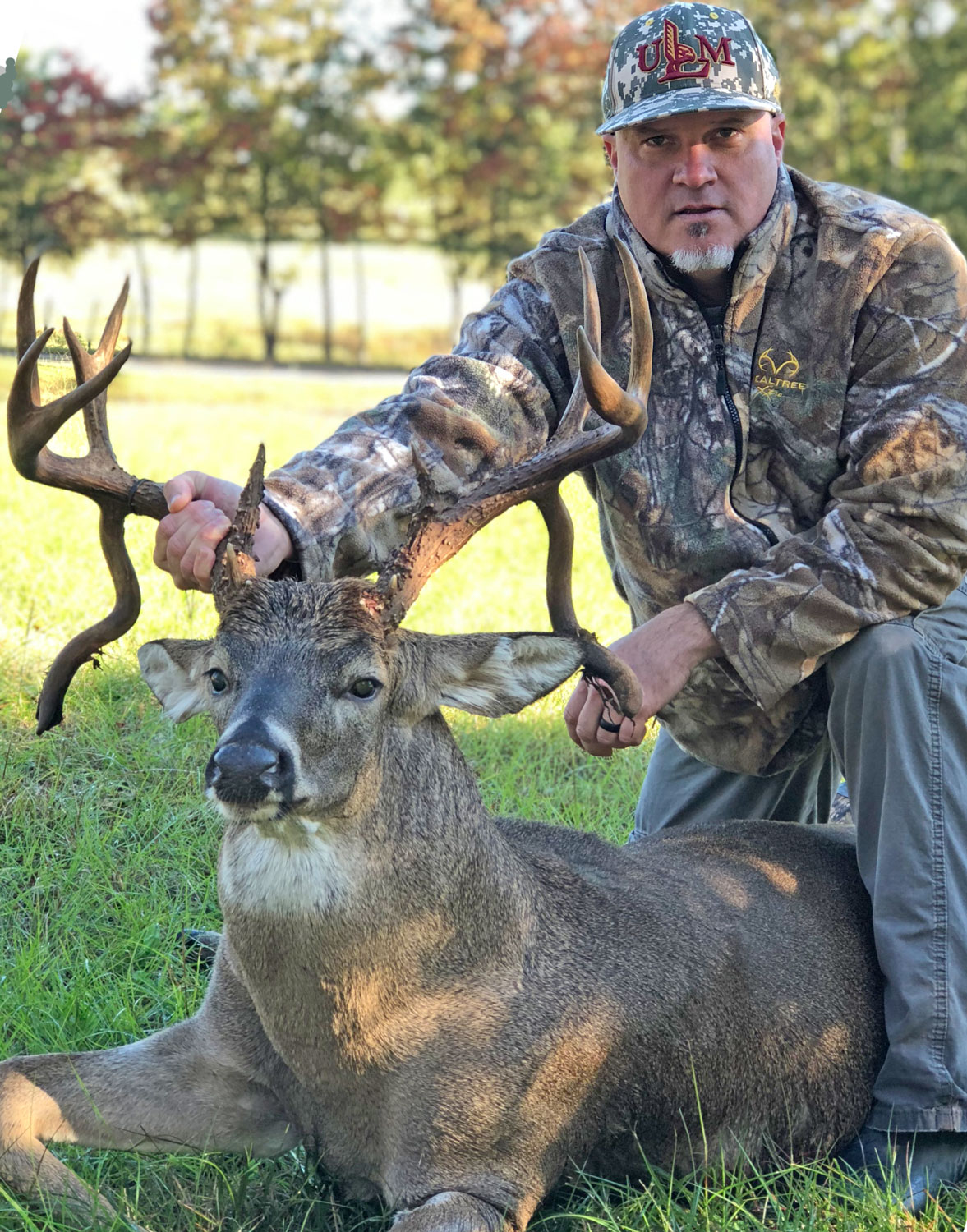