On the afternoon of Tuesday, Oct. 29, Lamonte, who works for Turner Industries, hunted the one acre plot to bring down a big 12-point buck he had been after for the past three seasons.

“I have hunted this deer for the past three years, having him on camera during this period. Actually,” Lamonte said, “I hunted his daddy and his granddaddy for the past 11 years; they all liked to hang out on this small area. This year’s deer and the other two all looked the same so I know they were all from the same bloodline.”

Lamonte said he had been getting plenty of photos on his trail camera of this buck but they were always at night between midnight and just before daylight. 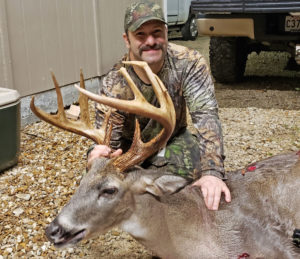 “I had been sort of under the weather for a few days before Tuesday and hadn’t felt like hunting. I decided to go that afternoon even though it was a rather windy day; I was just hoping the wind would cooperate and that I could catch him coming out before dark,” Lamonte said.

The stand from which Lamonte hunts sits in a small oak flat on the corner of the one acre property that butts up to a 400 acre pine thicket.

“I had sat there all afternoon without seeing any deer, which was somewhat usual because I just about always see several deer when I’m on my stand. I hunt out of an Old Man lock-on stand situated high enough, 36 feet above the ground, giving me a better view of the thicket around the stand. I had some corn on the ground to my left in an area I had cleared out well enough for a shot with my bow,” he said.

As the afternoon wore on and daylight was fading, Lamonte’s dream came true when the buck came slipping out of the thicket and he could get glimpses of him browsing along, but the area where he was feeding was thick with yaupon and pines. 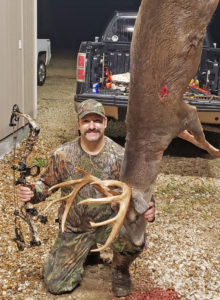 “I could hear him but couldn’t see him but finally just before dark, he came out to nibble on the corn I had out. I shoot a Matthews Helium bow, Carbon Express arrows and Rage Hypodermic 100 grain broadheads. I put the pin on him and released the arrow. I was fortunate to get a spinal shot and he dropped on the spot. He continued to move, so I put two more arrows in him to finish him off,” said Lamonte.

The buck sported 12 points, measured 18 inches inside spread with 24-inch main beams with G2s, G3s and G4s between seven and nine inches each. Bases were 5 inches.

The buck weighed 195 pounds and was measured with 150 ¼ inches of antler.