Wednesday, Dec. 14, was a horrible day, weather-wise, for folks in Louisiana. A massive storm system devastated areas around the state with tornadoes, high winds and torrential rains, injuries and even deaths.

On this day, Ryan Lamonte, a 38-year-old maintenance foreman at the Exxon refinery in Zachary, couldn’t help but think about a big buck on an 82 acre tract in East Baton Rouge Parish, land a friend had purchased a year ago where he is allowed to hunt.

The buck had shown up the previous year near the end of bow season and had started showing up during daylight hours.

“During the last week of the season a year ago, everything was lining up for a good chance at the buck,” Lamonte said. “The wind was right, the moon was right and I knew he was in the area. I really felt like this would be the time I’d be able to connect with the buck. However, all the deer, including this buck seemed to have disappeared. I saw nothing and then I found out that my friend had run rabbit dogs on the property a few days earlier. There went my chance at him last season.”

This season, neighbors on adjoining property had been getting photos of the deer and the daughter of one of the hunters had shot at and missed the big buck during the youth hunt. 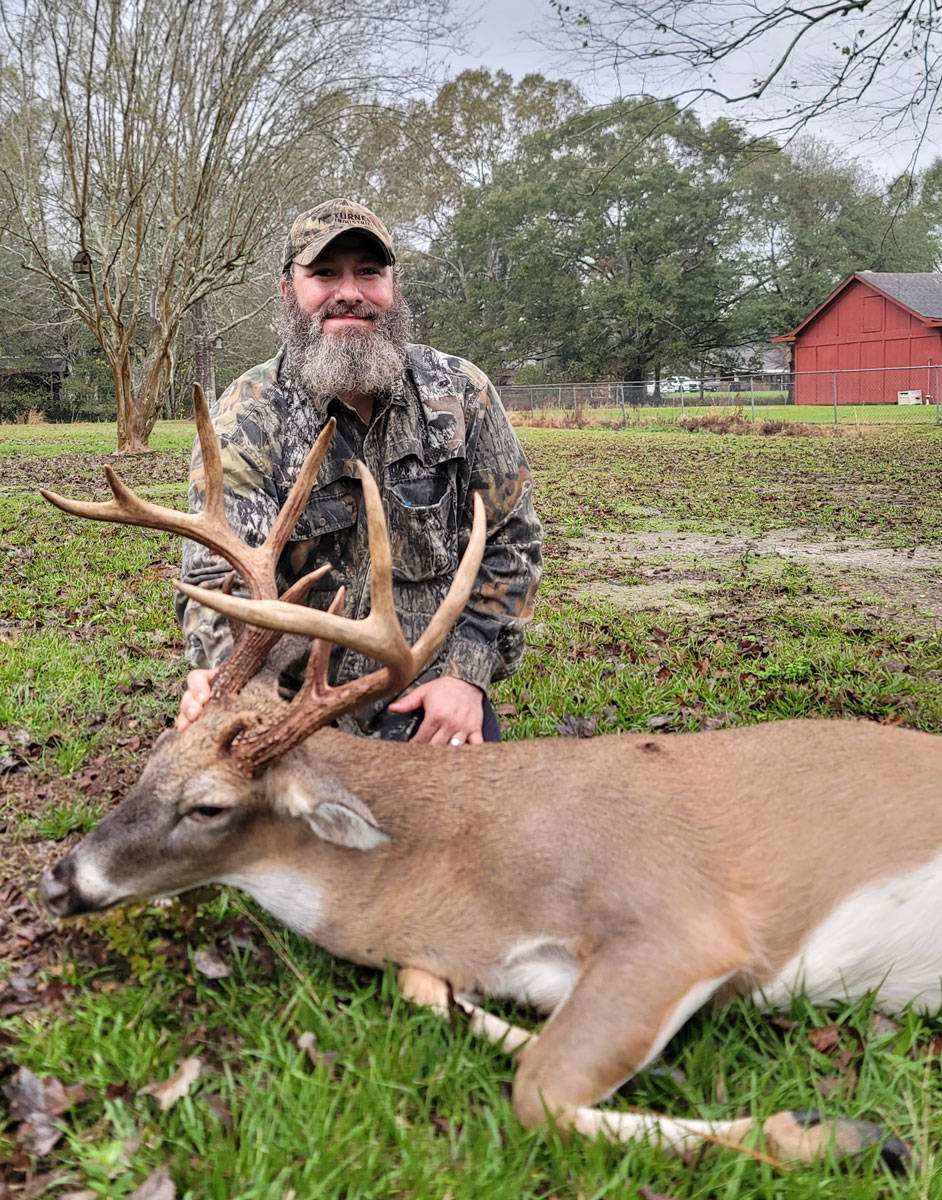 “I woke up Wednesday morning and went on to work,” Lamonte said. “While there, I checked my phone, which is connected to a camera I have on the property, and was dismayed to see the big buck I had been after standing with a doe in front of my camera at 6:25 that morning. Just after seeing the photo, I got a text from my boss saying we were being dismissed from work because of the expected bad weather so I took off and was on my stand by 8:05.”

The stand he was hunting was an old somewhat unstable stand that had been on the property for several years. The wind was picking up and Lamonte became concerned about the stability of the stand and considered getting down. However, a couple of spikes had come out on a shooting lane and were acting jittery and spooky, according to Lamonte.

“I watched the spikes acting nervous and then a doe, one I hoped the big buck had been following, came out at 150 yards and started eating the corn I had scattered,” he said. “A few minutes later, I saw the nose of another deer come out, then I saw antlers and knew it was the one I was after. I put my rifle, a Savage .270 bolt action, out the window, the buck was standing broadside and when I hit the trigger, he dropped on the spot.”

The buck had a rack of 10 points with a split brow tine, measured 18 1/8 inches of inside spread with five inch bases and long main beams. Estimated to weigh 210 pounds and be 5 ½ years old, the buck was scored three different times with an identical score of 154 inches.

The cottontail rabbit is the most common wild rabbit in North America. […]