Shooting a big buck was the easiest part of the experience 23-year-old Monroe resident Gunner Ruddell had in laying claim to his Winn Parish 11-point buck. Retrieving it was a whole different and tough experience.

Ruddell, a student in Construction at the University of Louisiana Monroe is a new member of 4000 acre Beech Creek Hunting Club, having joined this year.

“I woke up early on the morning of Nov. 26,” Ruddell said. “It was raining but I knew I had planned to hunt on the club that morning so I left Monroe, drove the hour to the club and was sitting in my box stand at 4:30.”

From the vantage point of his box stand, Ruddell can see a tract of hardwoods to his left and to his right, a pine stand with an accompanying thicket.

“I took my dog along with me and had him in the stand and to pass the time before daylight, I was playing on my phone while the dog slept on the seat beside me,” he said. “Along about 8:00 I watched five does come out into the clearing out front but noticed that one of them appeared very nervous and kept looking back. I felt maybe a buck was following her so I put my Remington X-bolt 300 mag out the window and also picked up my binoculars.”

Seeing movement in the direction the doe was looking, Ruddell watched a big buck step out, one that had never been seen on cameras on the property.

“When I realized I was looking at the biggest buck I had ever seen I really got nervous, so I dropped my binoculars on the seat, woke the dog up, and got my scope on the buck as he was walking across the clearing,” Ruddell said. “I knew I had to stop him before he got into the hardwoods so I sort of hollered, he stopped and I shot.” 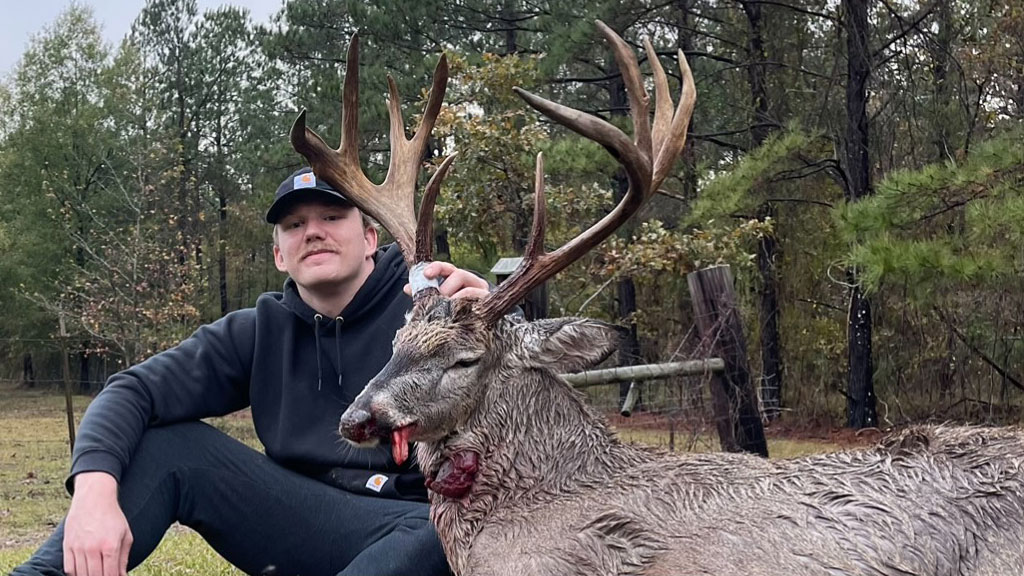 Ruddell first called his dad to tell him what had happened and since it was raining, he decided to sit tight for half an hour before checking on his buck.

“I called my cousin to come help me search, we found a little blood, then jumped the buck and were able to track it to a creek,” he said. “We marked the spot where we last found blood, backed out and my cousin called a friend, Jody Rushing, who has three top notch blood trailing dogs. Within 20 minutes after he got there, the dogs picked up the trail and tracked the deer for over 700 yards along the creek. The dogs bayed him and another shot finished him off.”

Hauling the buck out

Now came the not-so-fun task of getting this 230-pound buck back to the truck, a distance of over 700 yards. 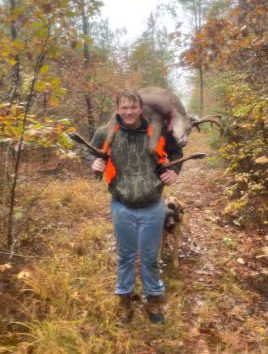 “My cousin had watched a YouTube video on how to make a backpack to haul out a big buck,” Ruddell said. “We field dressed him, put the backpack together, I got it on my back and we headed out. I was able to cover all but about 50 yards when my back and legs just gave out.”

The buck, assumed to be about 5 ½ years old and weighing 230 pounds before being field dressed, sported a rack of 11 points with an inside spread of 19 inches.