The second-largest wahoo ever taken out of Louisiana waters was boated on Friday, March 20, by a Florida angler fishing on a Venice-based charterboat.

Brian Cueto of Vero Beach, Fla., was on the rod when a 129-pound wahoo hit a chunk of bait being drifted for yellowfin tuna by Capt. Gray Long of Go Long Charters.

“We were chunking for yellowfins near the Horseshoe, the East Lump,” Long said. “It was our first drift of the day. I had marked a lot of fish and turned the boat sideways to drift when the fish hit. 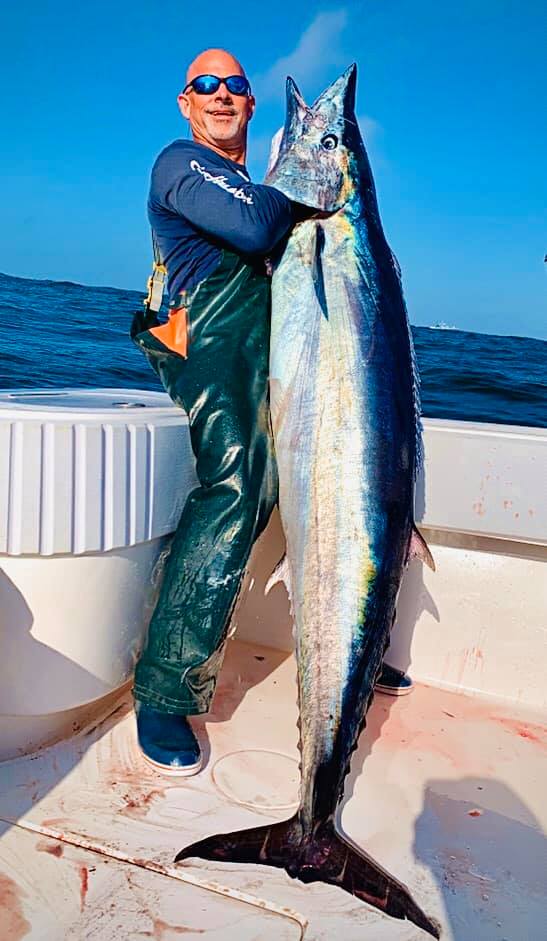 “When he first hit, he screamed off so much line I thought it was a wahoo, but then it settled in and I thought he was a tuna — until he popped up in the prop wash and we saw him and we really went crazy.

“I try to underestimate for the customers. I said he was about 95 pounds. One of the guys we had on that day was a diver, and he said the fish was 115.”

Long was fishing in about 230 feet of water, 28 miles offshore. He estimated that the bait was between 60 and 100 feet deep when the big wahoo hit.

“We had him on a Tiagra (reel) with 100-pound braid and an 80-pound fluorocarbon leader — what we usually fish for tuna. Wahoo will usually cut the fluorocarbon, but he had the hook in the corner of his mouth.”

After about 30 minutes, Cueto wrestled the wahoo to the side of the boat.

“We tried to pull him up with one gaff, but my deckhand, Jacob Winfield, had to put a second gaff in him, and we pulled him up over the gunwales,” Long said.

The big wahoo was 76 inches long, fork length, and 35 inches in girth. At 129 pounds, it was 10 pounds lighter than the state-record fish, a 139.25-pound wahoo caught in April 1976 by Myron Fischer in West Delta Block 153. According to the Louisiana Outdoor Writers Association’s fishing record book, Cueto’s fish will move into the No. 2 spot, ahead of a 124.5-pound fish caught in April 1974.

“There have been some wahoo all season around the Horseshoe,” Long said. “We usually catch ‘em trolling for king mackerel for bait. Another boat caught one the same day chunking, a 100-pounder. On any other day, that would have been the biggest.”