There’s more to catching trout in the surf than showing up and walking into the water. Here are some tips from Sammy Romano, who has perfected the tactics.

On topwater plugs, Romano adds an extra split ring between the ring already on the plug and the hook, a trick he he learned from retired U.S. Fish & Wildlife Service game warden Bill Mellor.

The extra ring makes it difficult for a fish to get enough leverage to twist off the hook.

Nicholas “Frog” Cioffe and Romano also replace the hooks on all their plugs with Gamakatsu hooks, which are stronger and sharper than the hooks that come standard on plugs.

And, more importantly for trout fishing, Gamakatsu hooks have larger gaps, which results in more hookups with fish that just slap at the lure. This is useful for all fishing, not just surf fishing.

Later in the day, after the sun rises, Romano and Cioffe form a tag team, with one continuing to fish a topwater lure while the other shifts to a suspending lure. 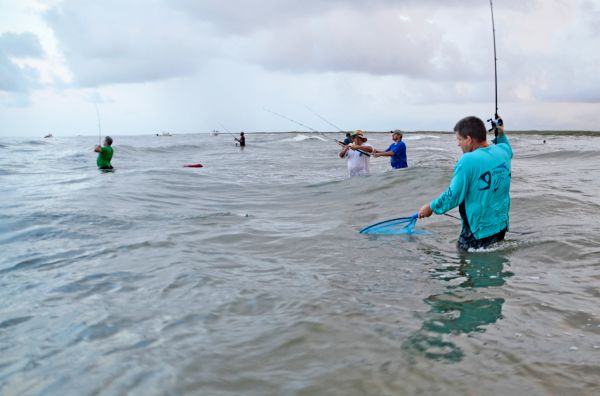 When a trout slaps at the topwater but doesn’t take it, the suspending bait will be cast to the same spot, and 60 to 70 percent of the time a hookup will result.

Look for the suds produced by breaking waves, Romano coached, and throw topwater lures close to the white water.

With sinkers or suspenders, cast into the suds.

“Sandbars change every winter,” Romano said. “One of my early season tasks is to walk everything walkable to see the lay of the bars.

“Knowing where the bars and troughs are is the key to understanding fish movement. Trout follow a feature.”

Look for the best water

The best color is “trout green,” or green water that is not too clear. Romano likes to be able to see his bait 1 to 2 feet underwater.

“Move up and down the beach to find the cleanest water,” he said. “If I can’t find clear water, I just fish in muddy water.”

Stay on your toes. Don’t just blindly and repetitively cast to the same spot. Watch for any bait movement and cast into it immediately.

Watch for feeding slicks, defined as patches of water calmed by the oils released from the bodies of prey fish being attacked by trout. But remember that the fish might be quite a ways up-current from the slick.

Surf fisherman have an advantage in that, with the beach as a barrier, fish are usually up or down the beach, reducing the area that to be searched.

And, being that they are physically in the water rather than in a boat, surf fishermen are in constant touch with the direction of current flow.