There are a few things that can wreck your chances of success when you head to the beach to surf fish. Here are eight things these surf anglers have on their “what not to do” list:

Don’t wade past the fish

Very early in the morning, fish in the first trough located next to the beach, even though it is often only 1 to 2 feet deep. People have a tendency to believe that farther out is better and will wade past the fish.

Don’t get on top of other fishermen. Be respectful. This includes fishermen in boats who often get shallow to fish the surf zone.

“If you crowd a boater, he gets P.O.d, cranks up his big motor and tears out, ruining it for everybody,” Sammy Romano said.

Don’t be a fence post stuck in one place 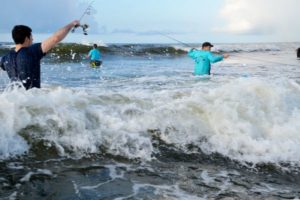 You have to move to locate fish; they won’t come to you.

“Fifteen minutes is a long time to be in one spot,” Nicholas “Frog” Cioffe said. “Move until you find fish; then stop and fish it out before continuing to move.”

You can get in deep water or get in trouble with hooks. So take a buddy.

Many fishermen were still arriving as Romano, Cioffe and Cabot Corso were heading home with their solid catch. The best bite usually occurs with the very first light in the morning.

“Don’t use too much hardware,” Romano said. “I see too many snap swivels and steel leaders. Trout don’t like jewelry.”

“You are not catfishing,” Romano explained.

Don’t have blinders on

Look around. Be observant. Watch for feeding birds and bait movement. Study other anglers’ success. Look for differences in wave action that indicate something is different.