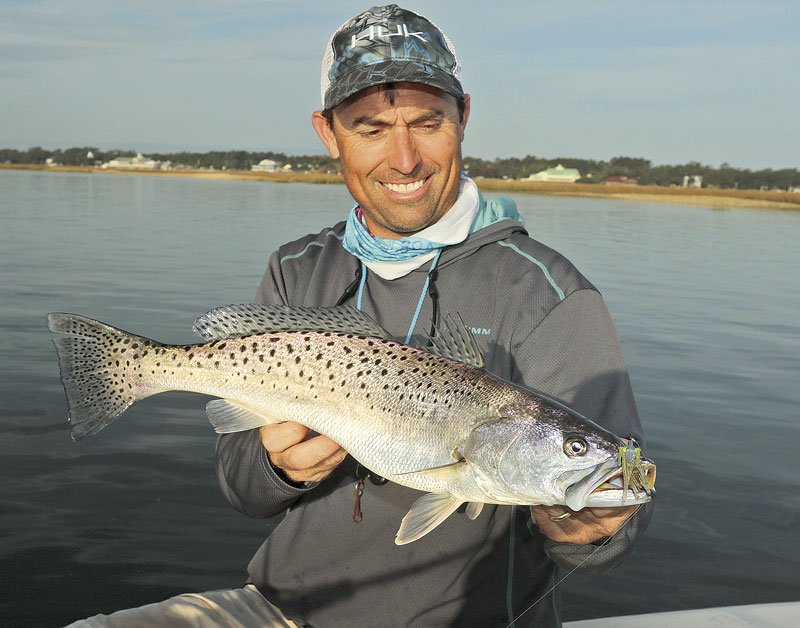 Speckled trout are an angler’s favorite wherever they swim

Speckled trout, Cynoscion nebulosus, are inshore gamefish that are popular among recreational anglers along the Gulf Coast and the eastern seaboard. They are hearty fighters, and most anglers agree that they are very tasty.

These fish have elongated, streamlined bodies. Their lower jaws extend beyond the upper jaws. They are usually silvery gray to green and sometimes have blue and purple highlights on their backs. Their bellies are usually white. They have flat, unforked tails with black edges. Speckled trout have two sharp teeth at the top of their mouths, which are usually yellow on the inside.

Speckled trout have long dorsal fins, which are made up of two sections. The long, rear section is soft and pliable. A deep notch separates this from the front section, which is spiny and sharp.

They are members of the Sciaenid family, which includes weakfish, sand seatrout, red drum and black drum. Like other members of that family, they have a lateral line that runs down the middle of their body all the way to the tail.

The speckled trout’s range is Cape Cod to Florida and the entire Gulf of Mexico. They live along inshore waterways and from the shallows out to 30 feet deep in the Gulf. They are a schooling species for the most part, but the very large ones travel in smaller groups. Females can live up to 10 years in the wild, but males rarely reach 5 years old.

Anglers catch these fish near sea grass and shellfish banks at a variety of depths. Live shrimp and a variety of baitfish are attractive forage for speckled trout, but anglers looking for a bigger challenge love catching them on a variety of artificial lures. Topwater “walk-the-dog” lures are popular choices. Plastic shrimp under popping corks are surefire ways of finding them, and swimbaits fished on jigheads throughout the water column are very effective.

These fish, while tough fighters on hook-and-line, are known as some of the most-delicate fish among their inshore cousins. They are prone to large fish kills during periods of extreme cold weather and are less tolerant of fresh or even brackish water than most other members of the drum family.

Nicknames include spotted seatrout, specks, spotted weakfish, yellowmouth, winter trout and trout. They are infrequently known as truite gris in some Cajun circles. Bigger ones are often called gators or gator trout.

BIG speckled trout on this bridge

Every spring and fall, the train trestle that crosses eastern Lake Pontchartrain produces thousands and thousands of speckled trout. […]

Capt. Chris Mowad of Whoo Dat Sportfishing talks about how he’ll be targeting cobia in Grand Isle in November. […]

About Brian Cope 84 Articles
Brian Cope of Edisto Island, S.C., is a retired Air Force combat communications technician. He has a B.A. in English Literature from the University of South Carolina and has been writing about the outdoors since 2006. He’s spent half his life hunting and fishing. The rest, he said, has been wasted.