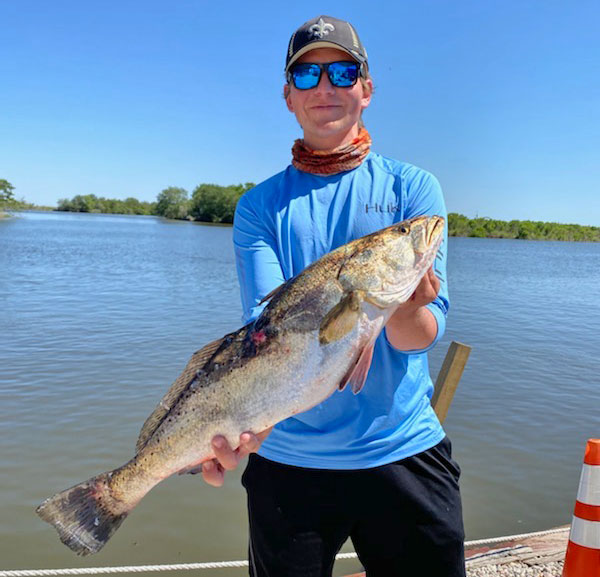 Driving from Slidell to Hopedale, the scenery change reveals the challenges we face in Louisiana. The hour-long drive early in the morning along the canals paints a picture of the tenacity of folks determined to thrive living close to the marsh. I know I’m entering a special place and can’t wait to get on the water.

Well, each trip I’m learning and know I have a lot more time to put in. Having made the trip short of a dozen times, I’ve made many mistakes learning all kinds of lessons along the way. Luckily, Hopedale has great marinas like Campos and Hopedale for hopeful anglers to get live shrimp, tackle, gas and other fishing necessities.

On Thursday, May 7, at about 6:30 a.m., me and my fishing buddy, Chase, launched from the two kayak slips out of Hopedale Marina. We were soon faced with a headwind pushing current against our start to get out to the MRGO rocks. Once anchored up, we quickly found smaller specs in the right-side corner of the rocks.

After picking through bunches of shrimp-eating specks between 6 and 10 inches long, I was resigned that there weren’t any decent-sized trout biting that day, at least for me. We picked up a few decent sheepshead for eating and released a few small rat reds as well.

Around 10:30, after losing two popping corks and other tackle to the rocks. I reached into my bait bucket and picked out what must’ve been the smallest shrimp in there and made my next cast. The cork hit the water, and no sooner than it had landed 5 feet off the rocks, it was taken under by what I thought was the keeper-sized redfish we’d been looking for.

After a nice battle and a good amount of drag taken by the fish, I was absolutely shocked to see it was not a redfish, but the biggest speckled trout I’d ever seen. With no net, I tried to remain as calm as possible and grab the fish by the gills to get it into the kayak. I couldn’t believe what I was seeing; it wasn’t a red, but a monster speck. No angling finesse or technique, just chaos at the surface, pure elation mixed at the same time with the dread of losing this monster.

Initially, after calming down and looking at my prize, I thought this was a solid 5- or 6-pound trout, having never personally caught a speckled trout weighing more than 3. But when we got back to Hopedale Marina, some fellow anglers with a scale showed me it was in fact 8 1/2 pounds. It had a reddish scar on its right side and a little deformation from what I was told afterward at Hopedale Marina was a gill net.

Memory of a lifetime

I was excited, but I had no idea I’d just caught what others told me was a “fish of a lifetime.” I couldn’t have been more grateful for this rare and incredible experience: the other anglers that celebrated this catch with me and the great marinas like Campos and Hopedale that provided bait and supplies.The fish was 27 inches long, with a 15-inch girth. My plan is to get a mount honoring the fish and to cherish this memory for the rest of my life.

I also truly don’t want this to polarize folks in the fishing community. My inexperience and excitement all contributed to keeping this beautiful speckled trout. In the future, I can truly appreciate an exceptional encounter with a mature and outsized fish and hopefully make an experienced sportsman’s decision whether to harvest.

The Sportsman is looking for photos, videos and reports from anglers and hunters across the state.

We value your input and want to see what you’re doing — and how you’re doing it. Here’s how to become part of our Sportsman community … it’s easy.

Janie and Chris Murphey are making their mark on kayak fishing with both regularly making appearances in the winners’ circle. […]