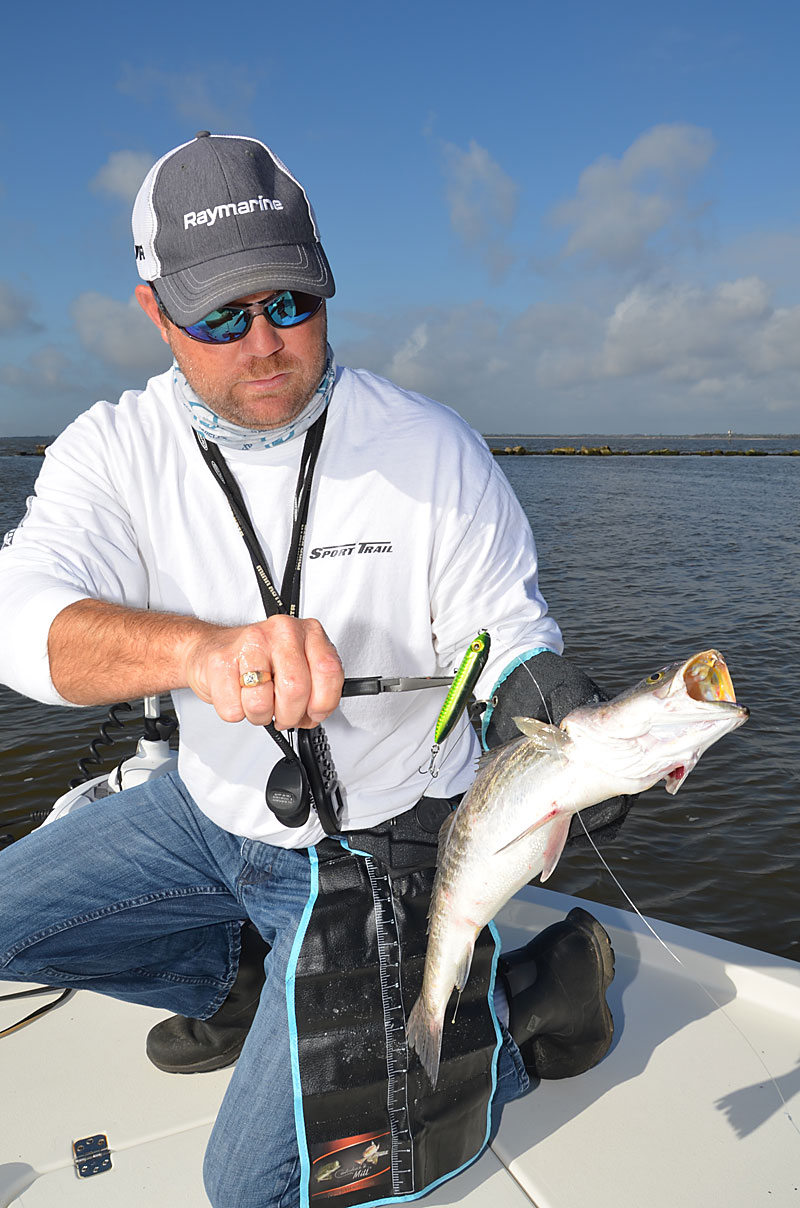 Hungry specks will jump on topwater plugs in November; they’re hungry enough to eat anything that moves, and these baits move just right.

Pinned into a pocket along the shoreline, the mullet never stood a chance, as they futilely leaped for safety. They couldn’t escape the vicious, toothy predators slashing at them from all sides.

With black/silver and green/silver Top Dogs tied on, we cast into the maelstrom from an extreme distance. Our hefty topwater baits splashed down in the strike zone and barely twitched before they disappeared in a frothy storm of exploding spray as we both hooked up with speckled trout in the 4- to 6-pound class.

“It sure will make the hair stand up on the back of your head when you get a big hit on top from a speckled trout,” said guide Scott Simpson of Impulsive Charters in Long Beach, Miss. “It’s an explosive strike that will bring you out of your shoes if you aren’t paying attention.”

“For big trout, I like throwing topwater baits,” said Ronnie Daniels with Fisher-Man Guide Services in Pass Christian, Miss. “Anglers can catch big trout on many baits, but topwaters tend to draw strikes from larger fish. They have larger profiles, so smaller fish won’t hit them as much.”

To find big trout that might hit a topwater bait, first look for what specks want to eat. Until a trout reaches about 3 pounds, it mostly eats shrimp. Of course, no trout will resist a live shrimp swimming enticingly past its nose, but giant trout want a big meal without expending too much energy to catch it. They want fishy meals and look for mullet, croaker or menhaden, aka pogies, and other finned prey. A 5-pound trout can easily gulp down a 12-inch mullet and still smack a 6-inch topwater bait with vengeance. Imagine what a 10-pounder can swallow.

“Topwater baits are great to throw when trout prey upon mullets,” said Charlie Thomason of Bayou Charters and Silver Sides Lodges in Hopedale. “Speckled trout know that mullet hang on the top of the water. When you throw anything that kind of looks like a mullet, a trout will attack it.”

When looking for big trout, first find the prey, particularly agitated or nervous baitfish. Then, offer the trout something that looks like the prey. Many topwater enticements closely resemble mullet, which often thrust their heads above the water. To a hungry trout, a struggling mullet looks like fillet mignon.

“Go where the bait is,” said Erik Rue with Calcasieu Charter Service in Lake Charles. “Bigger trout survive more on mullet, pogies, pinfish and similar prey. Look for big wads of mullet — that’s where the big trout will be — and throw topwaters at them. A speckled trout is a very aggressive fish, especially around other trout.”

Diving birds can mean schooling trout feeding near the surface, although monster specks normally hunt alone or with just a few of their large brethren. Feeding trout also make slicks on the water. When feeding on oily baitfish, snaggle-toothed specks rip their hapless prey apart. The fish oil floats to the surface, forming a sheen that looks a bit like gasoline spilled in the water. For the best results, look for small, emerging slicks because these indicate trout actively feeding on oily baitfish. Since slicks drift with the wind or tides, determine the direction of the flow and get ahead of the slick to intercept the fish.

Fishermen can throw many different floating lures, but most saltwater specialists like “walking” or “walk-the-dog” baits.” With brisk wrist flicks of the rod, make the bait “walk” with a scintillating, side-to-side action that mimics a wounded baitfish. Tie walking baits with a loop knot rather than cinch a knot down on the eye of the hook or use a split ring so the bait can zigzag more freely.

“Mullet spend a lot of time on the surface, and big trout key on that,” Daniels said. “Trout have a predatory instinct. When looking at a topwater bait, they see a profile that resembles a larger prey fish like a mullet. An injured fish is typically going to be up near the surface, swimming with an erratic motion, not in a straight line. A walk-the-dog type bait imitates that struggling baitfish action.”

Most people work walking baits with a constant, zig-zag motion, but the biggest trout might want something different. Try working a bait several feet, then pause so it sits motionless a few seconds. Try different retrieves and speeds to see what works best that day.

“When working a topwater bait, find out what the fish want,” Daniels said. “Sometimes, they want it run fairly quickly, with almost non-stop movement. Some days, fish are a little more sluggish and want a slower bait, especially when the water turns a little cooler. When working a walking bait, sometimes I make it wobble widely from side to side and work it slower. Sometimes, I pause frequently and let it sit still for a second or two. I experiment with different retrieves and colors to find out what they want. My all-time favorite color is a bone with a slight silver pattern to it.”

Heavy, large-profile baits can be cast long distances, essential for catching giant specks. Strikes from the biggest trout usually occur at the extreme end of a cast. That also makes these lures excellent search baits since they cover so much water.

“Get the bait as far away from the boat as possible and keep quiet,” Rue said. “The person who can cast the farthest will probably get the most bites and biggest fish. Use the wind to make longer casts and for drifting into position. Don’t overuse the trolling motor. People need to be in stealth mode to catch bigger trout. It’s almost like hunting, to an extent.”

Anglers can also fish popping plugs, which displace water with curved blades or noses. When jerked, they create quite a surface commotion. Work poppers slowly. Cast one to a good spot and let it rest a while, then pop it. Keep repeating this retrieve. These baits work best for eliciting opportunity strikes from non-aggressive feeders.

Big fish will often follow a lure quite a distance without striking. Most people who spot a fish would naturally slow down or pause the retrieve to let the fish catch up, but a trout doesn’t need help running down prey. A baitfish fleeing for its life with a gnarly-toothed speck hot on its tail kicks in turbo mode and starts swimming erratically. Nothing infuriates a hungry predator more than “fast” food trying to get away. Speeding up your retrieve could provoke incredibly violent strikes.

When a fish blasts a topwater lure, resist the temptation to set the hook. Trout don’t always connect when attacking, particularly when chasing a fast-moving lure. Yanking the rod prematurely could pull the lure out of a fish’s mouth. Wait to feel the fish on the line. If the speck doesn’t make solid contact the first time, keep moving the bait. That fish didn’t go away; it might hit again, or perhaps another spotted predator will take a shot.

“Working a topwater bait requires patience,” Simpson said. “I’ve had fish hit a topwater seven or eight times on a single cast. When a big trout blows up on a topwater bait, it sometimes knocks it completely out of the water. When a fish strikes and misses, I pause the bait so the fish thinks it wounded or stunned the baitfish. After 2 or 3 seconds, I start twitching it again and work it a few more feet. Then, I might pause it again. That might entice another strike.”

Anglers can fish topwaters around any shallow cover, including marshy shorelines, jetties, sandbars, oyster beds, artificial reefs, sunken wrecks and grass flats. They can even work around structure in deeper water, including bridge pilings, docks, vertical bulkheads and similar places because specks and baitfish both commonly suspend near the surface.

“Throwing topwater baits is not only a very effective way to fish for big trout, but in my opinion, the most enjoyable way,” Daniels said. “Topwater fishing is the only form of fishing where missing a fish is just as exciting as catching one.”

Fishing large topwaters takes patience and perseverance, but any cast could produce the speck of a lifetime. Just make it a long cast to stay on top of the action.

For information about Scott Simpson with Impulsive Charters in Long Beach, Miss., call 228-669-6204 or visit www.captainscottsimpson.com.

For information about Charlie Thomason of Bayou Charters and Silver Sides Lodges in Hopedale, La., call 504-278-3474 or visit captaincharlie.com.

About John N. Felsher 6 Articles
Born in New Orleans, John N. Felsher grew up in Slidell, La. He worked as the outdoors editor for several Louisiana newspapers including the Lafayette Daily Advertiser and Lake Charles American Press. An avid sportsman, he’s a full-time professional freelance writer and photographer with more than 3,300 bylines in more than 160 different magazines. He also hosts an outdoors tips show for WAVH FM Talk 106.5 radio station in Mobile, Ala. Contact him at j.felsher@hotmail.com or through Facebook.