Being a fan of sleep, I’m also a fan of Daylight Saving Time, since it allows me a few extra winks before getting up and getting on the water before the sun has climbed above the horizon.

This year, Daylight Saving Time comes to a close on Nov. 7, which is nice, because it’s the latest date that the nation can move to Standard Time under current regulations. It’s been my lifelong wish that we’d end this time-changing silliness and stick with DST year-round, but until our politicians see the light, we’ll have to see it ourselves earlier during the winter months.

In New Orleans, sunrise will occur on Nov. 6 at 7:17 a.m., and it’s even later for anglers in the western part of the state. In Lake Charles, for instance, sunrise that morning is 7:30.

Regardless, the extra sleep is only one reason Nov. 1-6 is likely to be my favorite fishing week of the year. The others include the typically delightful weather and the fact that fall speckled trout fishing is so easy even a caveman can do it.

Speckled trout are cunning, clever and notoriously temperamental, and that’s why we love them, but they have one weakness that, for them, is often fatal. Namely, speckled trout love shrimp the way 12-year-old boys love pizza.

And it’s certainly not a coincidence that specks move back into the marshes during the same season that white shrimp are emerging from the backwaters. The fish get remarkably stupid as they binge-eat their favorite crustaceans, hoping to put on as much fat as possible before temperatures drop and the shrimp move outside and out of reach to complete their life cycle.

Anything that looks remotely like a shrimp will get inhaled if the water is clear and moving and there are any specks around. That’s particularly true in one certain scenario. 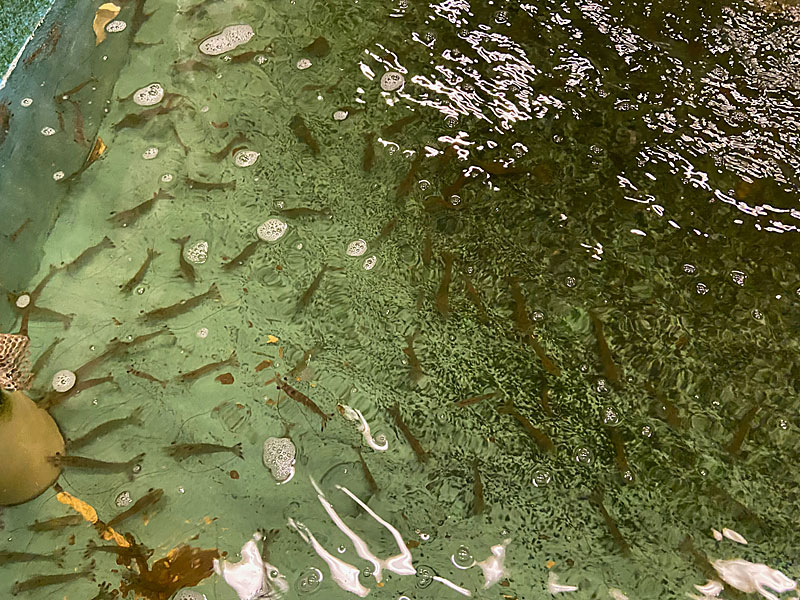 This time of year, I try to plan all my trips to coincide with a falling tide. Water pulling out of the marshes yanks white shrimp with it, and specks wait alongside the conveyor belt for the food to be brought to them.

Specks can set up absolutely anywhere to enjoy the feast, but the most predictable locations are at the mouths of major bayous, where they intersect with large lakes and bays. Because it’s constricted, the water flowing through the bayou itself will be moving at a rapid pace relative to that in the lake or bay. But once it meets the bigger body of water, it becomes diffused, and the bait tumbles and twists with the vertical and horizontal eddies. That’s when the trout swoop in for their easy meals.

Often, the trout push the shrimp to the surface, attracting the attention of sea gulls, but even if no birds are present, wise anglers check the mouths of major bayous on falling tides in the fall.

Depending on depth, my favorite setups to target these fish are a Versamaxx Bolt Pro-Series or Knocker cork above an H&H TKO Shrimp or a Matrix Shad teamed with a 3/8-ounce Deathgrip jighead. Colors for each depend on water clarity, but if it’s good, I go with red ice on the TKO and shrimp creole on the Matrix Shad.

This phenomenon can occur throughout the fall, but it’s most predictable in October and November, when the first cool fronts with a little bit of muscle push through the region.

Autumn weather, extra sleep and non-stop speckled trout action. Yep, it’s almost a cinch that Nov. 1-6 will be my favorite fishing week of the year.

Amberjack fishing is not for the faint of heart

Nicknamed “reef donkeys” for their size and power, amberjack like to stay around any hard structure in water at least 150 feet deep. […]

LSU Senior Heath Pinell makes off with bass like a “Bandit”

Heath Pinell has fished since he was a diapered toddler in a boat. Now he is a veteran member of the LSU Bass Fishing Team. […]

It took four to five months to design and tweak the lure, but today the Ike’s Mini Flip Jig is a favorite among bass fishermen. […]