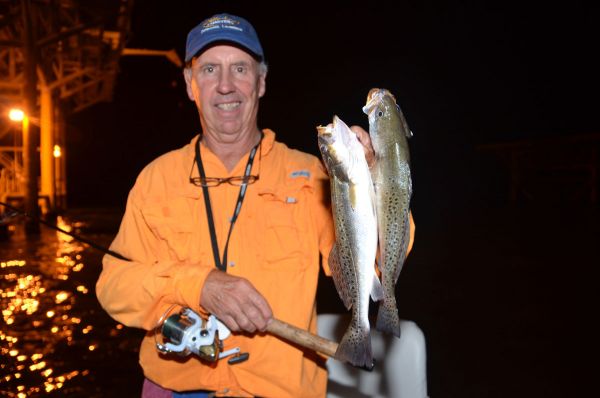 When the crowds have left for home and the fish are ready to plaster their baits. Here’s how they do it.

Everything else in Delacroix was dead quiet. All the sports had gone home and were digesting their supper.

A lot of the commercial guys were already preparing for bed; since Katrina, most live elsewhere and have long drives to their boats before their usual predawn start.

But we were going fishing.

It was still hot at 7 p.m., but not blistering hot. That was the whole idea for this gig — beat the heat.

But he likes it for more than cooler temperatures.

“During the day, you are often fishing in crowds — often obnoxious crowds,” Toledano said, trying his best to be tactful. “It’s peaceful in a way that you don’t get during the day. Plus the water is more beautiful. It’s reflective in natural and artificial lights.”

But not every night is the same.

“Try to pick a night with a full moon,” Toledano coached. “Fish feed more then. The second best choice is to have whatever moon there is either overhead or underfoot, not on the horizon.”

Toledano began chartering from Delacroix in 2007, but he seldom does night charters.

“It’s not the best time for novices — safety, moving around in the boat and casting accuracy,” he explained.

But he does accept them.

“Most people don’t know about them,” Toledano grinned. “But once they do it, they are hooked.”

This trip wasn’t a charter; it was a trip with friends Farley Dennis and Kelly LeBouef, both of whom occasionally double as Toledano’s deck hands on charter trips.

As the captain piloted the boat out Bayou Terre aux Boeufs, he explained that we would be fishing “outside,” which he defined as Black Bay, Breton Sound and Lake Fortuna, as opposed to the protected interior marshes and nearby lakes.

Generally speaking, Toledano explained, speckled trout are found outside from April to September. In the late summer and fall, hurricanes or cold fronts can speed up or delay their movement back inside.

The boat’s livewell was generously stocked with live shrimp, a staple for warm-weather speckled trout fishing out of Hopedale and Delacroix.

But, Toledano added, artificials can work as well as live bait for night fishing. Any paddletail soft-plastic lure in glow color is good, as are Tsunami swim baits and Vudu Shrimp in brown.

Our first stop was a big, well-lighted platform in Black Bay called the Compressor. But the men dropped anchor near a small satellite platform out beyond the direct reach of the platform’s lights.

The small platform had what Toledano called “a good bottom,” which translated as having a shell pad around it. In the old days, before shell dredging in Louisiana was banned, oil companies often laid down a dense pad of clam shells to set the drilling barge on before beginning to drill a well.

“There are no shells around the big platform,” he explained quietly, “but sometimes after dark you get good bait activity under its lights.”

Dennis and LeBoeuf baited Carolina rigs with live shrimp to fish on the bottom. Toledano also used a shrimp, but his was set 3 feet beneath a popping cork.

“This is transition time between day and night right now,” Toledano explained “It’s also near the end of a falling tide. The tide we will be fishing in tonight will be a rising tide.”

Dennis caught the first fish, a keeper channel mullet (aka kingfish), giving Toledano cause to rib Dennis about trash fish being attracted to him.

The men were fishing casually, giving the impression that they were more or less killing time until total darkness set in.

Fifteen minutes and one gafftop catfish later, Toledano suggested picking up the anchor and drifting through the big platform’s lights.

But the men saw no bait or fish feeding activity during the drift.

“This platform doesn’t have the shells to hold fish, so we need to see some bait,” Toledano said.

The words were no more than out of his mouth when Dennis called his attention to a school of small pogies flipping on the water’s surface.

Toledano immediately nailed the first speck, prompting Dennis and LeBoeuf to switch to popping corks while Toledano shifted the boat to drift the other side of the platform.

“Sometimes the trout are right under the platform’s lights,” he explained as he positioned the boat. “But often, they are in the shadows at the edge of the lights’ reach.”

This drift produced only one bite, finalizing a decision to move elsewhere.

It was fully dark now, and what I saw in the twilight earlier made the run creepy. The whole area was littered with unlighted well guards and satellite platforms, prompting the question, “How can you run safely in the dark?”

“Its best, of course, if you have radar,” Toledano replied. “Or can run known GPS routes. You can also run ‘shadows.’ That’s when you point the boat toward a large, well-lit platform; any dark shadow that intrudes on the lights means that some obstruction is ahead.”

Toledano ran the boat to the closest heavily lighted platform, which was near Stone Island.

“Some people call it the trashpile platform because it is close to the ‘Trashpile,’ a spot with a lot of iron on the bottom,” he said.

Small speckled trout were smacking baitfish silly directly under the platform’s light. The game was soon on, and the moonless night was beautiful.

A gentle breeze caressed the skin. There were no other boats to contend with, and the low hum from engines on the platform was lulling.

Then a pod of porpoise marauders moved in and the trout disappeared. A disappointed Toledano moved the boat back to the first spot they fished.

With one pull of the cord, his EU 2000 Honda Quiet portable generator was softly purring. He plugged in a Hydro Glow Fish Light and dropped the bulb overboard.

Essentially a 4-foot-long light stick that floated vertically in the water, its eerie green light quickly attracted a handful of glass minnows.

Glass minnows (properly called silversides) are usually the first bait that turns up at lights, Toledano explained. Others, such as shrimp, pogies and mullet, come later.

The light also revealed bad but not unexpected news. Instead of floating away from the boat to the length of its electrical cord, the light bobbed up and down right beside the boat.

The tide had quit.

“Let’s go to the Wreck,” Toledano suggested 10 minutes later. “It’s 2 ½ miles southeast of here, and the tide should be running there.”

The Wreck isn’t, as its name would imply to the uninitiated, a ship wreck. Rather, it is the debris from an old oil-field structure.

Toledano maneuvered the boat to very near a big platform about 80 yards from the Wreck, anchored and dropped the light.

Gobs of glass minnows showed up, but the light was still stubbornly floating right next to the boat.

“We’ll just have to be patient until the water starts to move,” Toledano said stoically.

He and Dennis began tossing live bait. Toledano hooked his under the horn on top of the shrimp’s head. Dennis ran his hook through the last joint of the body right before the tail.

It didn’t matter. They couldn’t buy a bite.

LeBouef cast a baleful eye on the proceedings, pulled his sleeping mat out of a boat compartment and flopped down.

Toledano moved again, this time to the Black Tanks on the edge of where Black Bay merged into Breton Sound. LeBoeuf, who roused himself for the boat ride, went back to bed.

“If you catch a few speckled trout, I’ll get up,” LeBoeuf replided from his cradle. “I can catch catfish at home.”

The light seemed to want to do the right thing, but it didn’t line out to the end of its cord. Instead, it just drifted aimlessly. But at least it wasn’t plopped still right beside the boat.

“The tide charts are way off,” a bewildered Toledano muttered.

He busied himself with setting up a second light while Dennis fished hard. This light was a Fish Vector. It resembled the floating bulb paired with a bullet weight, but the bulb didn’t float

Instead, it sank to the bottom and lighted from the bottom upwards. It was adjustable to be able to ride higher in the water by increasing the line between the weight and the bulb. Its color was orange-green compared to the almost chartreuse green of the Hydro Glow.

“I want to create an aura of light over the whole area around the boat,” Toledano explained.

But the aura didn’t produce enough to satisfy the two men. The lights were pretty under a sky plastered by a big smear of the Milky Way, but even glass minnows boycotted this set-up.

Toledano moved the boat again, to a lighted platform due north of the Black Tanks.

“The concrete barge located on this spot before (Hurricane) Katrina had quartz lights on it,” he said. “It was incredible for night fishing.”

Now it has a steel barge moored to pilings next the platform.

LeBoeuf rose Lazarus-like from his sack and began fishing. He promptly caught a hardhead. Then, much to Toledano’s amusement, he caught another hardhead.

That was enough for the trio.

Toledano piloted the boat back to the second platform of the evening. As they approached, it was easy to see speckled trout mauling baitfish on the water’s surface.

By 3 a.m, they were really hammering them. Rattling corks were rattling and fish were flouncing on the deck — often three at a time.

The tide was really rolling now.

After an hour of beating the trouts’ brains out, LeBoeuf put his rod up and stood with his hands in his pockets watching the other two.

“Naw,” he replied. “I’m waiting for the bigger ones to show up.

After a bit, he grumped at his buddies.

Good-naturedly giving in to his good friend’s wishes, Toledano had Dennis pull the anchor. But before the anchor was up, LeBoeuf had slithered back into bed.

When the boat got to the rig, LeBoeuf cracked an eye open, closed it and didn’t bother to get up. They didn’t catch a fish.

Daylight was on the men’s necks and their box almost full, but like a tippler who needs a hair of the dog that bit him, Toledano and Dennis — diehards all the way — stopped the boat at another platform they agreed was always good for an early morning bite.

As they reeled in one fish after another to finish the trip, boatload after boatload of anglers passed them on the way out for a day of fishing in the hot sun.

I almost felt sorry for them.

Just eight days after Hurricane Ida, Marsh Man Masson was able to survey the marsh and check on its fish populations. […]

Adam Shields has a strategy to intercept a speckled trout’s transition this month by using travel routes and baitfish habits against them. […]