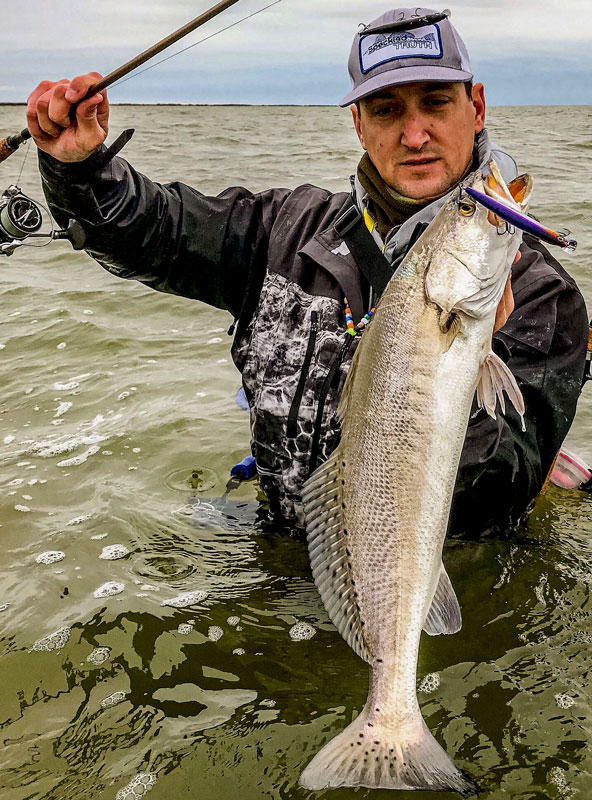 Twitchbaits, jerkbaits, stickbaits — they all have their place in the tackle boxes of anglers targeting speckled trout. Here are a few ideas about choosing and using them.

Over the past few years, I have progressively increased the time I spend throwing hard baits for speckled trout, and the average size of the fish I catch has increased.

The baits can be categorized as twitchbaits, jerkbaits and topwater stickbaits. They cannot be used in every situation, but I am very pleased with how versatile they are. But given the astonishing number of choices available, deciding which ones to buy can be daunting, especially with an average price tag around $7. To make that choice a bit easier, here are some things I have learned while throwing these lures for speckled trout.

Fish have the instinct to watch for creatures above the water, not just in the water. This is easily observable in my neighborhood creek, where minnows scatter when I approach the bank — and for good reason. Egrets and herons wade the creek, and minnows are definitely on the menu.

When the sun is high and light penetration into the water is greatest, near-surface underwater objects are more visible from above the water. Fish instinctively know in this situation that they are in more danger from predators, and they will move to put cover between themselves and the surface or move deeper. In low-light conditions, whether early morning, evening or under cloudy skies, objects below the surface are less visible from the sky. This apparently gives speckled trout more confidence to feed at or near the surface. We can use this relationship between a trout’s comfort level when feeding and daylight conditions to help us choose the appropriate hard baits.

Two other conditions decrease the visibility of objects in the water: wave action and turbidity. These theoretically improve the protection for fish from overhead predators, but do they bring the trout to the surface to feed? My experience suggests that surface ripples in bright sun can encourage a rise, but larger waves and turbidity do not. Therefore, I don’t typically move to surface lures because of rough water in those situations. In fact, high turbidity is the condition in which hard baits are the least effective.

As a general rule for spring, I fish topwater or shallow-running baits in low-light conditions. Plenty of baits work well, but here are some I often throw. For topwaters, I use MirrOlure SheDogs and Heddon Zara Spooks most often. Some excellent choices for shallow-running baits are floaters like a Matrix Shad RipShad and Texas Custom Lures’ Double D. Shallow suspending baits I use regularly are: Rapala Shadow Rap and Subwalk, and Mirrolure’s MirrOdine and Catch 2000. These last two lures are versatile, because if worked fast, they are effective near surface, and if worked slowly, they are effective in the middle of the water column.

When light intensity increases, trout are less willing to rise high in the water column to chase topwater or shallow-running jerkbaits and twitchbaits. I find it amazing that even in water as shallow as 2 feet, trout often will not rise to hit a topwater bait on a sunny day. There are certainly exceptions, especially in spring when warm days can make the trout aggressive, but I generally fish deeper as light intensity increases.

We are blessed to have plenty of quality lures to choose from when fishing deeper. Most I use are labeled as suspending, but don’t rely on the rated depth when using these in inshore waters. Many baits, such as the MirrOlure lineup, appear to be rated for buoyancy in full saltwater. In the low-salinity, less-dense waters of the estuaries, these baits will suspend at twice the rated depth.

Lures for the bottom

If I want a faster cadence near the bottom, I will use lipped baits such as the Rapala X-Rap series and Husky Jerk, and the Matrix Shad Matrix Minnow. These suspending, lipped baits reach the bottom by driving, so they can provide an aggressive action near the bottom, and when paused, float slowly upward. That’s the opposite of lipless, suspending baits, which rise when worked and fall on the pause. As subtle as that difference may seem, I have seen days when the trout only wanted one of those two actions, so I experiment with quite a few different hard baits on many trips.

One of the most-difficult questions is whether the color of a bait makes a difference. This complicates bait selection, because it adds another layer to the decision tree. I started conservatively, mostly fishing natural-looking color schemes, while I concentrated on the functional aspects of these baits. Once I felt confident selecting baits based on their function, I began to experiment with colors. One thing I have learned is that some of the most-outrageous color schemes, such as electric chicken, can be very productive. I have begun regularly fishing suspending baits with pink, gold and bright red colors.

One final aspect of hard baits is their size. Along with experimenting with colors, I have been experimenting with many sizes of baits. It is surprising how big a lure a small trout will attack and how small a lure big trout will inhale. To be clear, I am fishing in areas where a big trout is 3 pounds and a trophy is 6 pounds, so the difference between small trout and large trout is not as substantial as in some other Gulf Coast regions.

My conclusion is that larger baits, 4 inches and longer, do increase the size of the trout caught, on average, but they also reduce the numbers of trout caught. That said, there are certain conditions where even the larger trout will only hit small baits.

Some of the larger baits I like to throw are the Fat Boy, the Subwalk and the Catch 5. I am also experimenting with large, jointed suspending swimbaits, such as Sebile’s Magic Swimmer. One thing I recommend is to stay flexible on bait size, and change often until you find what works on a particular day. I will typically prepare for rods with a range of bait sizes and types, and I replace many of these throughout the day.