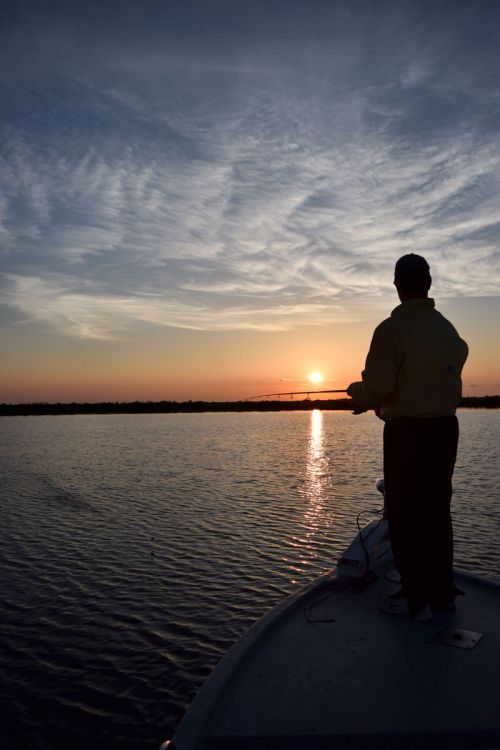 As the sun started to make its appearance over the horizon, Larry Frey’s monofilament was already stretching on the first speckled trout of the day. He landed the fish and began working on filling out his limit, which he did.

It was a cool morning with not a puff of breeze — a rare condition for May. This month is far away from the season of polar vortexes, but it was almost as if Frey couldn’t get winter off his mind, almost like he was dwelling on the fact that the season wasn’t there. That’s because the speckled trout Frey caught came from water depths that anglers conventionally fish in the winter.

In the spring, the fish get shallow to feed on bait that is occupying the flats, right? Yes and no.

Although this is true to an extent, a surprisingly large crop of speckled trout stay in that deeper water.

Frey focuses only on deep-water ledges this time of year, and he has phenomenal success with nice speckled trout.

“I definitely fish more deep water in May,” he said. “A lot of people want to fish corks — you can catch fish with them — but I always seem to find you have nicer trout on the bottom.”

So, if it’s plenty warm enough for speckled trout to not feel the need to huddle together in thermoclines, why in the heck would they be in deep water?

Well, Frey says there’s one baitfish that spawns in the spring, and it’s what holds gobs of trout in the depths all throughout the season.

“They’re in that deep water chasing the juvenile croakers that spawned in early April or late March,” he said. “The shrimp will show up in the latter part of May.”

When Frey finds the fish in an aggressive feeding frenzy, he’ll oftentimes see the fish regurgitate the baitfish.

“You’ll catch some fish that spit up croakers in the boat,” he said.

When many anglers think of deep water, they imagine winter. However, these deep-water spots are nothing like the tide-absent ones they would fish in the winter, and that calls for a much more aggressive presentation of lures.

Frey focuses on steep ledges that go from roughly 3 feet to about 18 feet just inches off the bank. In fact, one of his most productive spots on this particular day was one where the bow of his boat was sitting in 3 feet of water, and the transom was floating over 25 feet of water — a serious drop.

Identifying steep ledges doesn’t necessarily take a rocket scientist, but anglers do need to know what to look for, according to Frey.

“I look for boiling water, moving water up and down a shelf,” he said.

Once Frey spots this, he oftentimes either parks his boat on the marsh or sticks his Cajun anchor right next to the land and casts out into the deep water, walking his baits up the ledge. Before he starts casting, though, he makes sure his boat is in the exact location he wants it to be so he can work his lures effectively. If the boat is even slightly off, he’ll readjust.

“Boat positioning is the most important thing about this,” he said.

The reason why these hard drop-offs are much more productive than the sloped ones is because when the tide runs right up against the shelf, it jams all of the baitfish into it, and the trout can gobble up the baitfish with little effort. It’s like the prey are getting shoved right into a wall, and because they’re already disorientated by getting compressed into the ledge, the specks sit there and enjoy a feast without expending much energy.

As one might imagine, tide plays a big role in this technique. Go to these ledges on a neap-tide day, and you just don’t have anything to drive those baitfish into the ledge. They can roam around freely, and there’s no ambush points for the trout.

Frey said knowing general tide cycles will greatly aid in your success this time of year.

“In May, you’ll usually get the falling tide early in the morning, and you’ll have a rising tide the rest of the day,” he said.

This is important because those ledges that you fish on an incoming tide most likely won’t produce a fish on a falling tide because there’s no water compression up against that ledge on the opposite tide.

Oyster shells and trout go together like peas and carrots, and fishing the ledges in Delacroix is no exception, according to Frey.

“I like any ledge that has oyster shells on the bottom of it,” he said. “They attract the bait, and I think that’s key.”

During last year’s May trip, Frey dealt with dingy water, but it didn’t seem to greatly hurt his success.

“You can still catch them in stained water,” he said.

Strong winds in the spring are about as common as sunflower seeds at a Zephyrs game, and although Frey certainly doesn’t like wind, he said there are a few directions that are manageable.

“As long as the wind has some kind of southerly component, you’re fine,” he said. “Anything with north tends to make it a little more difficult in Delacroix.”

In May, there are speckled trout on the flats, but there’s not as many of them and they’re not as big, according to Frey.

“You find some of the better fish in this deep water,” he said.

Most of the fish Frey caught this day averaged 14 inches, but he had several of them that were pushing 20 inches.

Feeling subtle bites in deep water isn’t an easy thing to master, and although the majority of the fish are going to try to rip the rod out of your hand, there’s certainly a population of fish that just mouth the bait and require high-end equipment to feel the light tap.

Tied to the terminal end of that line, Frey connects either a single 3/8-ounce jighead, or a double rig with a ¼-ounce jighead on the top and 3/8-ounce on the bottom.

“You have to go to each spot and fish both,” he said. “It’s a totally different feel and different look to the fish.”

Many times when the current is ripping in Delacroix — a common occurrence with strong easterly spring winds — Frey will go to the setup with more weight to help him easily hold contact with the bottom.

“A double rig slows the bait down when you’re fishing a stronger tide,” he said.

On days when the current is absolutely screaming, Frey bumps up the jigs to a double 3/8-ounce. With current so strong, you can leave your single 3/8 or even ½-ounce in your tackle box.

Frey threads on Saltwater Assassin chartreuse-colored curly-tails on to his top jig and a shrimp creole-colored Matrix Shad on his bottom jig.