“Each management scenario that you’ll see represents a specific (percentage) savings to the stock, and that saving is in the female yield that’s landed,” Adriance said to the commission. “We did that from 5% up to 30% – in 5% increments.”

“Our (LDWF) goal is to see recovery by 2025 with at least a 20% savings,” he said. “However, we’d like some feedback from the commission.

Adriance also had a warning to commissioners regarding the consideration of recovery time.

“If you want to recover faster – there will be more pain to anglers,” the biologist said.

Possible changes in creel limits only by Basins 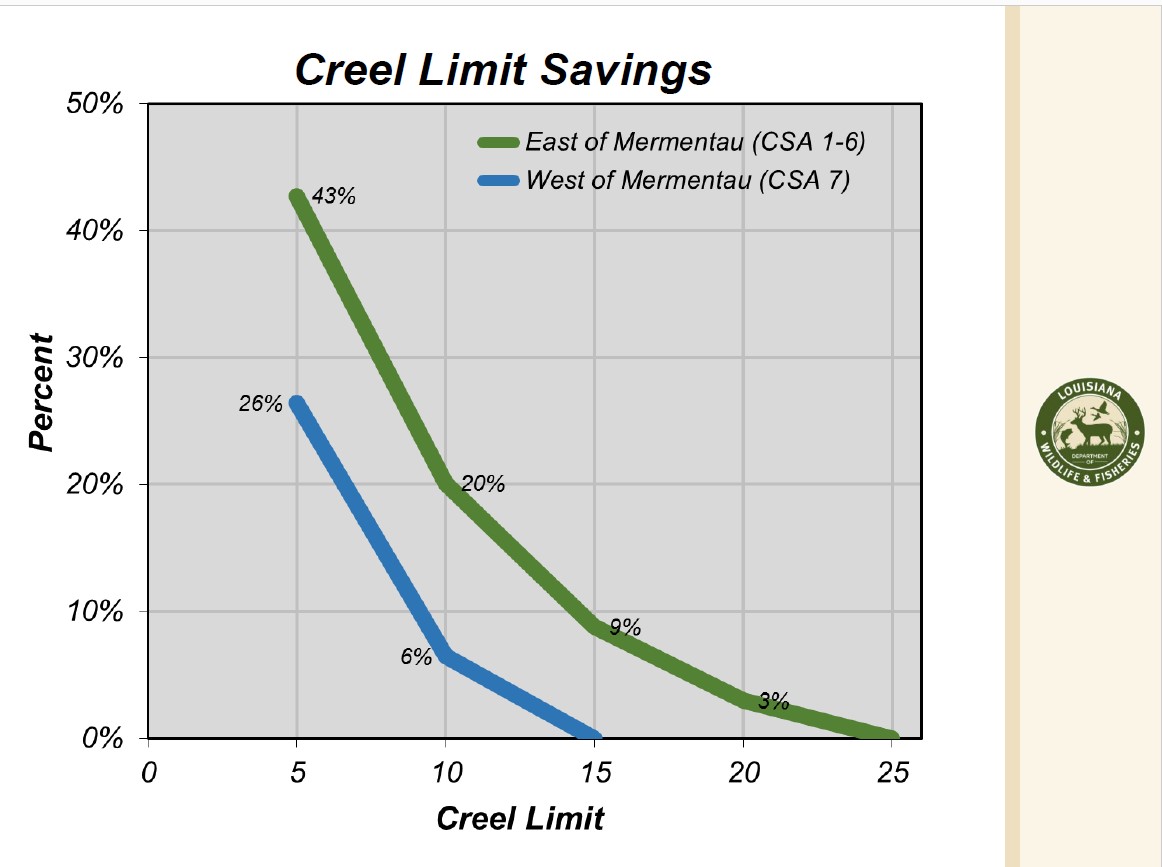 Regarding significant changes in only creel limits in an effort toward reaching the 20% savings, this slide depicts what would be necessary in adjusting creels in the Mermentau/Calcasieu/Sabine Basins compared to the eastern basins along the Louisiana Coast.

“Since the Calcasieu area already has a 15-fish creel, to get above a 20% savings, you would need a 5-fish creel,” Adriance said.

“Elsewhere in the state, if you took the rest of the state to get to that 20% savings, it would be about a 10-fish creel that you would need if you were looking at just creel limit changes.” 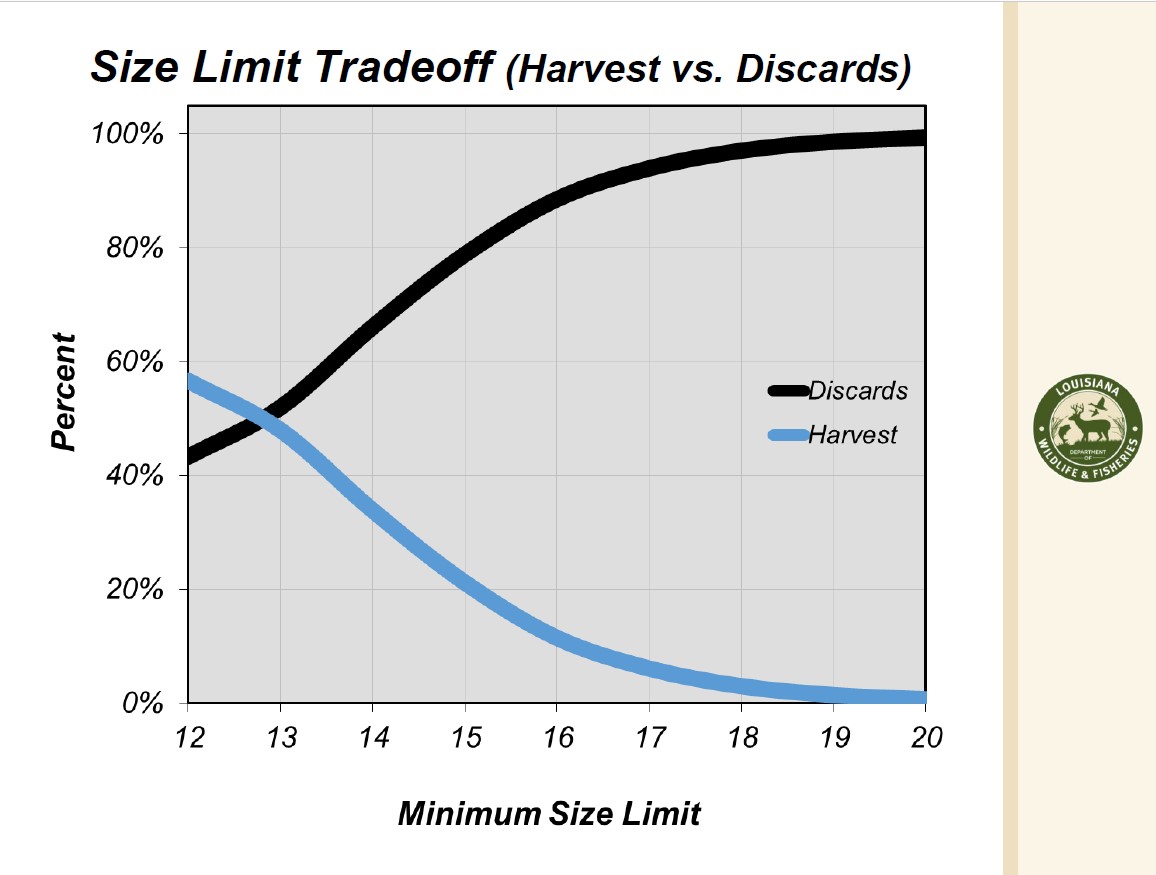 “Right now currently at 12-inches (on the graph), we’re harvesting about 57% of the trout that are landed, and about 43% are discarded. As you move up, 14 inches for example, you would be harvesting about 34% and discarding 66%.

“So there is a trade-off and I just wanted to make y’all (commissioners) aware of that.” 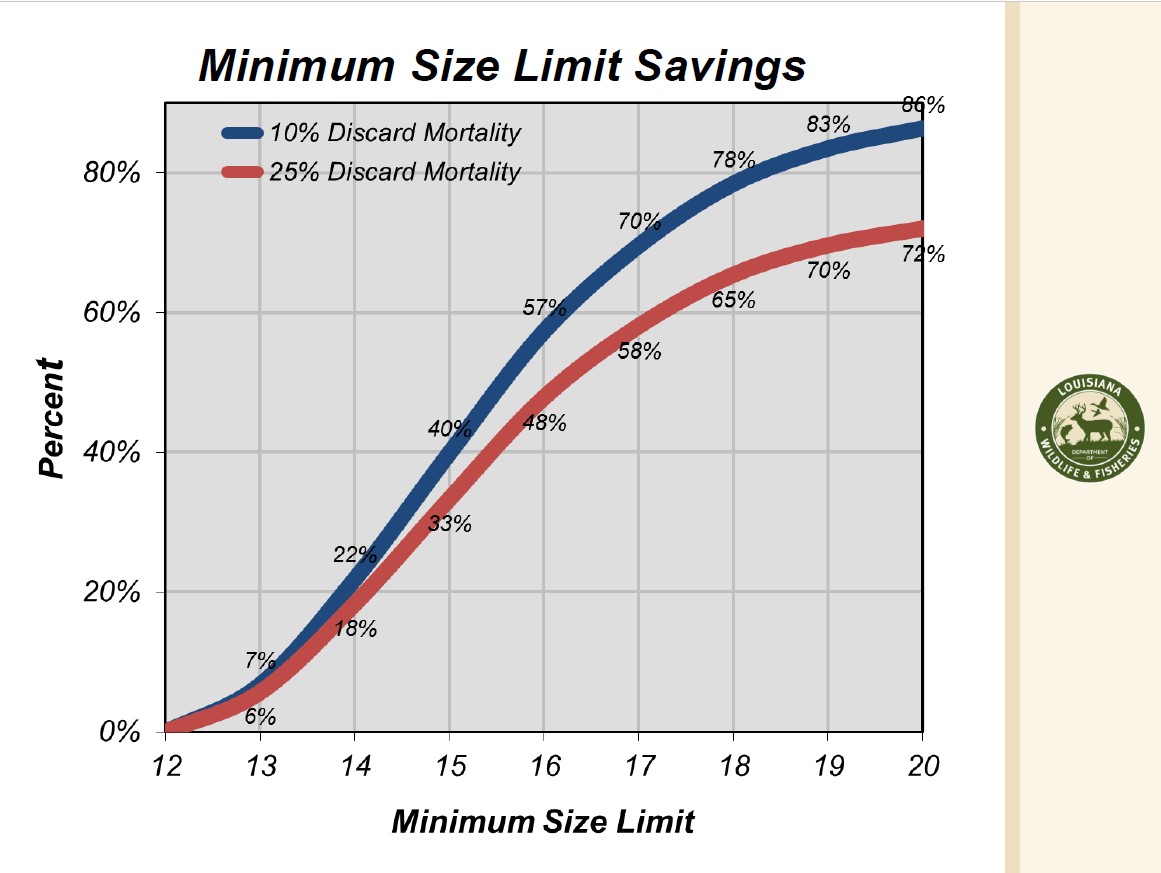 Adriance said the LDWF used a 10%-discard mortality as used in the 2019 speckled trout assessment.

“The 10% (discard mortality) is what we used in the assessment as I mentioned, and that’s the general, average gulfwide . . . what the studies show. And a lot of the other states use that in their assessments.

“We just wanted to put another, a worse case in there for you to see for in case for some reason all those studies are off, or we’re off – here is something to bracket for projections,” he said. 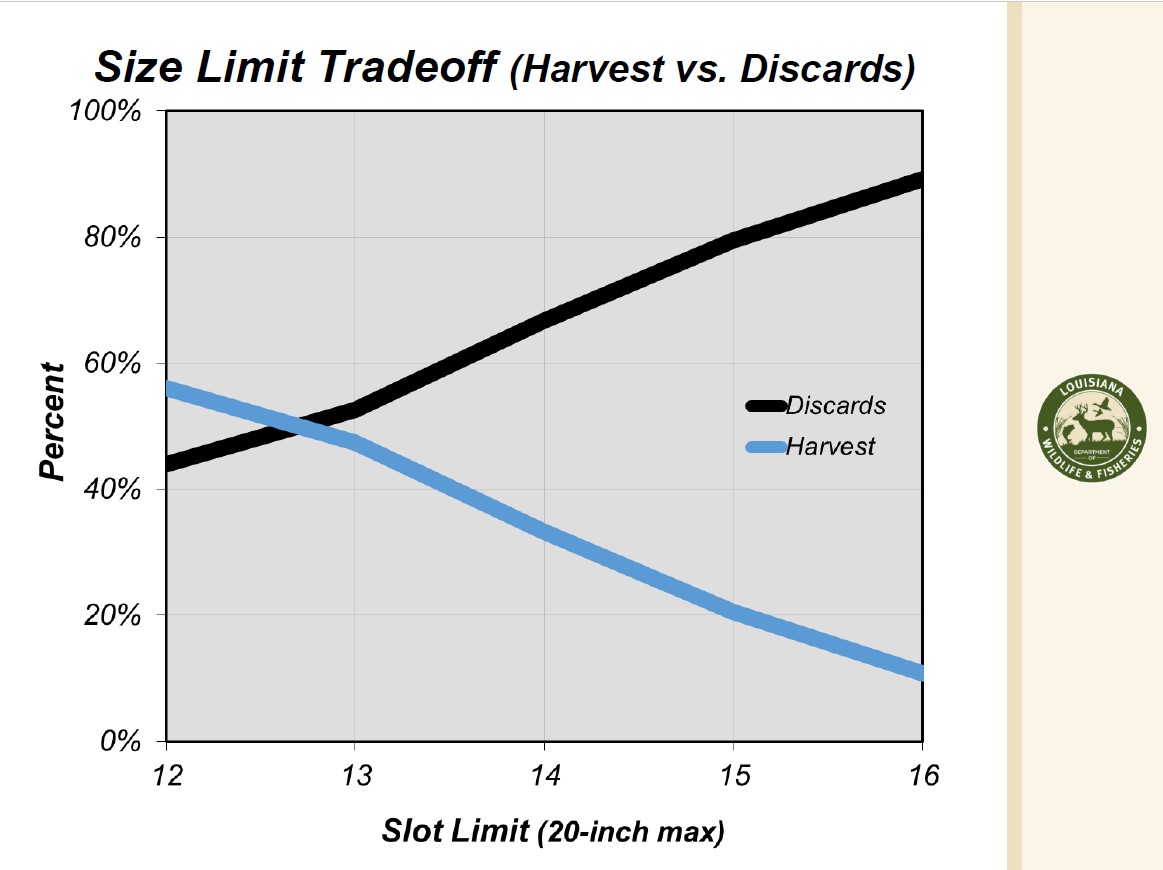 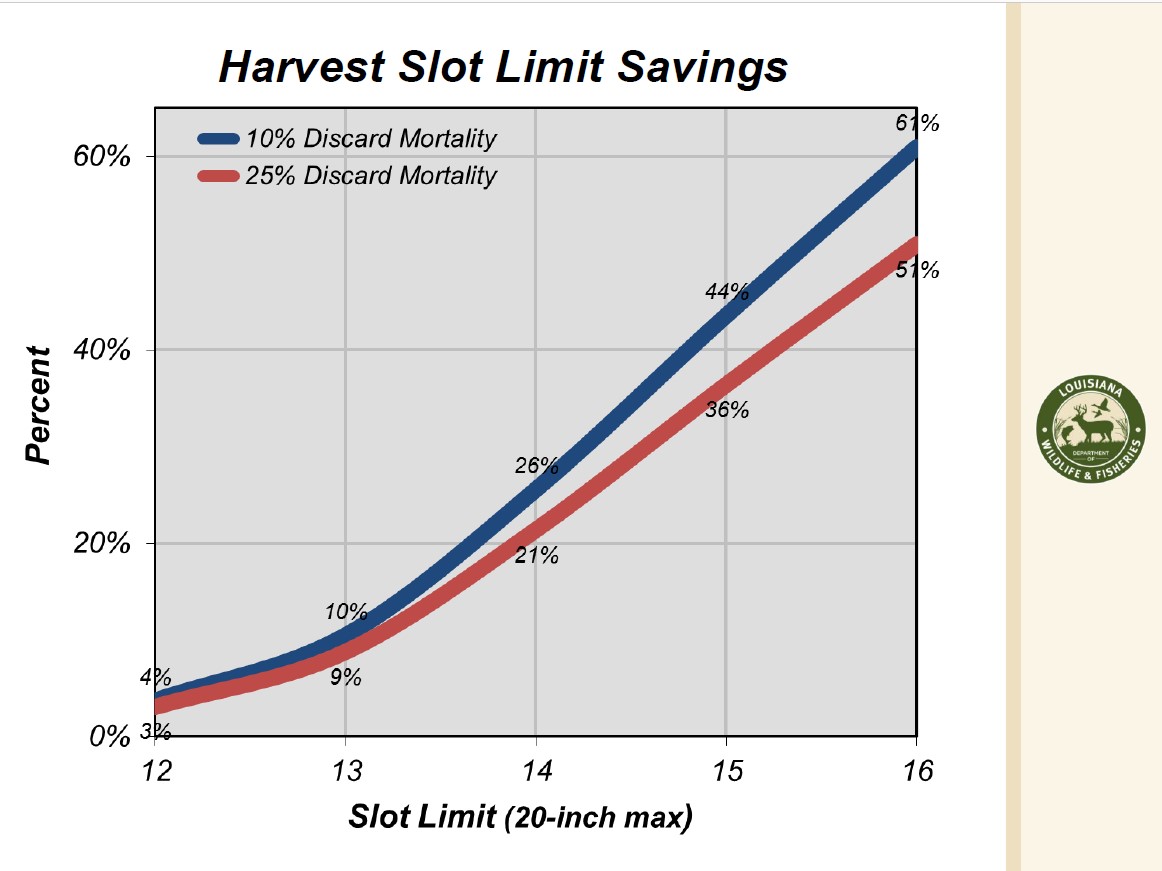 According to LDWF biologist administrator Harry Blanchet, these are harvest-only slots. Using a 15- to 20-inch slot as an example – trout may only be harvested within the parameters of 15 to 20 inches. No fish may be kept by anglers below 15 inches or above 20 inches.

“The slot limit as operationally defined in the projections is harvest-only allowed within that slot only,” he said. “The projections also do not account for any allowance over the slot.” 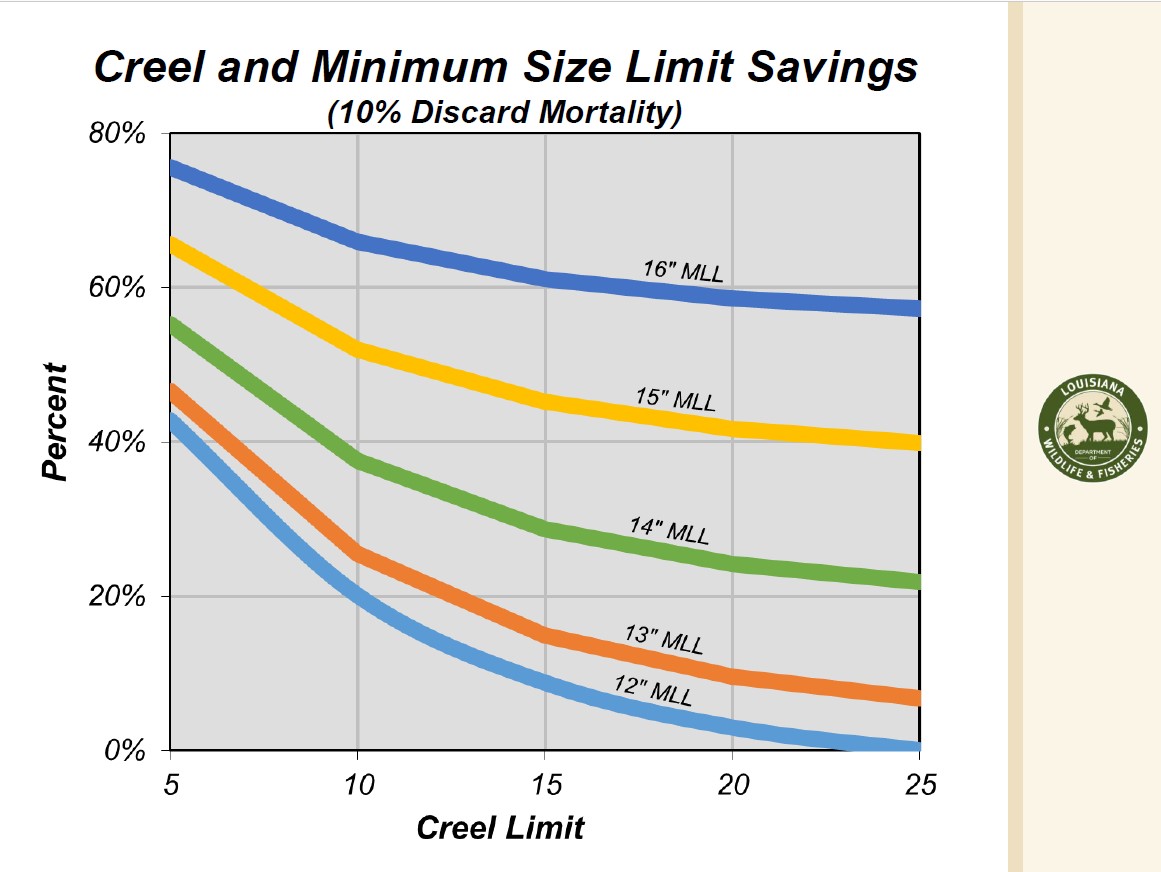 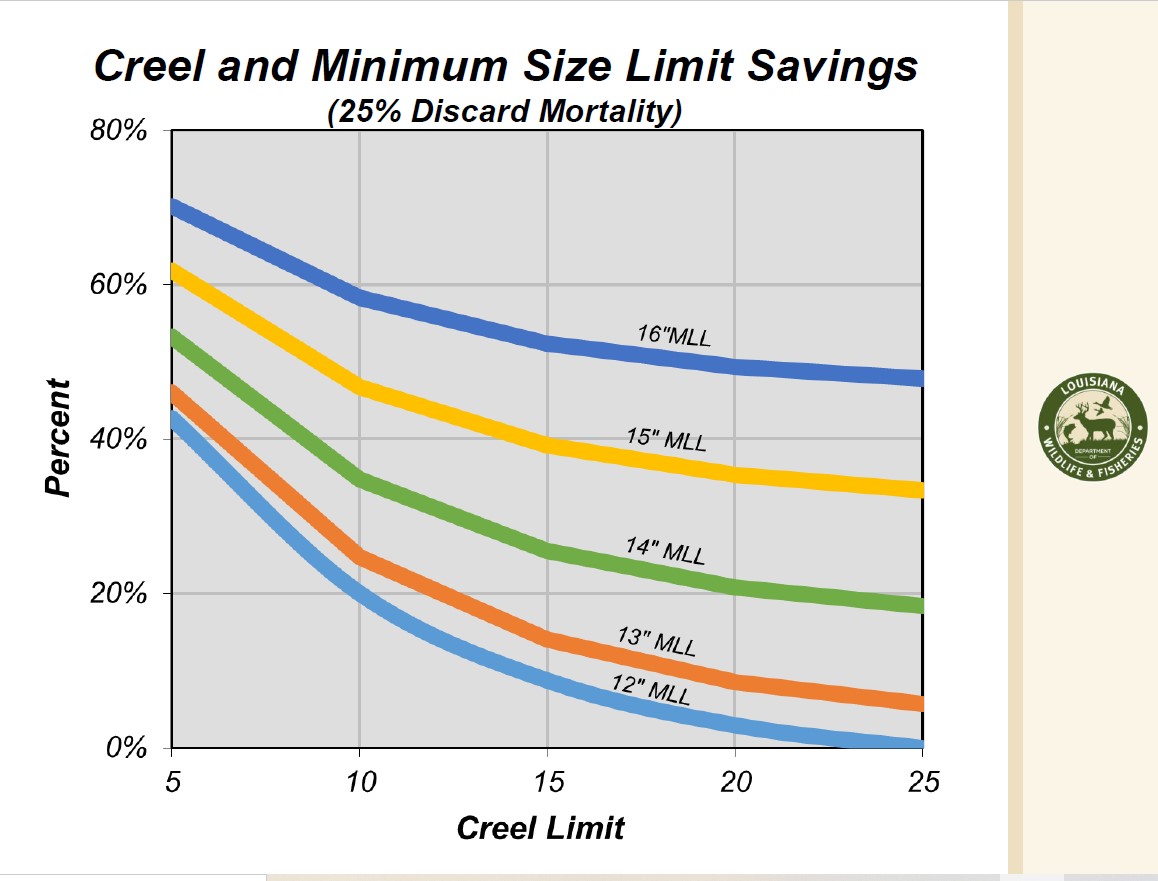 “For 25% discard mortality, it’s slightly different as it comes in at 18% savings with a 14-inch minimum length at a 25 bag (creel). To get just above 20% you would be at a 20-fish bag if you were assuming the worst-case point.” 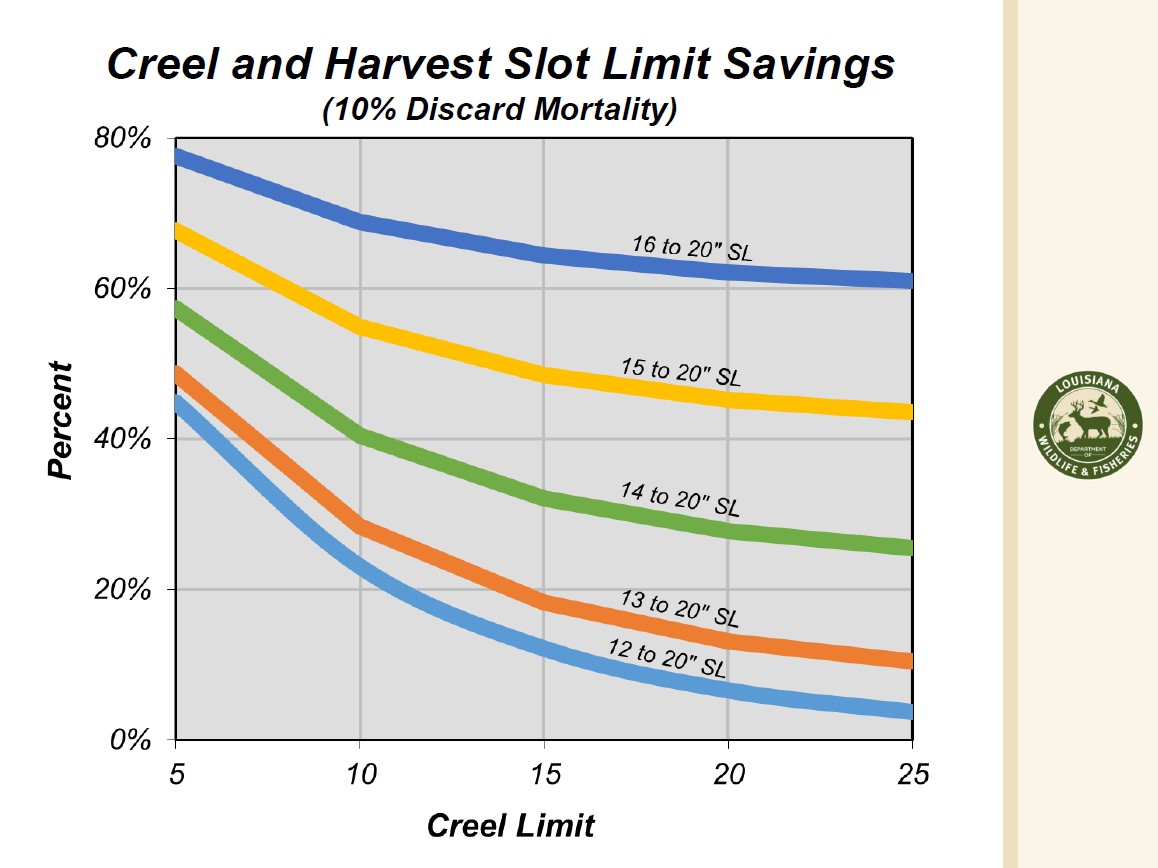 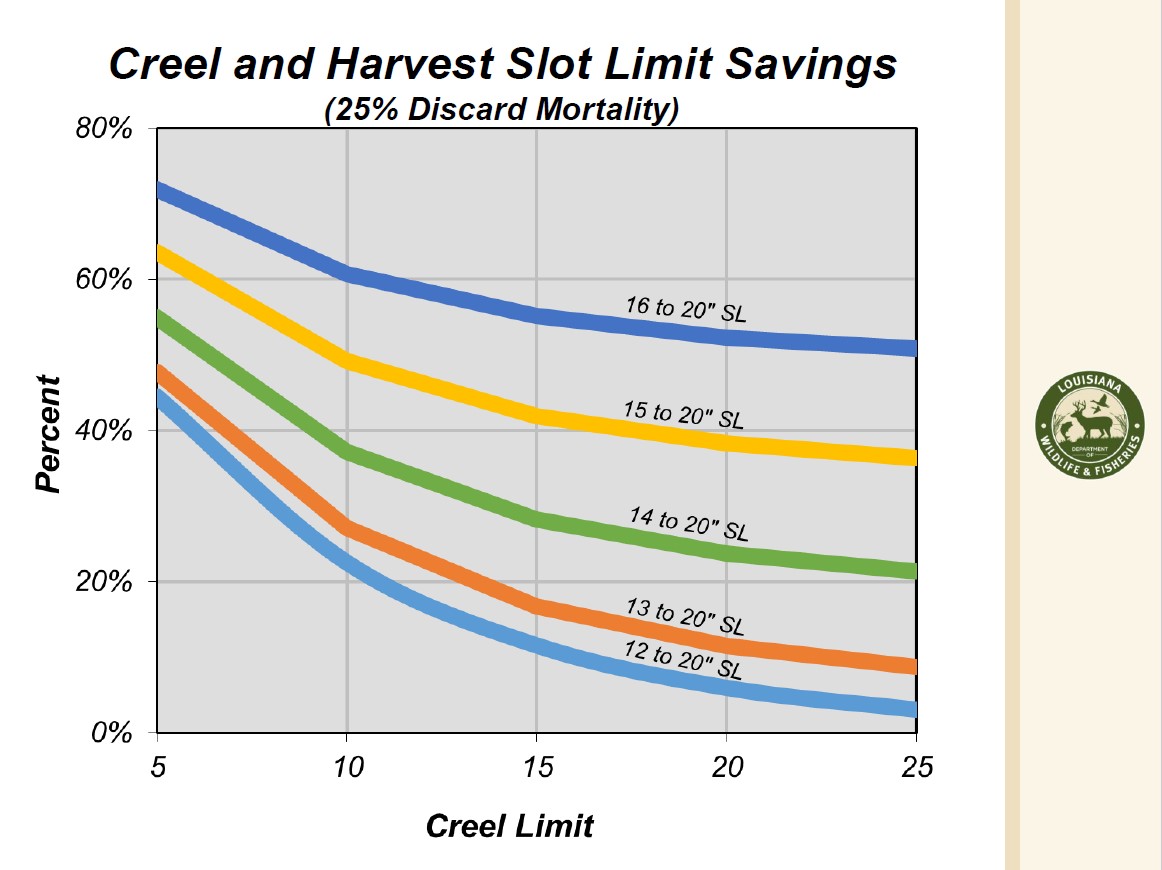 “If we do the same thing for slot limits at the 10%-discard mortality, you will see anything that’s above 14 . . . there’s no bag limit change required if you’re using that 20% as our example bar,” Adriance said.

As reported above when considering the use of slot limits however, anglers are reminded that discards and discard-mortality rates rise as slot limit parameters increase. 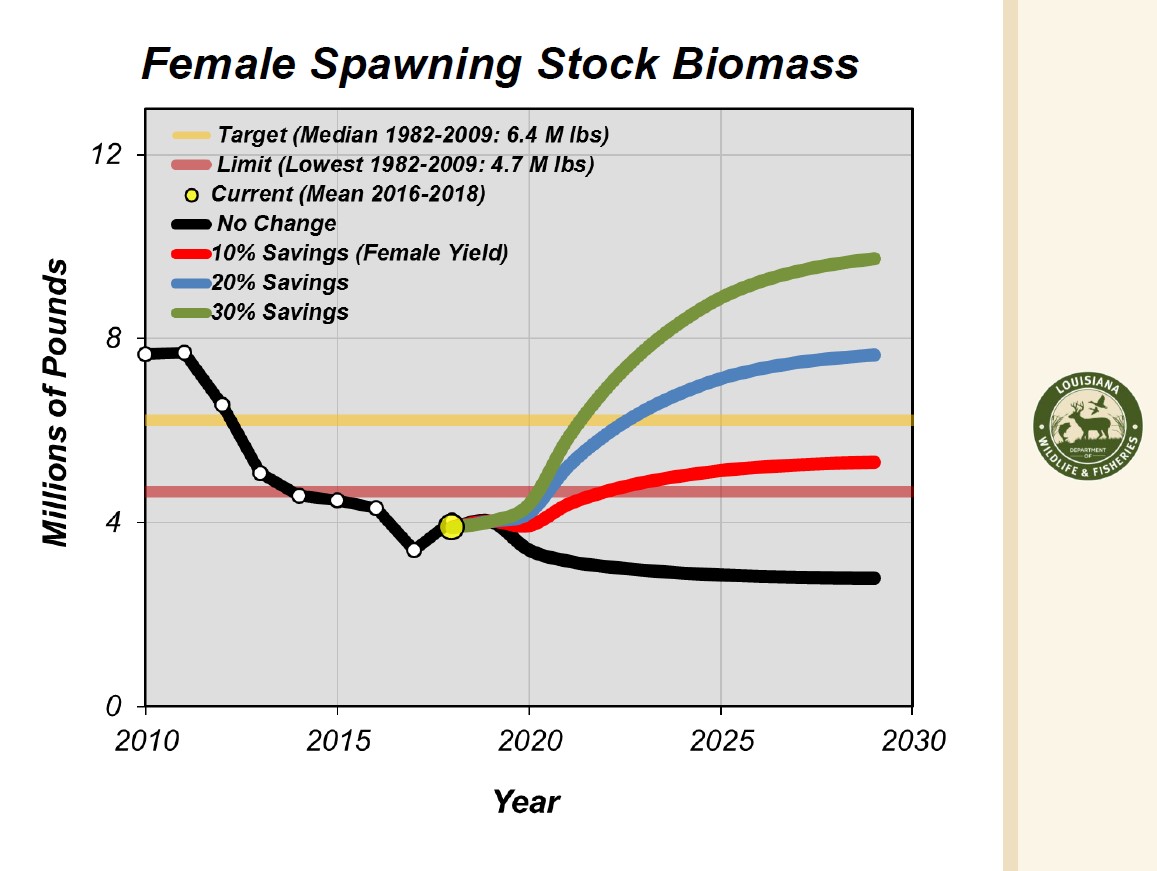 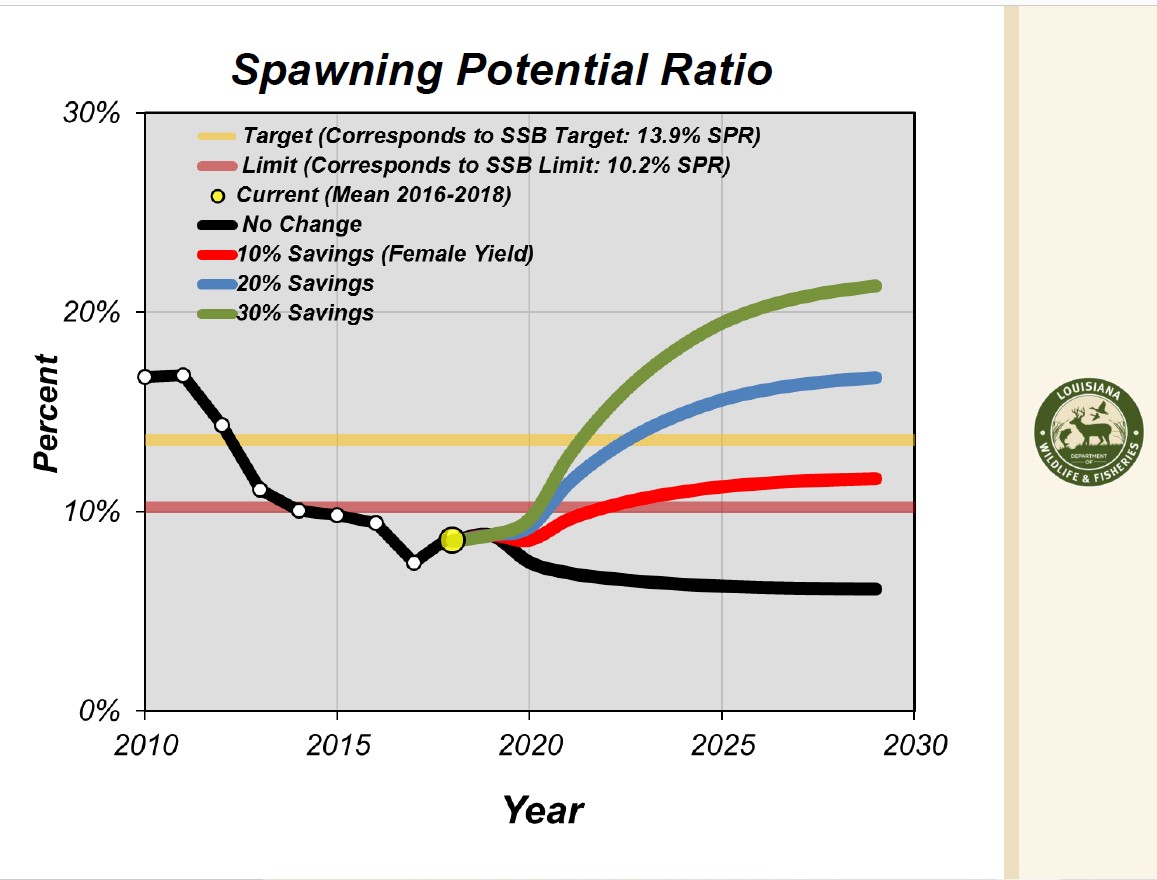 To arrive at projections of 20% by the year 2025, the female spawning stock biomass target (yellow line: 6.4 million pounds) should be surpassed at 20% savings between 2023 and 2025 barring no significant freezes or extreme freshwater inundation and if the current recruitment indices continue without interruption.

As for spawning potential ratio, the target is 13.9% and should be surpassed at approximately the same time frame as the female spawning stock biomass improves.

As discussed in the 2019 Assessment of Spotted Seatrout in Louisiana Waters, speckled trout age-1 recruit numbers have been consistent since 1983, and this has been the source of some confusion. The age-1 recruits include trout in the 5- to 13-inch range thus allowing the vast majority of recruits under 12 inches in length protection from harvest by anglers.

In previous assessments, LDWF has found that there is significant mortality due to fishing pressure as the stock has been overfished 6 of the 10 most recent years. See the Sportsman story regarding this by clicking here: Commission hears speckled trout stocks in trouble.

“For maturity, you’re looking at 8 to 10 inches,” Adriance said. “Right now with that age structure, this is the majority of our spawning stock – it’s those smaller, first-mature fish.

“If you look at recruitment, we have been encouraged that trends have not been too dramatic.”

In an interview with biologist administrator Blanchet following the meeting, he did not deny the possibility of environmental changes such as a severe freeze that could negatively impact recruitment in the future.

This is even more important when considering that many recruits have just exited the shallow-water marshes, and a severe freeze could dramatically alter the statewide spawn if these young fish are transitioning from the marshes.

Shallow marsh waters have been noted to freeze first and therefore could trap high numbers of the early spawning populations along the coast. 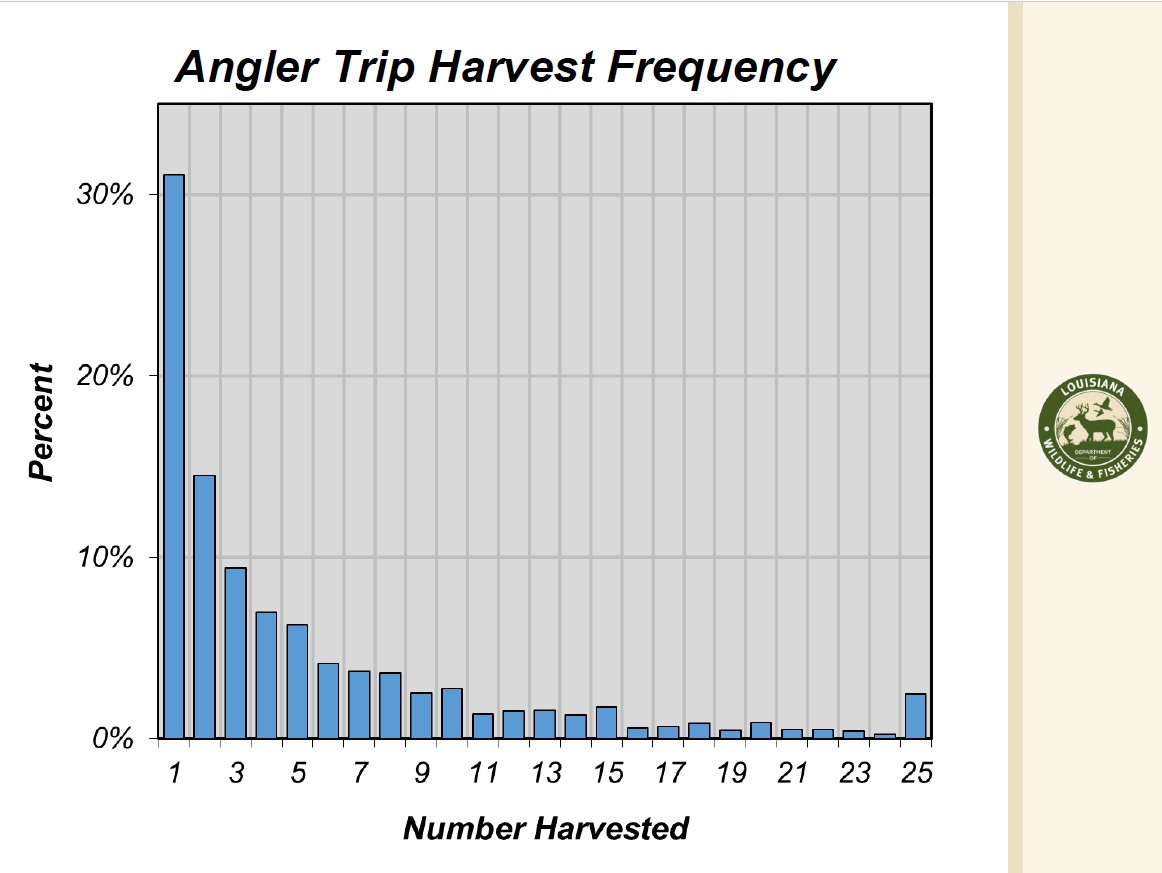 “This is number of spotted seatrout landed per angler trip and the frequency of that,” Adriance said.

Adriance emphasized that the LDWF prefers a 20% savings in landings to occur by the year 2025.

When looking at reductions in creel limits, they would have to be very significant statewide for such a goal to be met. 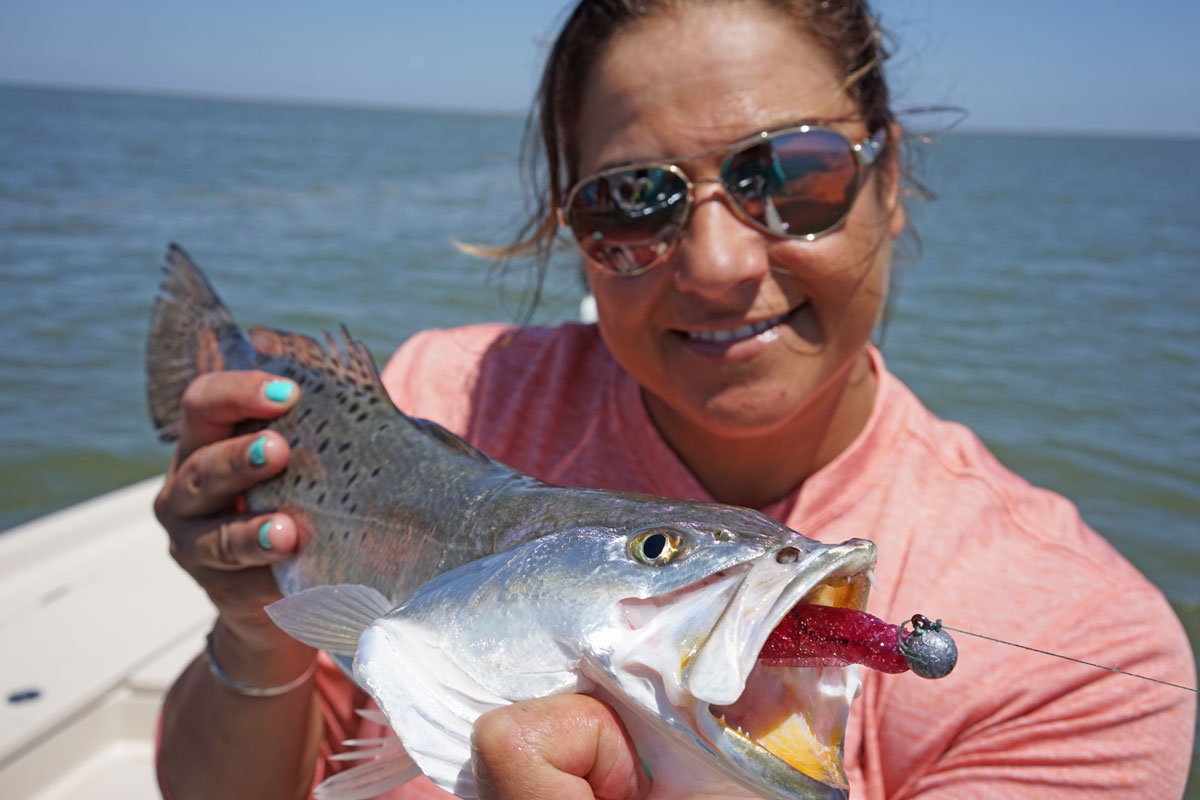 Also, the combinations of adjusting creel limits with minimum length limits and slot limits can reach the same 20% savings, but there will be the disadvantages of high discard rates and high discard mortality further reducing the statewide harvests of anglers.

Biologist Adriance did not yet offer to the Commission specific creel, length or slot restrictions recommended by the LDWF.

Also, other possible management schemes to be considered although distasteful to anglers in general include possible seasonal fishery closures or the use of emergency special regulations following significant freeze events. No details of these were discussed with the commission members.

According to biologist administrator Blanchet, the LDWF will soon be scheduling statewide coastal public meetings to inform anglers of both the magnitude of the problem and the advantages/disadvantages of possible management scenarios.

Following the public meetings, the comments will be presented to the commission who may then decide to come up with a Notice of Intent (NOI) thereby again sending LDWF personnel on the road to discuss the NOI’s specific recommendations from the commission.

Once public hearing are scheduled, the dates, times and locations of the meetings will be announced.