The Louisiana Wildlife and Fisheries Commission decided before its Sept. 5 meeting that it would not vote on adopting any changes in fishing regulations involving the official state saltwater fish — the speckled trout, but the commissioners heard plenty of options from biologists.

Near the end of a slide presentation, Jason Adriance, a fisheries biologist, pointed to a list of choices that may be considered when eventually settling on regulations to be implemented in 2020.

“These are a set of options which will be available to you,” Adriance said. “There can be creel-limit reductions, minimal-length limit increases, harvest slot-limit implementations, closed areas, closed seasons, special regulation implementation after severe winters . . . and we could have combinations of any of the above.”

Just what has happened to Louisiana’s speckled trout population to warrant the commission to consider these options? 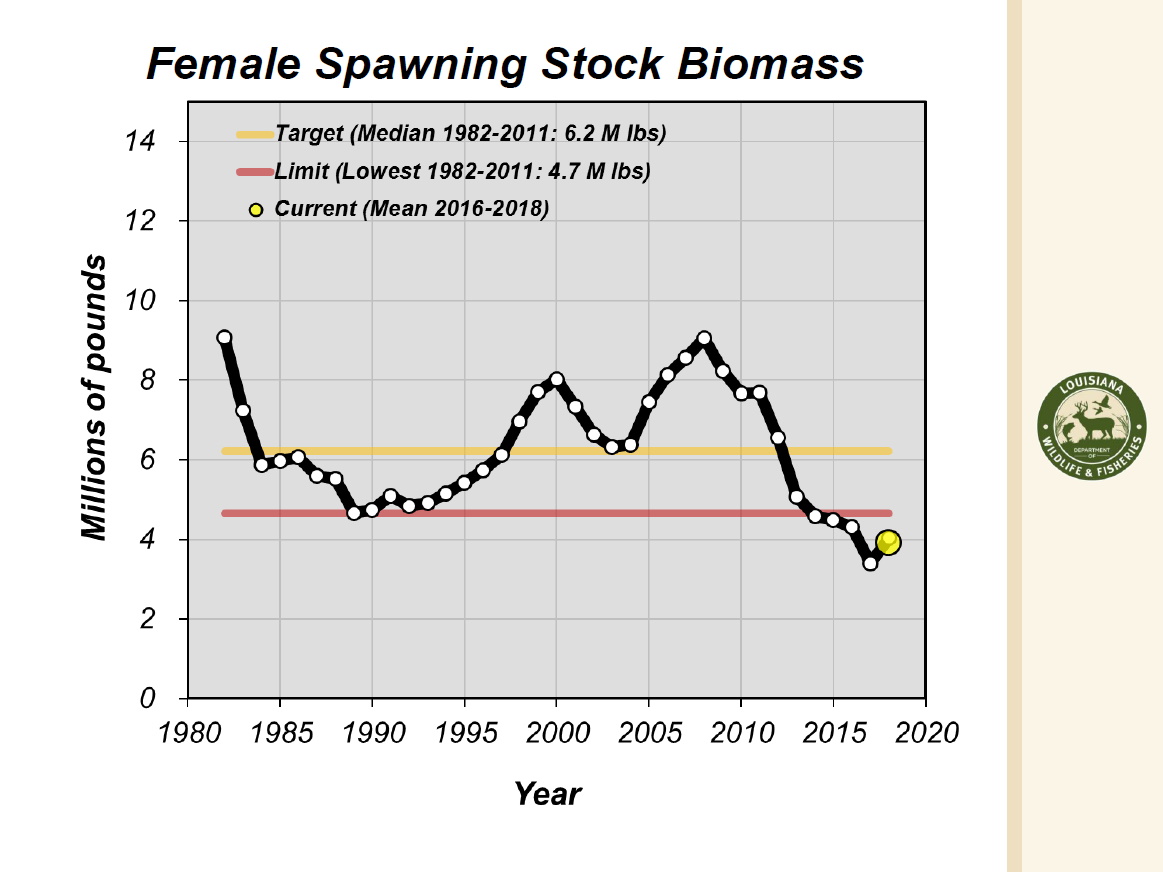 “You don’t want to be below (4.7 million pounds),” Adriance said. “(6.2 million pounds) is what we’re shooting for, the female spawning biomass has been below that target since 2014.” 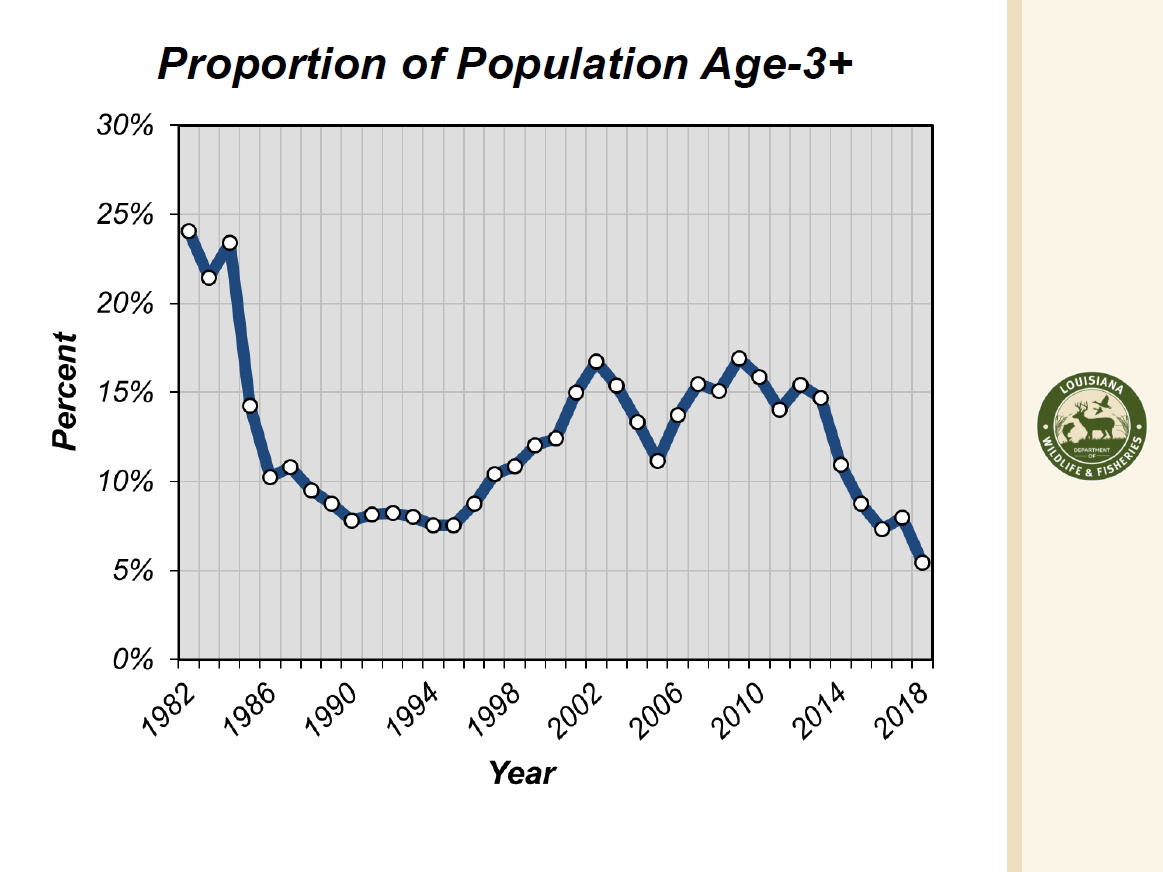 Recreational landings at lowest levels since 1990 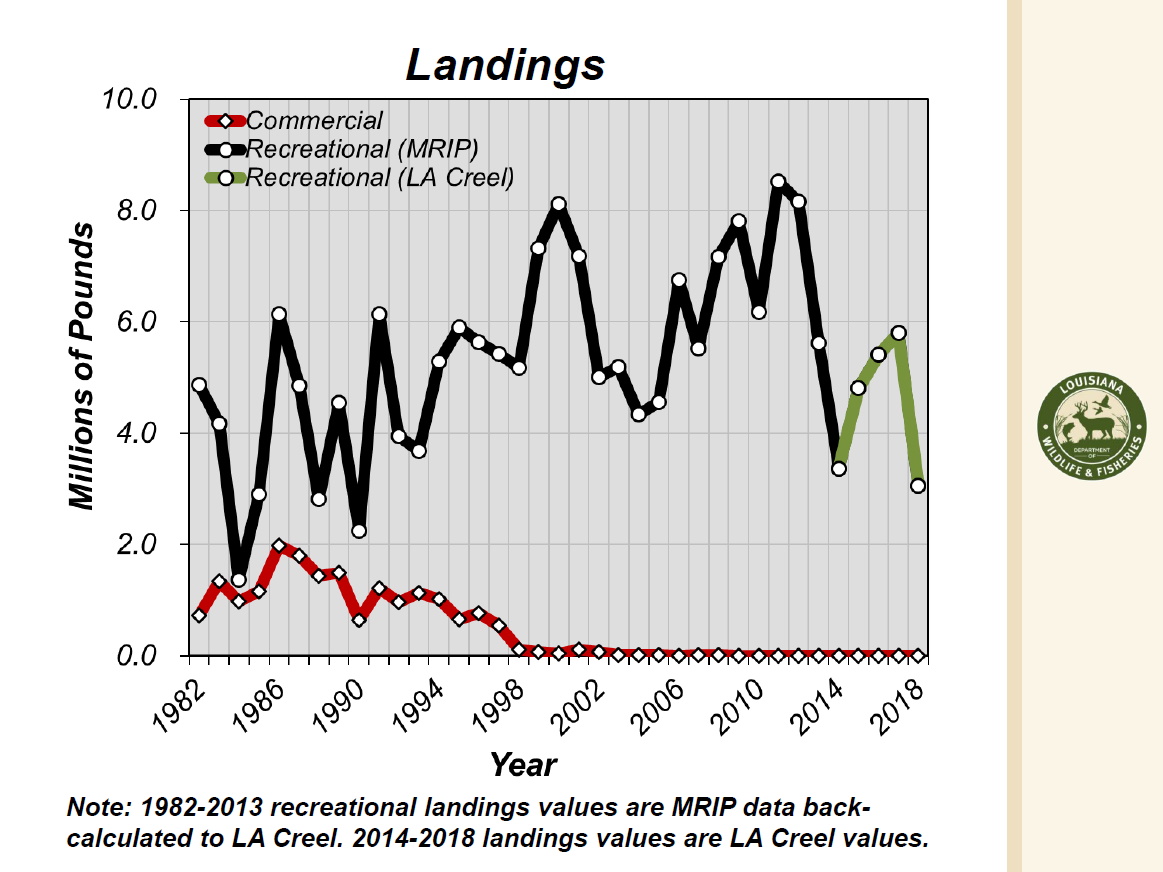 In 2011, recreational anglers caught approximately 8 million pounds of speckled trout. In 2018, the catch was estimated at 3 million pounds.

“Commercial landings are pretty much non-existent since the entanglement net ban in the mid-90s,” Adriance said. 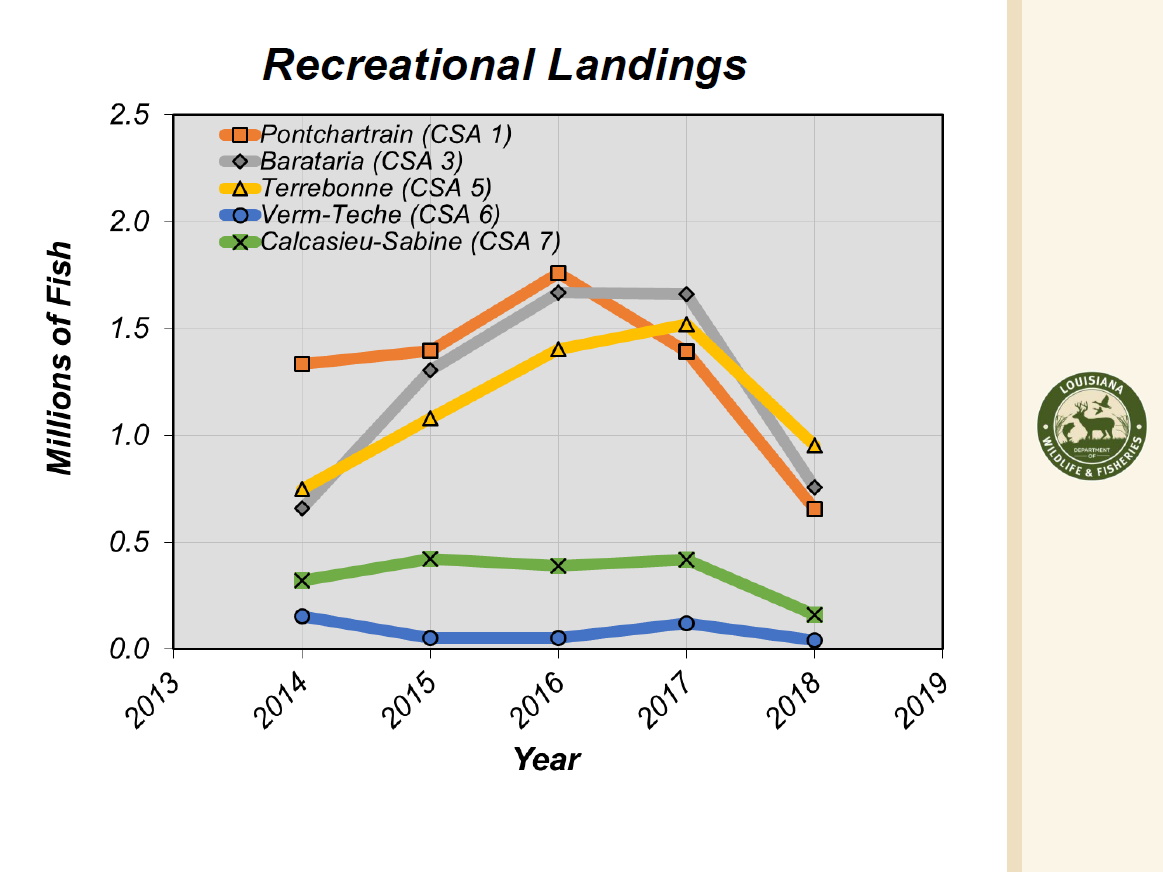 “One of the things that was part of the agreement with LA Creel (Louisiana’s Recreational Creel Survey) and increased license fees was that we would be able to get to Basin-level type data,” Adriance said. “This graphic shows you those recreational landings, but in the recent LA Creel years, we’ve broken that down by Basin.”

Over the past four years, recreational landings are somewhat higher in the Pontchartrain, Barataria and Terrebonne Basins compared to lower landings observed in the Calcasieu-Sabine and Vermilion-Teche Basins.

Unfortunately landings in all Basins fell sharply in 2018. 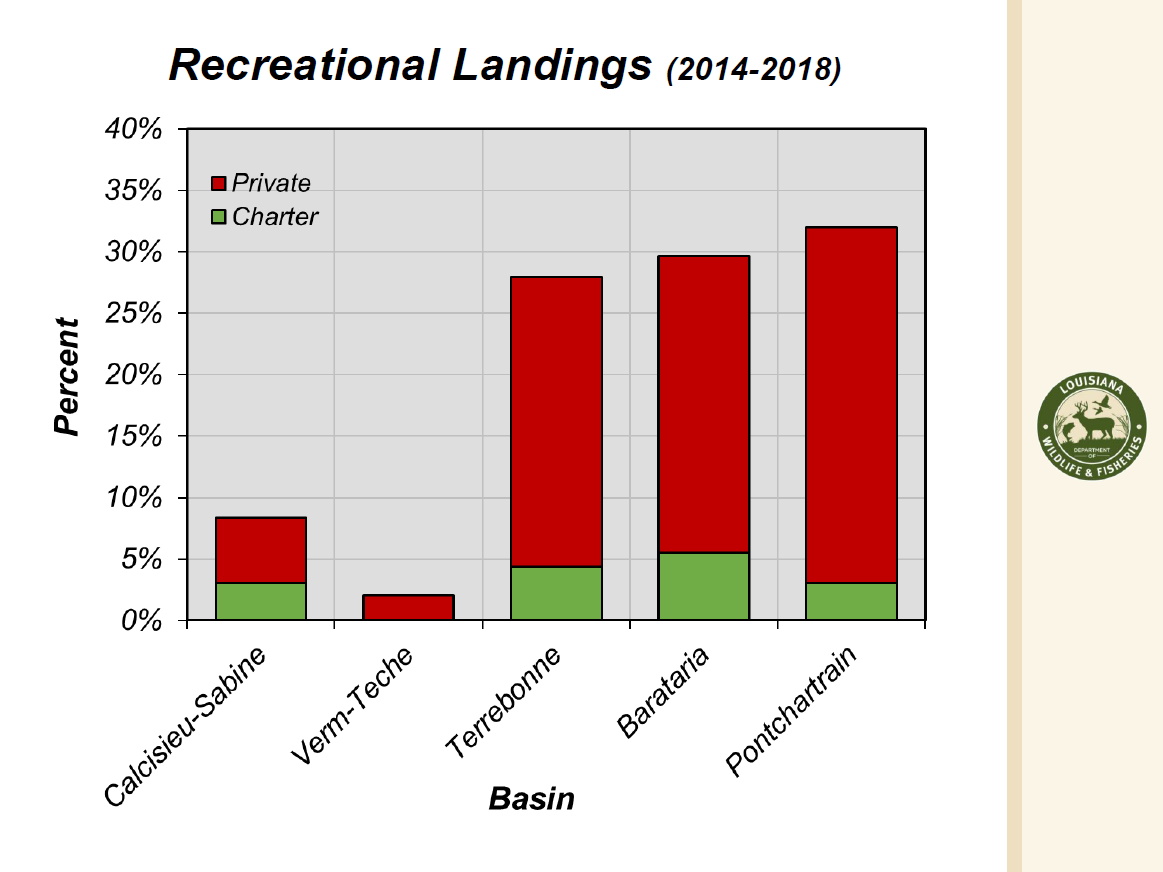 During the period from 2014 through 2018, LA Creel data indicates that, statewide, about 16 % of trout landings come from charter fishermen. 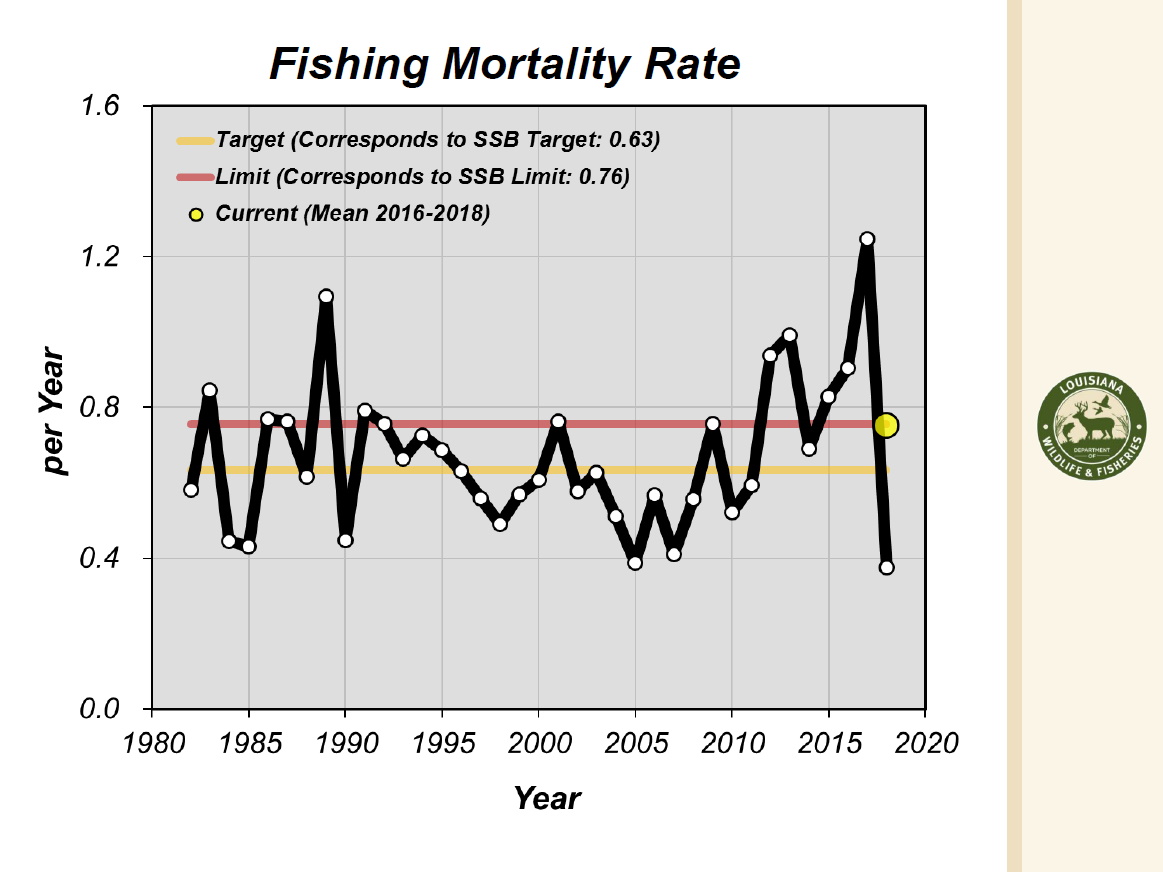 Data indicates that fishing mortality (has continued to rise over the years, despite the drop in recreational landings and spawning trout biomass.

“You can see a wide swing in the last two years,” Adriance said. “Part of this relates to that winter kill we had (2017-18). We know we had a reduction in biomass after that winter kill. But the current mean (average) is still below that red line.”

The increase in fishing pressure and decline in recreational landings may be associated with anglers’ anecdotal reports of poor catches of speckled trout and fish of quality in the Lake Pontchartrain Basin, the Venice Delta area and the Calcasieu Basin. Such reports have increased over the past five years.

Overfished stock since 2014; and overfishing occurring 6 out of 10 most recent years 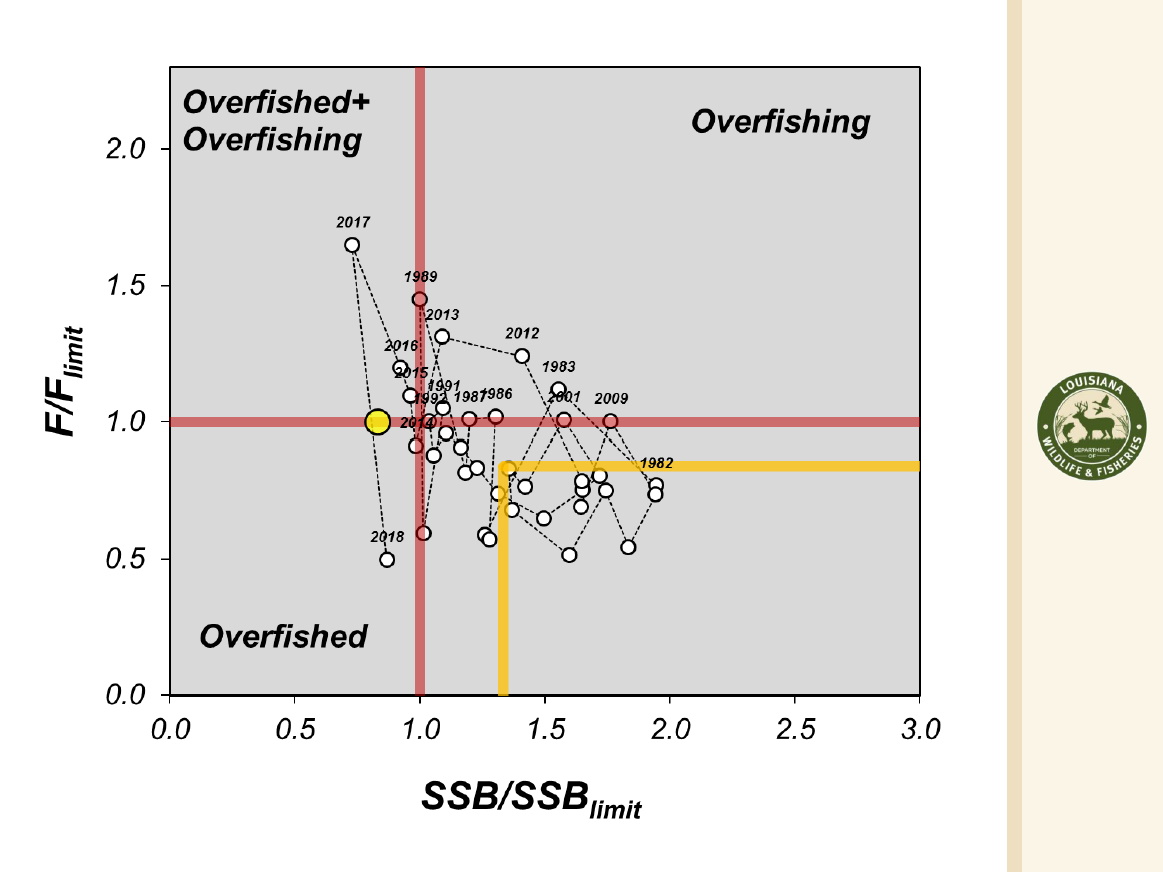 The slide above illustrates the interaction of spawning biomass and fishing mortality.

“Inside that yellow box is where we want to be,” Adriance said. “As you can see, we are in that overfished and overfishing quadrant, and this (slide) just tracks that through time. 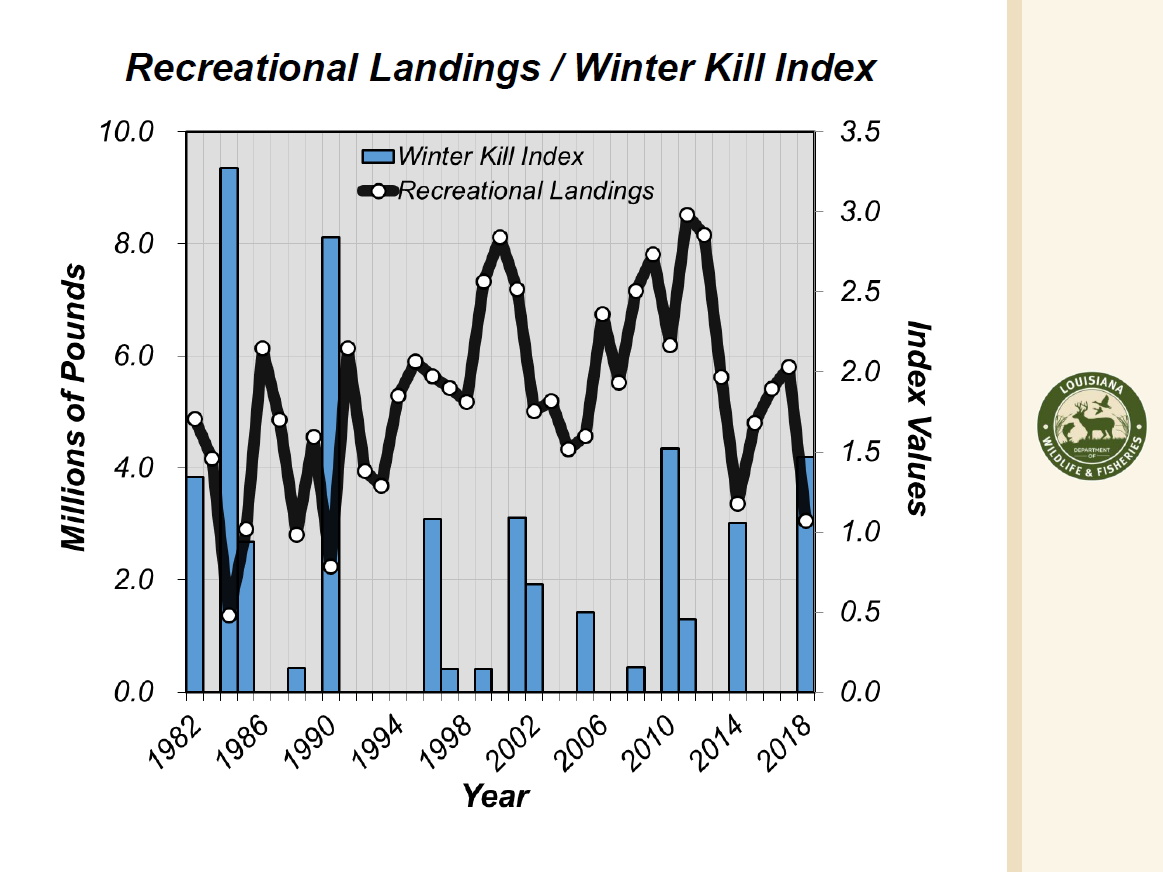 The problem with persistent overfishing is that speckled trout biomass could eventually fall and reduce numbers of young speckled trout entering into the adult fishery (recruitment).

The possibility of low recruitment due to overfishing can be significant especially if it occurs during winter-kill years (slide 8) leaving trout stocks weak and slow to rebound in following years. 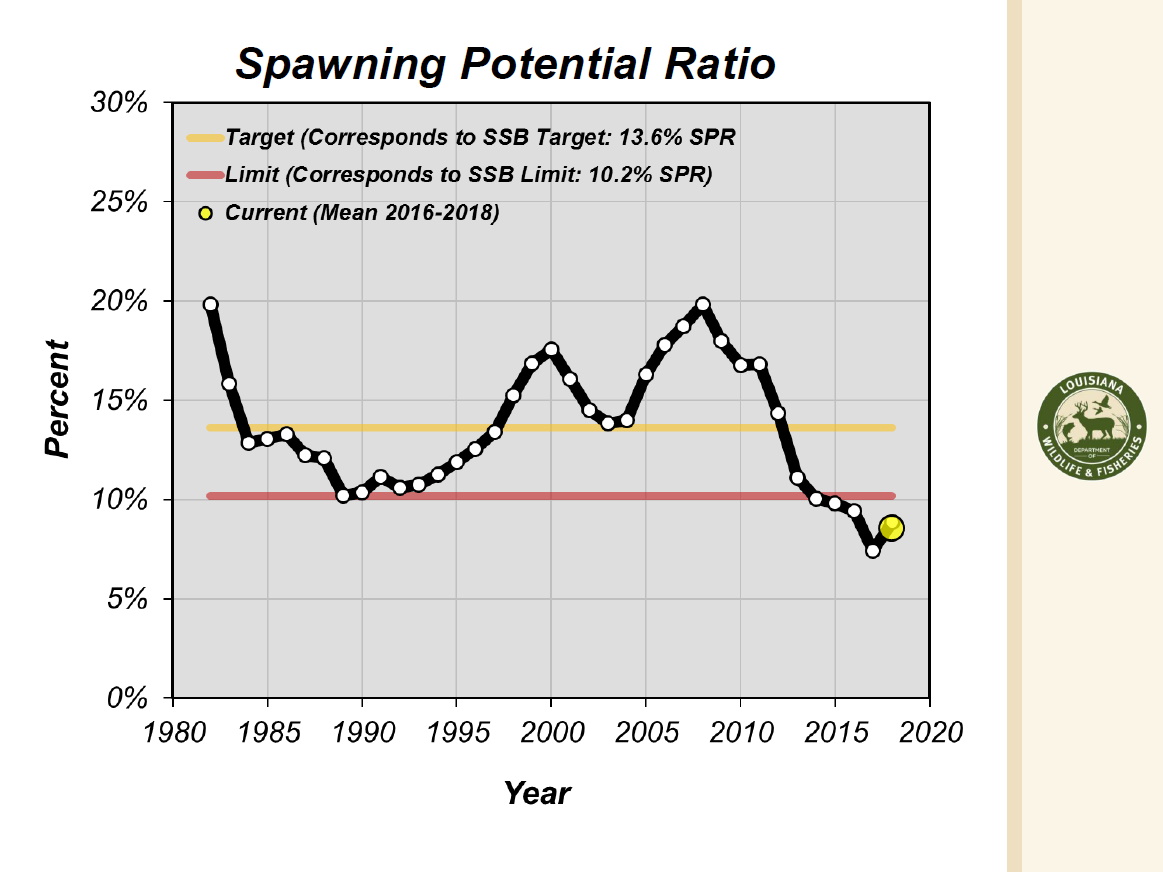 A conservation standard of 18% SPR has been set traditionally for Louisiana’s speckled trout after years of studying their populations. Louisiana is now aiming for an even lower % SPR by as much as 4.4%.

Other states manage trout populations at 10% to 15% above a higher conservation standard than Louisiana, thereby adding a margin of safety against significant increases in fishing pressure occurring at times of environmental stress on the habitat.

Next steps for the Commission

David Cresson, Louisiana Coastal Conservation Association (CCA) executive director, was among the 50 members of the public attending the meeting.

“I think we need the time to learn a lot more because everyone in the fishing community is concerned,” Cresson said. “We need to see more information before rushing into any judgements.”

According to Cresson, the 23,000 member Louisiana CCA has always led the way to positive fisheries management.

“When we fully understand the science regarding the variables at play, this will guide us going forward to the best possible management efforts in Louisiana,” he said.

According to Rene LeBreton, LDWF public information director, there were 50 attendees at the meeting, and 99 others viewed via the Go-to-Webinar online session.

No attendee offered any public comment at the meeting regarding the stock assessment agenda item.